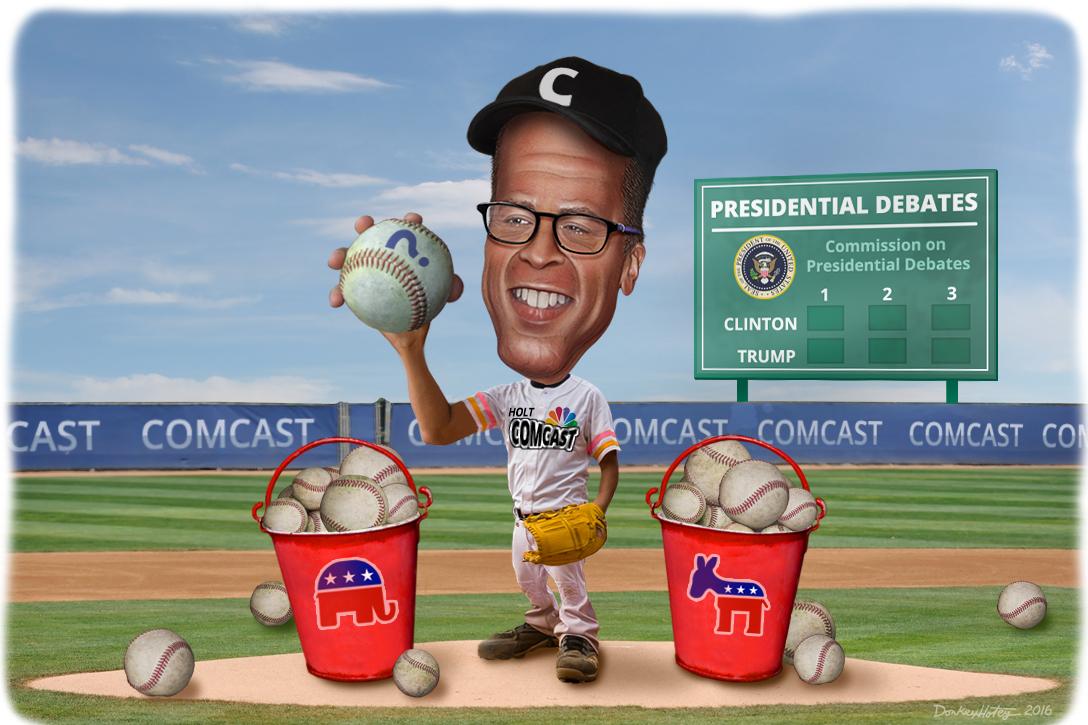 Will Lester Holt Lob Softballs or Bring the Heat?

Ahead of the presidential debates, campaigns like to play the “expectations game.” The rules are simple: Make your candidate look like a bumbling, barely coherent idiot and the opponent like a master orator. That way, you can always claim that your candidate “outperformed” while the opposition bombed.

But in presidential debates, it takes three to tango: This year, a particular spotlight has been placed on the moderators — and our expectations are low.

If there had ever been a time for moderators to step up their game, this would be it. The reason is simple. Neither candidate is a paragon of honesty: More than two-thirds of voters don’t think that Hillary Clinton is honest and trustworthy, while Donald Trump has told more documented lies on the campaign trail than any candidate in history.

But “Fox News Sunday” host Chris Wallace has already said he does not think he should be a fact checker, whose job it is to point out any lies the candidates tell. Unsurprisingly, that is a view Trump shares, while Clinton communications director Jennifer Palmieri said it is the job of a moderator to call out lies right away. “To not do that is to give Donald Trump a very unfair advantage,” she added.

The pressure in the first debate is on moderator Lester Holt. The host of “NBC Nightly News” can do much more than simply pointing out lies. He can push both candidates by asking tough questions that require specific answers and not just rehearsed rhetoric.

But throughout history, moderators have often lobbed softballs instead of throwing heat.

In fact, the very first question ever asked at a presidential debate was an invitation for John F. Kennedy to swing away.

“Senator, [Vice President Richard Nixon] in his campaign has said that you were naive and at times immature. He has raised the question of leadership. On this issue, why do you think people should vote for you rather than the vice president?” Bob Fleming of ABC News asked on September 26, 1960.

Since then, a lot of candidates got easy questions that allowed them to just drone on with platitudes instead of providing details. That’s not good enough today. Voters deserve answers.

Here are some of the questions we would like to hear Hillary Clinton asked:

You want Edward Snowden to “face the music” for blowing the whistle on the National Security Agency (NSA). What about high-ranking officials of the intelligence apparatus who lied about their activities? Should they also face the music and, if so, what punishment for them do you suggest?

You flip-flopped once on the trade deal called the Trans-Pacific Partnership (TPP). What assurances can you give the American people that you will not change your opinion again once you are in office?

President Obama has vetoed legislation that would allow the families of 9/11 victims to sue Saudi Arabia. As a former US Senator who represented New York in 2001, would you sign the legislation? If yes, does that mean you believe there is more to Saudi involvement in the attacks than we know?

Here are some of the questions we would like to hear Donald Trump asked:

Why you do keep saying you opposed the war in Iraq from the beginning when this clearly shows that is not true?

You said you want to “open up our libel laws so when [newspapers] write purposely negative stories … we can sue them and make lots of money.” How would you change the law or the Constitution to accomplish this?

Deutsche Bank, a financial institution that has loaned you vast sums of money, was recently fined $14 billion. What assurances can you give the American people that you would not leverage your position as president to settle your hundreds of millions of dollars in debt with foreign banks, for example, by reducing the fines they have to pay?