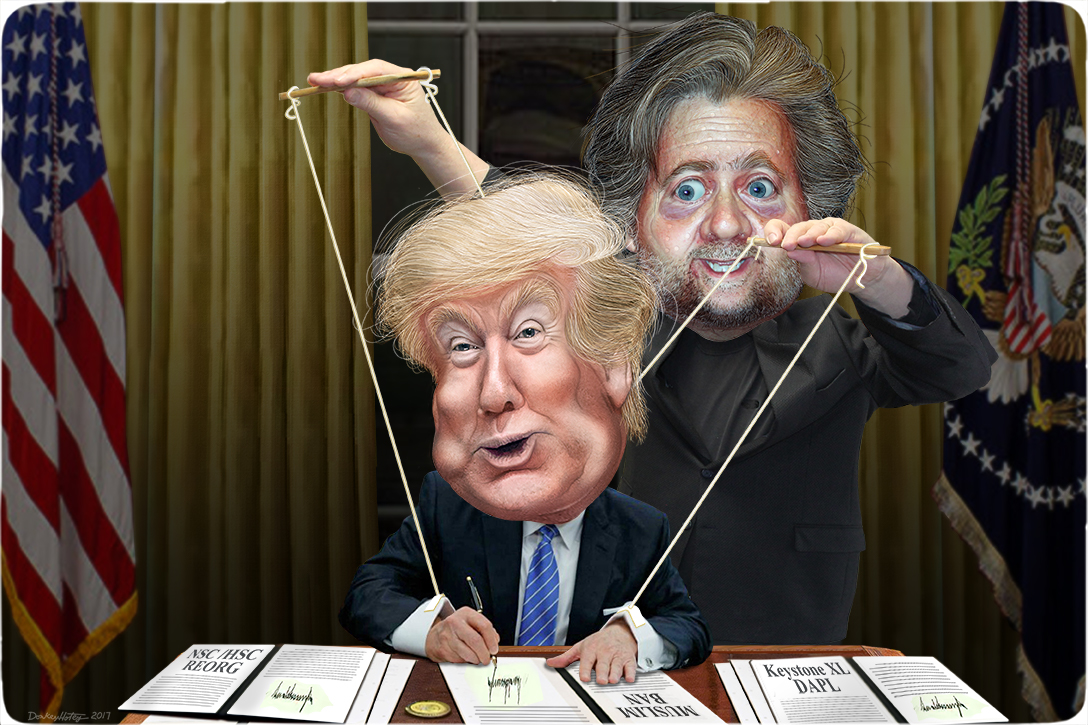 Will Bannon’s Puppet Give Him the War He Wants?

What do you do if you believe that your beloved white race is in an existential battle but it is not fighting back? In Steve Bannon’s case, the answer seems to be: You find yourself a puppet, get him elected President of the United States and make sure everybody realizes that this war is happening.

Bannon, the de-facto president Donald Trump’s chief strategist and National Security Council member, believes that the “Judeo-Christian West” has been in an epic conflict for years without recognizing the scope of this fight.

The former Breitbart chief laid out that part of his worldview when he did a Q&A via Skype as part of a conference held inside the Vatican in 2014.

“We have to face a very unpleasant fact. And that unpleasant fact is that there is a major war brewing, a war that’s already global,” Bannon told his audience in response to a question of whether secularism or the Muslim world were a bigger threat to the Judeo-Christian civilization.

He added a sense of urgency, noting that this threat has to be confronted immediately.

“Every day that we refuse to look at this as what it is, and the scale of it, and really the viciousness of it, will be a day where you will rue that we didn’t act,” Bannon said.

Since he made that statement, 954 days have passed — and Bannon is finally in a position to do something about it.

In Trump, he has found the perfect vessel. An insecure man looking for validation who can be coaxed to spring into action without much thought.

The self-proclaimed billionaire was not the first know-nothing whose coattails Bannon had hoped to ride into the White House. Before taking over Breitbart, he had courted 2008 vice presidential candidate Sarah Palin — another populist who wanted to drain the swamp and put America first — and tried to coax her into taking on President Barack Obama in 2012.

When Palin declined to run, Bannon had to sit on the sidelines for four more years before springing into action again. He made good use of that time by whipping the GOP’s Tea Party base into a frenzy with his far-right publication.

One question remains: Now that he has his hands on the levers of power, what is Bannon going to do? The Executive Order to seal off the US for people from seven Muslim countries was just the first step. ISIS, which is itching for a fight as much as Bannon, hailed that move, hoping it would lead to Muslims in the US turning against the country.

Next up might just be a confrontation with Iran. Trump has already tweeted that he put the country “on notice” for conducting a ballistic missile test. After that, who knows? One thing seems for sure: With both ISIS and Bannon determined to show that there is a global war happening between Muslims and the “Judeo-Christian West,” chances are that the world will take notice real soon.