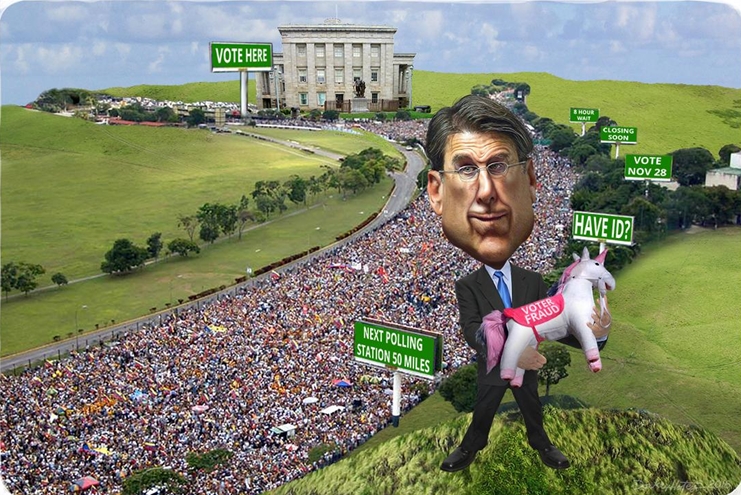 Voter Fraud: A Solution in Search of a Problem May Disenfranchise Millions

On Thursday, Terri Rote made national news. She was arrested after trying to cast votes for Donald Trump at two separate polling stations in Iowa. Rote now faces up to five years in jail.

The reason her case has attracted so much attention is that it is the only instance of in-person voter fraud so far this year — out of nearly 20 million votes that have already been cast.

Even though that is a tiny percentage, we are still ahead of the average. The most cited study on the issue has identified 31 possible cases of in-person voter fraud out of almost 1,000,000,000 ballots cast.

Why is it such a rare crime? Because, no offense to Ms. Rote, only a moron would commit in-person voter fraud. The penalty for getting caught is off the charts compared to the benefit of casting one additional vote.

It’s the equivalent of finding a single termite in a house and burning it down as a remedy.

Some of these Voter ID laws were struck down — either fully or in part. The court rulings leave little doubt what the motivation was for passing them in the first place.

“Although the new provisions target African Americans with almost surgical precision, they constitute inapt remedies for the problems assertedly justifying them and, in fact, impose cures for problems that did not exist,” said the decision in the North Carolina case.

The court noted that “the State has failed to identify even a single individual who has ever been charged with committing in-person voter fraud in North Carolina.”

While the concept of showing identification to vote might not be bad — and has broad public support — it only works if the government can assure that every single voter can easily obtain this ID at no cost. But that is never the goal when it comes to these laws.

Take Alabama, for example. After the 2014 Shelby County vs. Holder Supreme Court decision, which made it easier for states with a history of bad civil-rights records to disenfranchise minority voters, the state passed a more stringent Voter ID law — and then promptly tried to close DMV offices in the counties with the highest percentage of black voters.

That shows how ridiculous it is to pretend that these laws are about fighting the phantom crime of voter fraud. Indisputably, they are a cynical attempt by Republican-run states to hang on to power by any means necessary — even if that means disenfranchising millions of voters.

Voter ID laws are only one piece of the puzzle. Not allowing felons to vote, even those who have already repaid their debt to society, as well as attempts to reduce early voting opportunities are all part of these Machiavellian schemes.

The election is not being rigged by a handful of idiots like Ms. Rote but instead by hundreds of state lawmakers who would rather try to keep certain groups of people from casting their ballots than compete for their votes by instituting policies such voters favor.