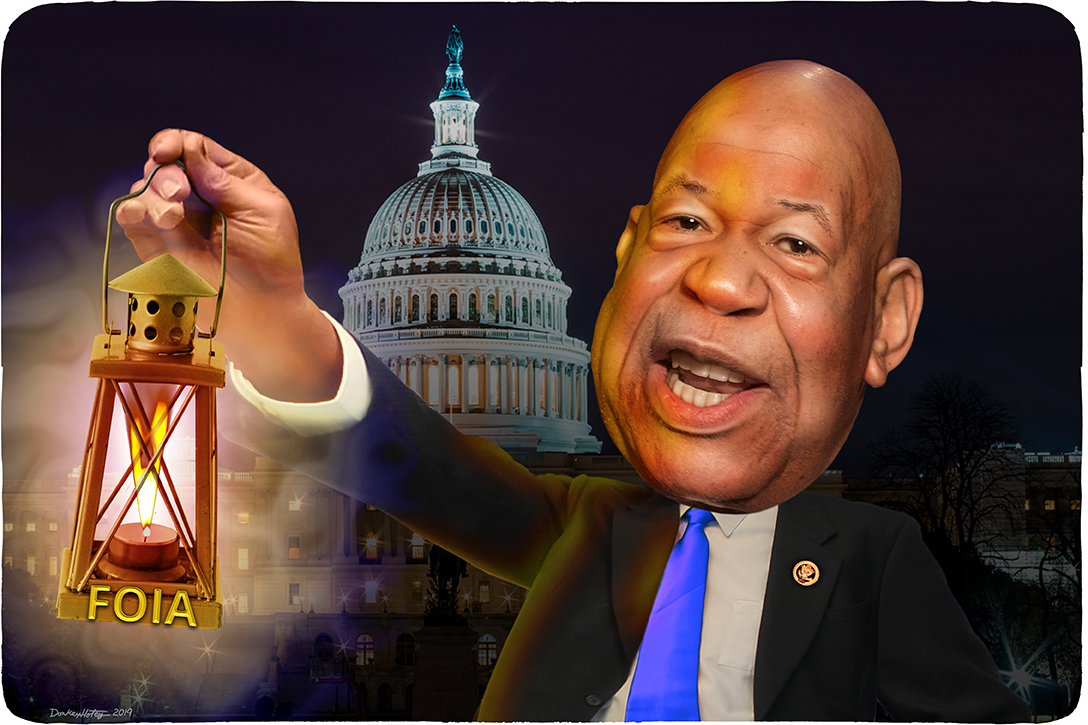 Trying to See Through the Trump Fog

It was National Freedom of Information Day in Washington on Friday, but the members of Congress, journalists, and transparency advocates who gathered at the Newseum seemed well aware of the irony of celebrating openness in the era of Trump.

The passage in 2016 of a bipartisan law strengthening the 1967 FOIA (Freedom of Information Act) was a victory for transparency activists. But since then, the Trump administration has imposed unprecedented obstacles to accessing federal information. And many state lawmakers are also engaged in what one participant termed a “nonstop assault” on FOIA.

At the same time, local newspapers continue to hemorrhage jobs, leaving many communities in “news deserts,” depriving them of even basic knowledge of what their local and state representatives are doing that will affect their lives.

Citizens’ rights to privacy — which activists deem as important as their right to public information — are also being jeopardized by new technology being used by local, state, and federal law enforcement and immigration offices to monitor their activities.

Even the setting for the annual event — the glitzy Newseum — was a reminder of the precariousness of journalism, and access to information. The Freedom Forum foundation was the major funder of the multi-million-dollar high-tech tourist attraction near the capitol’s major sites. It opened in 2008. Foundation founder Allen Neuharth started USA Today, the flagship daily of what was once the prosperous Gannett newspaper chain.

But Gannett has been shrinking its news staffs, and now may be purchased by a hedge fund known for slashing the staffs of the papers it buys. And the Newseum, which celebrates press freedom, has been sold to Johns Hopkins University, and will be looking for smaller digs in a year or so.

National FOIA Day occurs close to Sunshine Week, timed to coincide with the March 16 birthday of James Madison, father of the Bill of Rights.

While the events vary from year to year, resignation seemed to be the mood for 2019. Advocates “were far more critical” during the Obama years, veteran transparency advocate Patrice McDermott told WhoWhatWhy. Obama had aspired to be the most transparent administration in history, so activists held him to a “higher standard,” she said.

The Obama administration “made great strides” in making government data accessible, she added. “But when it came to the nitty gritty of letting people know what the government didn’t want them to know,” she said, “it’s the same for all administrations.”

With Trump, she said, open government activists “just expect the worst. The mood is, ‘How do we survive?’”

Granted, advocates were heartened that a Democratic majority in the House now was primed to hold the Trump administration more accountable. But the prospects for actually changing administration policies remained dim. Indeed, US Rep. Elijah Cummings (D-MD), chair of the House Oversight and Reform Committee, and the son of two evangelical ministers, put the current state of affairs in nearly apocalyptic terms. “Two hundred years from now, people will be reading about this period,” he said.

Cummings listed some of the failings of the Trump administration: “the press being suppressed,” the White House warning career civil servants “not to be whistleblowers” and resisting Congressional oversight, and “our CIA and our FBI being attacked.”

“Future generations will ask: ‘What did you do?’” Cummings challenged the journalists in the room.

But he also stressed that his critique of the current White House was not based on partisan loyalty. “I’m a bipartisan guy,” he said. In 2013, even though then-chair Rep. Darrell Issa (R-CA) “shut off my microphone” during a hearing, he continued to work with him to strengthen FOIA. “It took us three years of hard work and negotiation,” but with the help of Senators Patrick Leahy (D-VT) and John Cornyn (R-TX), “we got it over the finish line” in 2016.

As chair, Cummings said he’s committed to holding federal agencies accountable for their compliance with the new FOIA law. Next week, he said with some relish, officials from the Department of Justice (DOJ), the Environmental Protection Agency (EPA) and the Department of Interior (DOI) will be testifying before him.

Cummings said he also plans to “bring in” Wilbur Ross, head of the Department of Commerce, to explain why he misled the public about the reasons for adding a citizenship question to the US census form. “Experts warned this could harm the census,” he charged. “Ross’s own people said, ‘Don’t do it.’” US Rep. Elijah Cummings (D-MD), chair of the House Oversight and Reform Committee, received the 2019 Sunshine in Government Award from the News Media for Open Government coalition at an event in Washington, DC. Photo credit: C-SPAN

“When we’re dancing with the angels,” he concluded, somebody will read about what we did. But … you have got to write it.”

Of the members of Congress misidentified as alleged lawbreakers, 40 percent were people of color. This technology, he charged, is “deeply flawed,” and its use may have “severe consequences” for those who are misidentified, particularly for African Americans, Latinos, and immigrants. It could easily lead to “deadly interactions” between law enforcement and the public, he predicted.

Panelists discussing facial recognition made similar points. The budget for the Department of Homeland Security has tripled since 2003, said Paromita Shah, associate director for the National Immigration Project of the National Lawyers Guild.

Immigration and Customs Enforcement (ICE) now is spending “billions of dollars” on facial recognition and other high-tech tools to identify, detain and deport immigrants, Shah charged, with the relationships between big corporations like Amazon and government agencies largely forged in secret, with very little accountability.

Despite these dangers, there has been “a deep bipartisan consensus” that the use of technology in law enforcement “is a good idea,” she said, adding that there hasn’t been much scrutiny of what these high-tech tools can do, whether they are as accurate as companies claim, and how they may reinforce racial bias.

“We have never had a public conversation” on how ICE, “particularly in the Trump administration, is deploying this technology,” she said. Jake Laperruque, senior counsel, for the government accountability nonprofit, the Project on Government Oversight, added that Americans have to consider how much living their lives “in obscurity” and “not being noticed” when walking into a medical clinic, lawyer’s office, or an Alcoholics Anonymous meeting — matters to them.

He noted, however, that there may be growing bipartisan support for regulation as public awareness of facial recognition increases. “Hopefully that can lead to good policy.”

Another bright spot, added Amie Stepanovich, US policy manager for the international digital rights group, Access Now, is the response of tech employees. Their opposition, she said, “has inspired changes at the corporate level.” A protest by hundreds of Google employees appears to have forced Google to cancel its plans to develop a project to collect data for the Chinese government.

Less bright, however, was the prospect of fewer journalists to write about both the dangers of government surveillance and the benefits of government transparency.

Between 2008 and 2017, according to Pew Research Center, newsroom employment dropped by 45 percent. A University of North Carolina study identified at least 900 communities that have lost all their media outlets since 2004.

Tom Verdin, a national editor with the Associated Press, recounted some of the grim statistics. Between 2008 and 2017, according to Pew Research Center, newsroom employment dropped by 45 percent. A University of North Carolina study identified at least 900 communities that have lost all their media outlets since 2004.

In the past, the AP, along with other journalism groups, has used Sunshine Week as an opportunity to showcase the “importance of open government and freedom of information,” often releasing in-depth investigative stories.

But this year, the AP focused on journalism itself. “We kept coming back to one of the dominant narratives in our industry today… The struggles of local news outlets, which has led to papers closing” and job cuts.

“This overriding narrative posed a question: Despite all our efforts at promoting transparency, what if, in certain communities around the country, there was no one left to shine the light?”

The AP sent a reporting team to Waynesville, MO, to chronicle what happened when a community of 11,000 lost its newspaper in 2018.

The AP team profiled one lone blogger who writes about news events in the town and uses Facebook to share his stories. “We think we came away with a compelling story,” Verdin said.