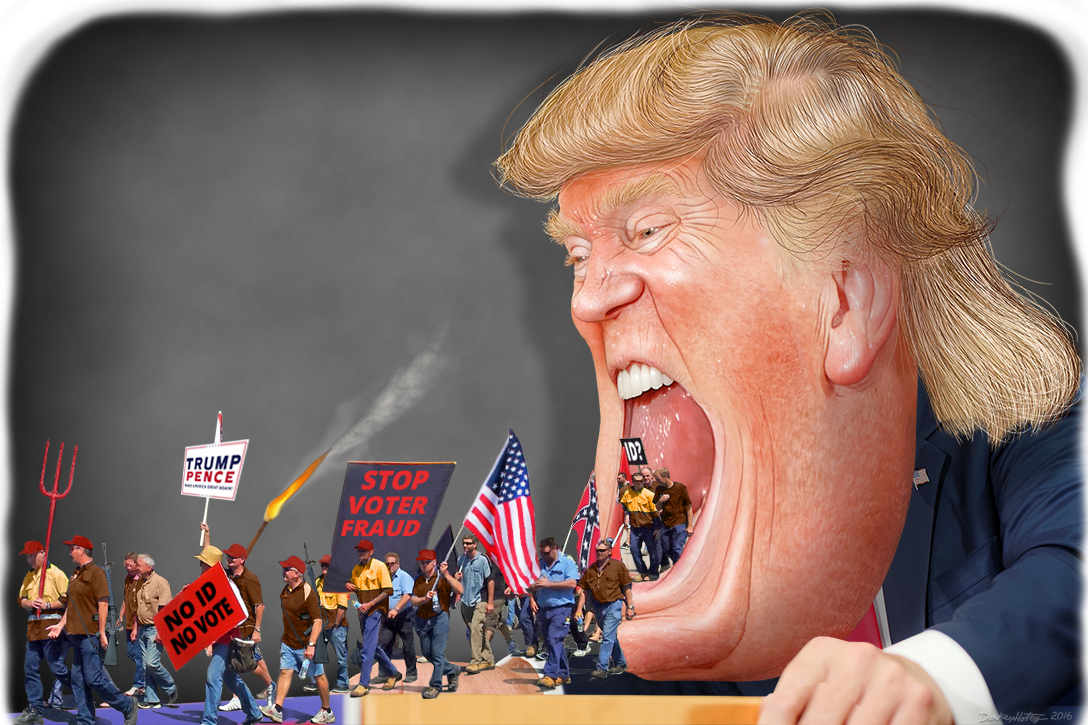 On the morning of November 8, “Jerome Blackman,” from a ghetto in Philadelphia, shows up at his polling place to cast a vote for Hillary Clinton. The presidential race is tight and everybody knows that it will be decided by Pennsylvania.

Blackman, a welfare recipient who clearly does not want America to be great again, is aware of the importance of every single vote and lines up to cast a second ballot — this one in the name of his cousin who is doing eight months for assaulting a police officer during a Black Lives Matter protest.

However, before he can vote for Clinton again, a heroic poll watcher realizes what is going on. The volunteer, who followed Donald Trump’s call to carefully monitor the Pennsylvania election, calls out Blackman:

“Excuse me sir. I already saw you vote once. I hope you know it is a crime to vote multiple times.”

That might be the type of scenario Trump envisioned when he said at a rally in Pennsylvania — where he was trailing by 10 points at the time — that he would only lose the state if the election were rigged.

“I hope you people can sort of not just vote on the eighth [but] go around and look and watch other polling places and make sure that it’s 100 percent fine,” Trump said.

“We’re going to watch Pennsylvania. Go down to certain areas and watch and study, make sure other people don’t come in and vote five times.”

That scenario, however, is as ridiculous as it is unlikely. The type of in-person voter fraud Trump describes is incredibly rare. One comprehensive study of the “problem” found 31 possible cases out of 1 billion votes cast.

Traditionally, poll watchers — those dispatched by campaigns, as well as neutral observers — serve a very useful function. They make sure polling places run smoothly and report back when there are problems. For example, they ensure that voters comply with laws prohibiting electioneering near a polling place.

Perhaps their most important function, however, is preventing voter intimidation.

However, what Trump seems to be proposing is the opposite of that. Large numbers of his poll watchers “going around and watching other polling places” in “certain areas” sounds more like a mob of Trump supporters, who are predominantly white, going into neighborhoods that are not.

“Trump’s call to action is now being promoted by white supremacists on Stormfront, the world’s leading neo-Nazi website, something that’s not particularly surprising given how Trump has been embraced by the likes of David Duke,” wrote Richard Cohen, president of the Southern Poverty Law Center, in response to Trump’s speech.

And how, exactly, would they determine if somebody has voted multiple times (and it cannot be stressed enough that this happens close to never)? Are these Trumpilantes going to quiz voters and carry lists? Because that is exactly the type of behavior real poll watchers are supposed to look out for. And, as WhoWhatWhy has reported, the real poll watchers are highly concerned about the upcoming election.

In many places, for example, they are not allowed to speak to voters. And while the website of the GOP nominee has a page that allows people to sign up for this position, the Trump campaign has a poor track record of doing the organizational things a normal campaign does. There is no guarantee that any type of instruction or training will be provided to these volunteers.

As a result, the group most likely to run afoul of the law on Election Day will not be people committing in-person voter fraud — it will be Trump supporters who show up to combat a threat as real as the fictitious Jerome Blackman.