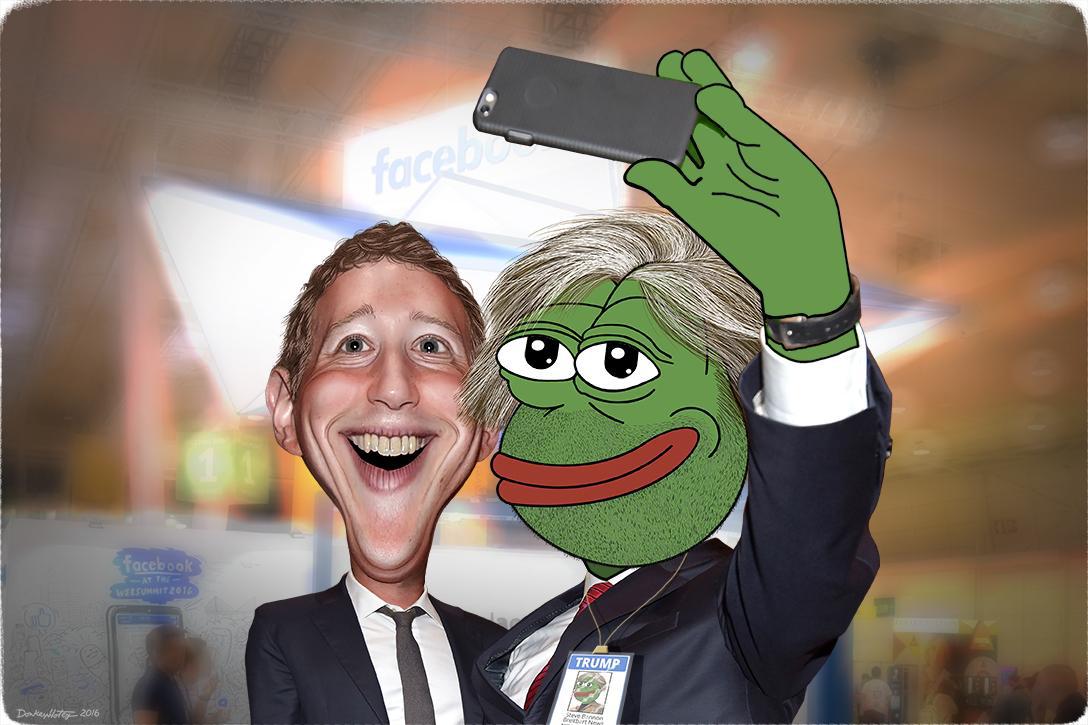 In a scandal that could upend the outcome of the election, new documents reveal that President-elect Donald Trump coerced Facebook founder Mark Zuckerberg into tweaking his website’s algorithm in a way that benefitted the GOP nominee.

Earlier this year, Facebook was accused of shutting out conservative outlets from its “Trending News” column. Trump, who was worried that this could cost him the election, spent $9 million of his own money to hire several private investigators. They were tasked with digging into Zuckerberg’s background.

They struck gold in late July, shortly after Trump had accepted the Republican nomination in Cleveland. His investigators found the smoking gun showing that Zuckerberg had screwed Eduardo Saverin out of an ownership stake in Facebook. The document further showed that Zuckerberg had not been the inventor of Facebook but, rather, had stolen the idea from Tyler and Cameron Winklevoss, which had been alluded to in the movie “A Social Network.”

In an August 3 phone call, Trump threatened to go public with the documents, which WhoWhatWhy obtained through a Freedom of Information Act (FOIA) request. That would have put Zuckerberg in a precarious situation. To ensure Trump’s silence, he agreed to help his fellow billionaire win the presidency. For his part, the GOP nominee promised to unleash Steve Bannon’s army of offshore pepe trolls.

The impact of his assistance could be noted immediately. As readers may recall, Democratic nominee Hillary Clinton had built a very large lead in the race following her convention. On August 4, she was up by 8 points in the average of national polls.

However, after Zuckerberg ordered his Facebook Premium Algorithm Loop Mapping (FacePALM) team to tweak his company’s software, the dynamics of the race changed and Trump was closing the gap quickly.

A simple change to the algorithm ensured that anti-Trump stories would no longer be visible by Facebook users who were registered as Independents. Instead, they saw a barrage of articles about Clinton’s private email server, the Clinton Foundation and rumors of Clinton’s affair with her campaign chair John Podesta.

Zuckerberg’s involvement shows the incredible power that social media companies have. WhoWhatWhy warned about the outsized impact of Facebook, Google, etc. more than a year ago and it looks as though our fears were well founded.

As you may have noticed, just about everything in this “article” is made up. Why did we write it? To highlight the growing problem of fake news.

In addition to posting it with a cartoon, we actually tried to make this story sound increasingly ridiculous, for example by calling Zuckerberg’s team FacePALM, or pretending that it was possible to file FOIA requests to get information from private persons or companies. Most importantly, we said there were documents but we didn’t provide them (although somebody who was actually trying to mislead could have forged those).

But we also wanted to demonstrate how easy it is to make something sound true-ish. We included plenty of corroborating background information, such as Trump’s rise in the polls and the accusation that Facebook censored conservative news.

The danger of fake news is that it sounds plausible, especially if the information provided confirms previously held beliefs.

In the end, however, the spread of fake news hurts everybody. Disinformation is harmful whether it comes from a government or a private citizen. We all must do our part to fight this growing problem. A special burden, however, must be placed on social media companies like Facebook, which are profiting off fake news.

One thing that is 100% true in this article is that that we warned that social media giants already have the power to sway an election.

We pride ourselves on having a diverse audience with readers from across the political spectrum who don’t just accept the official narrative and who question the things they see. We hope that you will continue to use this skepticism and join us in the fight against fake news.