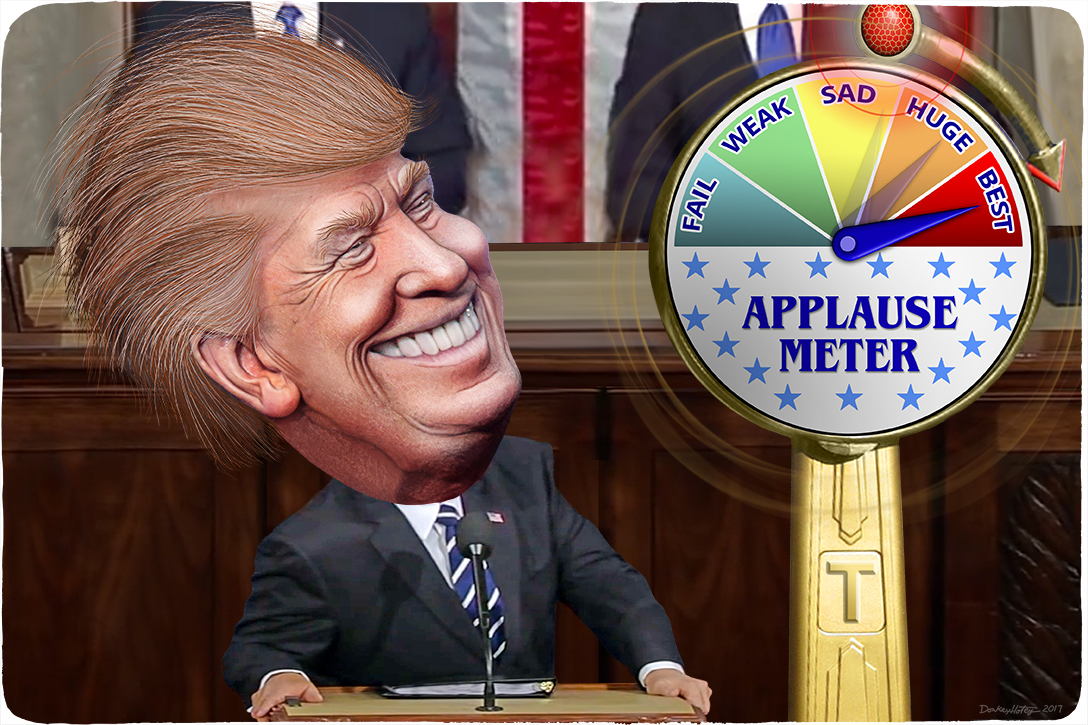 Taking a Closer Look at Trump’s Most Presidential Moment

Grand displays of patriotism invoking men and women who sacrificed much more for their country than the people celebrating them are one of the hallmarks of Washington politics. Why? Because these empty gestures work.

That once again became apparent Tuesday night when President Donald Trump addressed a joint session of Congress. Pundits widely hailed the new Commander-in-Chief’s performance — pointing in particular to an emotional moment when he acknowledged Carryn Owens, the wife of the Navy SEAL who was killed in Yemen in January.

The scene of all attendees rising to their feet to applaud a crying Owens made for great TV and created a visual that caused even hardened Trump critics to swoon.

“He became President of the United States in that moment, period,” gushed Democratic commentator Van Jones, before taking things up a notch. “That was one of the most extraordinary moments you have ever seen in American politics.”

Let’s pretend for a moment that this weren’t a ridiculous hyperbolic statement and analyze it as though it had been a truly historic moment. When we set aside the visuals, here is what Trump said:

We are blessed to be joined tonight by Carryn Owens, the widow of a US Navy Special Operator, Senior Chief William “Ryan” Owens. Ryan died as he lived: a warrior, and a hero — battling against terrorism and securing our nation.

I just spoke to our great General Mattis, just now, who reconfirmed that, and I quote, “Ryan was a part of a highly successful raid that generated large amounts of vital intelligence that will lead to many more victories in the future against our enemies.” Ryan’s legacy is etched into eternity. Thank you. Thank you.

And Ryan is looking down right now, you know that, and he’s very happy because I think he just broke a record. For as the Bible teaches us, there is no greater act of love than to lay down one’s life for one’s friends. Ryan laid down his life for his friends, for his country, and for our freedom — and we will never forget Ryan.

That’s hardly historic — and the reference to the potentially record-breaking standing ovation seems even more out of place on paper. Trump’s remarks also have to be viewed in the context of what he said earlier in the day.

Speaking to Fox & Friends, the president tried to deflect blame for his role in the soldier’s death, even though he is the one who signed off on the raid. It had been planned during the previous administration but President Barack Obama never authorized its execution.

Well, this was a mission that was started before I got here. This was something that was, you know, just they wanted to do. And they came to see me and they explained what they wanted to do, the generals, who are very respected. My generals are the most respected that we’ve had in many decades, I believe. And they lost Ryan.

A president throwing his military leaders under the bus seems more remarkable than anything Trump said before Congress. And that’s a shame, because the speech offered him a unique opportunity to try to unite a divided nation.

And just in case Van Jones is wondering what a truly remarkable address to the nation for somebody like Trump could have sounded like, here is our attempt at rewriting the speech:

I am humbled tonight by the presence of Carryn Owens, the widow of a US Navy Special Operator, Senior Chief William “Ryan” Owens. He gave his life for his country in a raid that I authorized. Earlier today, I tried to shift the blame for his death to my subordinates. That was wrong. One of my predecessors famously said that ‘The buck stops here’ and in that spirit, I ultimately bear a share of the responsibility for his death.

And that was not the only tragedy that happened that day. Reports indicate that multiple civilians, including women and children, died as a result of our attack. We need to do better to protect innocent lives in pursuit of our enemies.

Just ten days into my presidency, it was a reminder of the awesome responsibility the American people have entrusted me with. Tonight, in honor of Ryan, I will pledge to do better. I will work harder and I will do my best to improve the lives of all Americans.

An honest presidential address — now that really would have been an extraordinary event in US politics.

The cartoon above was created by DonkeyHotey for WhoWhatWhy from these images: Donald Trump caricature (DonkeyHotey / Flickr – CC BY-SA 2.0), Congress background (The White House) and applause meter (Graham C99 / Flickr – CC BY 2.0).