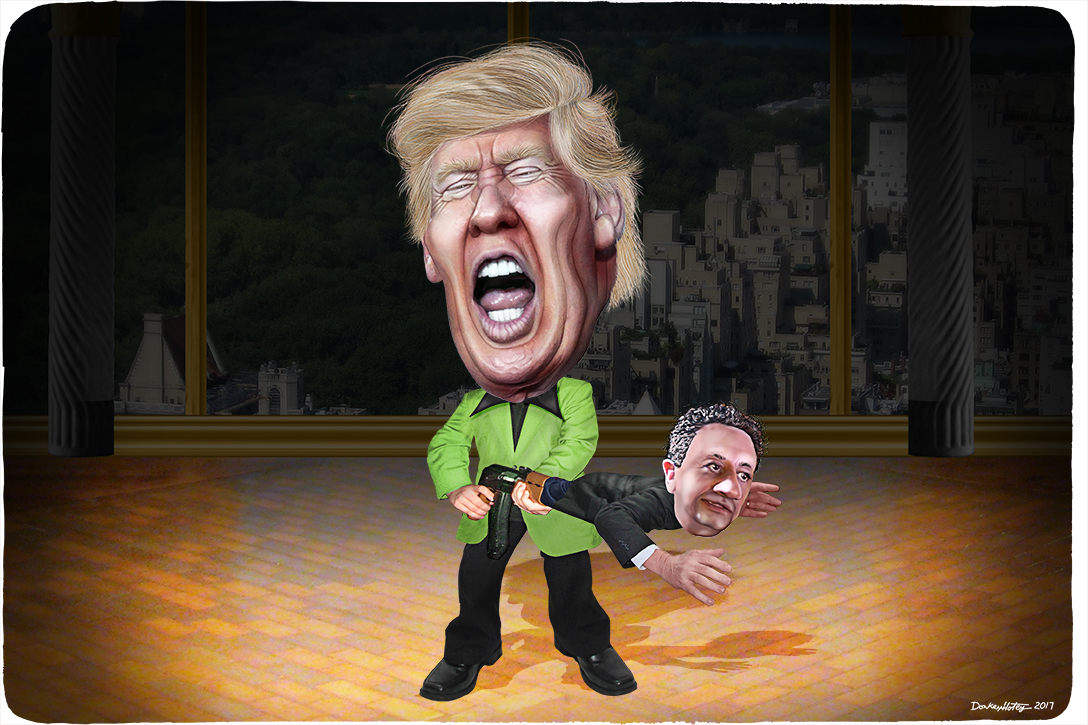 Storm Clouds over the White House

Nearly five months after the election, President Donald Trump and his administration can’t shake the “big gray cloud” hanging over the White House — in the words of House Intelligence Committee Chairman Devin Nunes (R-CA), over whose head a thunderstorm is also brewing for his role in the saga.

This past week, in no small part due to WhoWhatWhy’s own reporting, Team Trump’s ties to Russia, the Putin regime’s impact on the election, and the resulting fallout once again dominated the news cycle.

The president is probably not doing himself any favors by taking to Twitter almost daily to proclaim that “there is nothing to see here” and calling the various investigations — from Congress, the FBI and the press — a “witch hunt.” Nevertheless, his supporters are dutifully rallying around him and are trumpeting those talking points to anybody who wants to hear them — including our own message boards and social media accounts.

They claim that the Russia coverage is, to put it in Shakespeare’s words, “much ado about nothing.” But Trump doth protest too much.

So which is it, smoke-and-mirrors or smoking gun?

The answer, right now, is that it’s neither. On the one hand, a new poll shows that, contrary to the evidence, Republicans truly believe this is all a media conspiracy. Nearly two-thirds of them think Russia did not interfere in the election, while almost three-quarters say it is very or somewhat likely that outgoing President Barack Obama wiretapped Trump’s offices.

But lawmakers from both parties agree that Russia did interfere while Trump’s wiretapping claim is more than likely bogus.

On the other hand, it is true that there is no evidence so far that proves the Trump campaign conspired with Russia to throw the election its way in return for a promise to do Putin’s bidding later.

However, to carry the metaphor to its conclusion, where there is smoke, there is very often fire. And in this case, there is a lot of it. In fact that cloud over the White House might as well be a billowing plume of smoke.

From Paul Manafort, Roger Stone and Carter Page to the false statements made by Michael Flynn and Jeff Sessions, from Trump’s business dealings and his own statements on the Ukraine language in the GOP platform — the links to Russia and unresolved questions are everywhere.

There is a lot of stonewalling and none of it looks good. And there are a lot of Russians who are somehow involved in this who keep showing up dead.

And then there is Felix Sater, whom we focused on in our major exposé. The former felon with ties to the Russian mob became an FBI informant and helped the CIA before doing business deals with Trump. Working out of Trump Tower, Sater had business cards that identified him as a “Senior Adviser to Donald Trump” and included a phone number and email address provided by the Trump Organization. He also travelled with the Trumps. That’s a whole lot of Trump!

According to the president, however, he couldn’t pick Sater out of a lineup. At least that’s what he said in a 2013 deposition.

However, he won’t have to pick him out a lineup because Sater is protected by the FBI, for example by Gary Uher, who apparently was one of his handlers. You know who is also protected by Uher? Donald Trump, who has hired the former FBI agent to handle his security — even after the Secret Service took over Trump’s protection.

At a sentencing hearing for his role in a “pump and dump” investment scheme, Sater was represented by two former government attorneys, who went on to join the law firm of Morgan, Lewis & Bockius. That firm, whose Moscow office was named the 2016 “Russia Law Firm of the Year,” is now entrusted with sorting out Trump’s many potential conflicts of interest.

And what is Sater up to? He won’t talk to us but last we knew, Sater, and Trump’s personal attorney Michael D. Cohen, lobbied Flynn, then still the National Security Adviser, with a scheme to lift sanctions on Russia, imposed after it annexed Crimea.

Although this may not be a smoking gun, it certainly begs for thorough investigations — both from the government and the media. We will continue to play our part because the American public needs to know the answers that Trump and his team are so far unwilling to give.