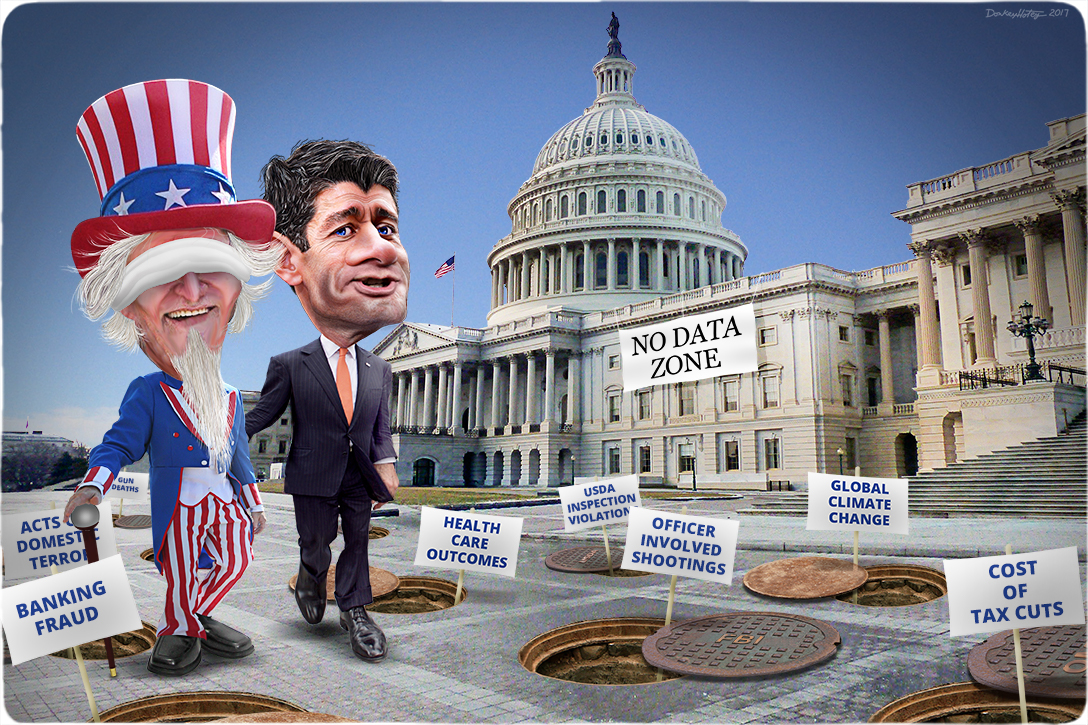 The Republican War on Facts

“I am a firm believer in the people,” Abraham Lincoln supposedly once said. “If given the truth, they can be depended upon to meet any national crisis. The great point is to bring them the real facts.”

While Republicans love to refer to themselves as the “Party of Lincoln,” they seem to disagree wholeheartedly with the sentiment of this quote. They certainly don’t want the American people to have facts — and nobody in their right mind would ever refer to their current standard-bearer as “Honest Don.”

The GOP’s “War on Information,” however, goes back much further than the current national gaslighting campaign spearheaded by Donald Trump and Kellyanne Conway. Republicans and their allies have been fighting against facts for years.

One of the best-known examples is the so-called Dickey Amendment, which was first passed in 1996 and effectively ended the Centers for Disease Control and Prevention’s research on gun violence. Rep. Jay Dickey (R-AR), after whom the amendment is named, has since expressed regret that the language he introduced has had that effect on this type of research.

In the area of climate science, the fossil fuel industry and its GOP allies in Congress have been trying to obscure facts for decades through a well-funded campaign. Most recently, this effort included trying to cut back funding for climate change research conducted by NASA and the National Oceanic and Atmospheric Administration and denying funds to the Department of Defense to investigate what impact the warming of the planet would have for the US military.

Last year, Republicans also backed an effort to prevent the IRS from collecting information on big money donors who give to nonprofit organizations, many of which are used for influencing elections. While national sunshine groups opposed that legislation, the Koch brothers supported it.

With Trump in the White House and a GOP majority in Congress, these (and many other) efforts to keep the government from collecting data that could prove harmful to those funding the Party of Lincoln will likely be revived and expanded this year.

But the Republican anti-information crusade is not limited to big ticket items that capture national attention, such as gun violence or climate change.

A little-known bill introduced last month by Sens. Marco Rubio (R-FL) and Mike Lee (R-UT) —  called the “Local Zoning Decisions Protection Act of 2017” — would prohibit the use of federal funds “to design, build, maintain, utilize, or provide access to a Federal database of geospatial information on community racial disparities or disparities in access to affordable housing.”

We don’t know what such a database would show but we also see no reason why there shouldn’t be one. Republicans obviously feel differently.

In addition to trying to prevent the gathering of new information, there is also a growing concern that the Trump administration will fudge existing data – in areas far more important than, for example, determining how many people showed up at the inauguration.

According to the Guardian, “US statisticians are concerned that Donald Trump’s administration might suppress or manipulate public statistics that don’t fit his narrative of the truth.”

The reason that Republicans seem to be at war with information-gathering — or facts in general — goes beyond GOP lawmakers doing the bidding of their wealthy backers: The more educated voters are, the more likely they are to back a Democrat.

In November, Trump held an 8-point edge over Hillary Clinton among voters who did not have a college degree. This already significant gap jumps to a stunning 39% among whites. In George Orwell’s 1984, this is referred to as “Ignorance is strength.”

But it would be incorrect to assume that Republicans don’t recognize the value of information gathered by the government. In North Carolina, for example, state GOP lawmakers were suddenly very interested in data collected by the Tarheel State that showed how people voted and what kind of IDs they had. They then turned around and used that information to write a law that would make it more difficult for minorities to vote.

What all of this means is obvious: By fudging existing data and preventing the collection of any information deemed undesirable by Republicans, the GOP can create an “official” alternative reality in which the world isn’t warming, people who lost their health insurance aren’t dying, acts of terrorism are only committed by Muslims and millions of people show up whenever Trump speaks.

Abraham Lincoln would counsel against this course, because he also said: “If once you forfeit the confidence of your fellow-citizens, you can never regain their respect and esteem.”