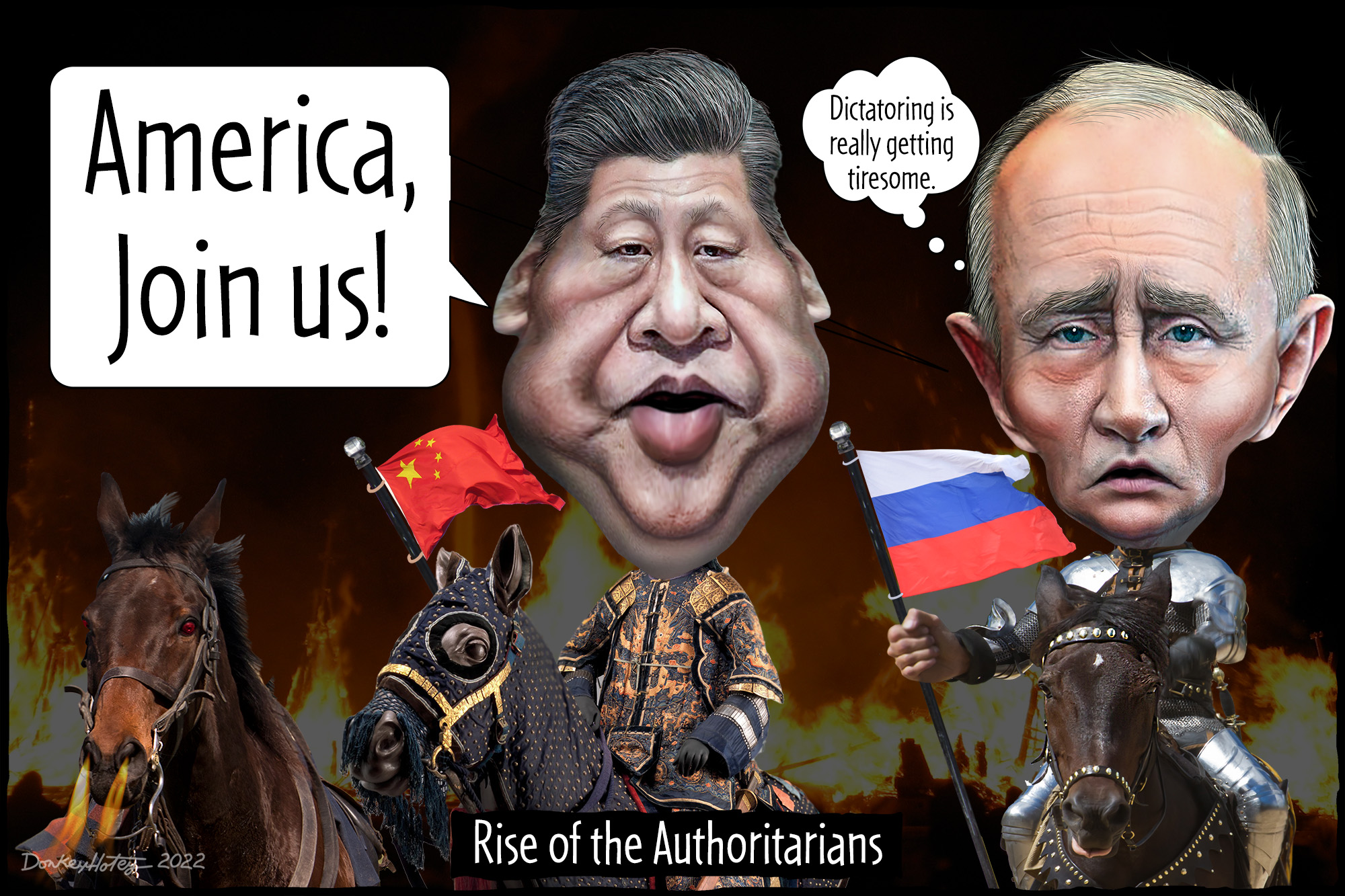 Quo Vadimus — Where Do We Go?

Any comparison of Payton Gendron’s mass murder in Buffalo to the mass assault on the Capitol on January 6 might seem like something of a stretch.

After all, the deadly January 6 riot resulted from the inability of Trump Republicans to accept an election defeat. The slaughter of 10 people in Buffalo looks more like a one-off act by a deranged racist, obsessed with internet memes propagating the “great white replacement theory.”

But what if both were, in fact, symptoms of the same underlying malaise in American life: an existential frustration best expressed in the 1976 movie Network, when an aging TV anchorman explodes on camera, “I’m as mad as hell and I’m not going to take this anymore” — and half the country echoes his angry chant.

What connects both incidents is a growing sense that the political polarization gripping the country has begun to shake the very foundations of law and order, of civilized behavior itself. In this new world, it is everyone for themselves.

The angry protagonist in Network was worried about losing his job. What frustrates and enrages Trump Republicans and white supremacists is the spread of social change that promises a broader, more diverse picture of humanity. As both Buffalo and the attack on the Capitol show, an inability to deal with social change — and fear of those who promote it — can lead some people to kill, especially when they want to attract attention to their cause.

Despite increasing violence, the US still considers itself part of a world order that respects traditional values and the rule of law. But we can no longer avoid asking the question: For how long? And not only here, but in the rest of the world as well. Russian President Vladimir Putin closed down the last remnants of independent media and political opposition in his country  when he invaded Ukraine. China’s Xi Jinping, observing the years-long paralysis in Congress, has argued that political stalemate in the US is proof that Chinese autocracy works, while Western democracy does not. Hungary’s Prime Minister Viktor Orbán is openly defying the rules that Hungary agreed to when it joined the European Union. A major American right-wing group, the Conservative Political Action Committee (CPAC), was so delighted with Orbán’s ultranationalism that it held its spring 2022 meeting in Budapest to show its support.

In the US, the steady refusal of Trump Republicans to acknowledge the seriousness of the January 6 assault on the Capitol, their attempts to block any investigation into what actually happened, and their recent refusal to go along with proposed legislation to step up protections against domestic terrorism make the formerly Grand Old Party’s position perfectly clear: One man’s terrorist is another’s freedom fighter.

That Republicans continue to cling to Trump, despite the ex-president’s egregious behavior, might be perplexing to anyone not caught in Trump’s peculiar reality-distortion field. In truth, as suggested by the mixed record of Trump-endorsed candidates in recent Republican primaries, Trump Republicans love what they think Trump stands for more than the man. A major factor for the GOP’s political operatives may be simple survival.

The Republican Party has not won a majority of the popular vote since the election of George W. Bush in 2004. So the GOP’s challenge has been to retain power while representing a shrinking minority of America’s increasingly diverse population. In the 2016 election, three million more Americans voted for Hillary Clinton than for Trump. Trump’s victory in that presidential election depended entirely on the eccentricities of the Electoral College and the US Senate, both of which were carefully designed to guard against the largest states with the greatest population running roughshod over smaller, less populous states.

In the end, 78,000 votes in three states — Pennsylvania, Michigan, and Wisconsin — secured the Electoral College victory for Trump. In each of these states, Trump’s popular-vote margin over Clinton was less than 1 percent.

Trump’s 2016 chief strategist, Steve Bannon, realized that if they could mobilize 100,000 votes in a handful of swing states, they could then swing an election in which both sides were nearly evenly balanced. The groups that Bannon targeted were white supremacists, QAnon conspiracy freaks, evangelicals, and the anti-abortion, right-to-life fanatics. In short, anyone who felt that they were personally threatened by contemporary change.

It turns out that with the right algorithm, it’s easy to generate hate across social media, and Bannon, who had previously run Breitbart — an extreme right-wing website — knew just what buttons to press. The strategy worked, if only by a hair-thin margin. Having delivered the White House to Donald Trump in 2016, Bannon eventually dropped out of the Washington scene and began to push his right-wing philosophy in Europe.

Although Trump lost the 2020 presidential election, his admirers were able to hold on to nearly half the US Senate, which again gave Republicans — representing a minority of the population — the power to short-circuit any legislation that reflected the needs and values of the majority.

As with the Electoral College, it was the Constitution that tossed the GOP a legislative lifeline. Each state gets two senators, regardless of its population. As a result, Wyoming, with a population of less than 600,000, has the same clout in the US Senate as California, which has a population of nearly 40 million.

This system may have made sense when the United States had a primarily farm-based economy, but it has taken a decidedly anti-democratic turn now that the country has entered a post-Industrial Age, with a population increasingly concentrated in large cities and their suburbs.

Starting in the 1980s, Republicans also made a coordinated attempt to take control of state legislatures, where power was typically tilted toward rural and away from urban districts. By 2016, they controlled 32 state legislatures. With their hopes of presidential power slipping away, Republicans began banging the drums for “states rights,” even though it was unclear exactly what that meant.

Few Americans thought much about state governments — after all, we are a big country and most of us think of ourselves first and foremost as Americans. Yet controlling state legislatures gave Republicans control of the maps that define voting districts, and they soon turned gerrymandering into a potent art. Even the simple expedient of reducing the number of convenient polling places in districts where the majority of voters were likely to vote Democratic could swing elections to the right.

To say that this doesn’t look like democracy is an understatement. But having lost the majority of the population, and feeling doomed as ethnic diversity became more and more a demographic fact, Republicans began looking at democracy as a one-way ticket to political extinction.

The model adopted to put off their unseemly end is based on the stratagems that southern states fashioned to exclude suddenly freed African slaves after the Civil War from the political process: Make it hard, in some cases impossible, for your opponents to get to the polls.

Most Trump Republicans act as if the United States were originally all white, Christian, and heterosexual. It wasn’t. The original American population was composed of indigenous groups who were rapidly deprived of their land. Even if you skip over that detail, America’s colonial population was a grab bag of different European nationalities with different customs and religions.

Just as Hitler’s delusions concerning the so-called Aryan race had no grounding in reality, the current “white replacement theory,” which so caught the imagination of Payton Grendon and is subtly promoted by right-wing propagandists like Tucker Carlson and Fox News, has no basis in reality. In fact, most Americans trace their roots back to the waves of immigration that took place in the late 19th and early 20th centuries. If anyone should have a claim to longevity as Americans, it is the African Americans who were already here in the 18th and early 19th centuries, albeit involuntarily.

Of course, how long one’s family has been here is irrelevant. The Constitution automatically makes anyone born in the United States an American citizen. Whether you are from Bhutan, or Timbuktu, or Ecuador, or Ireland, or Eastern Europe, once you are an American citizen, that’s it. It doesn’t matter if you are white, Black, brown, or a mixture of all three. You have the same rights as any other American.

Confronting demographic realities, Republicans basically have two alternatives. The first is to open their ranks to the diversity that increasingly makes up the American public. The second option — the one that Republicans seem to be embracing — is to bring white Americans to the polling booth while discouraging everyone from voting who doesn’t fit their preferred profile.

Parallel battles over the future of democracy are shaping up elsewhere in the world, from the rise of France’s far right under Marine Le Pen to the Hindu-first India of Prime Minister Narendra Modi. Putin threw the international rule book out the window when he decided to obliterate neighboring Ukraine. Xi is equally dismissive of Western democracy.

To a large extent, American history has been an experiment in implementing many of the ideas of the European Enlightenment: guaranteeing the right of citizens to have a say in their future, freedom to act with safety as an individual, and protection under the rule of law. Autocracy, government by a powerful man or a small self-styled elite, will always look more decisive and at times more effective than the chaotic debate that characterizes democracy.

But when strong leaders like Putin go off a cliff, they are likely to take everyone else with them. At that point, it is hard to disassociate oneself from the wreckage.

Putin’s recent actions, as well as Xi’s, reveal the danger in ceding one’s autonomy to the proverbial man on a horse. Our founding fathers fought a revolution and wrote a constitution to make precisely this point for future generations.

Why all this matters now is that the midterm elections in November could very well decide which way we will go as a country. What kind of future do we want? It is easy to buy into the cliché that “one vote” doesn’t matter much, and that no matter what you do, everything will be the same. The problem is, it won’t. Discard democracy, or more likely, let it slip away while doing nothing, and you risk losing your freedom. And once that is gone, you cannot bring it back except with blood. Just ask anyone in Ukraine.