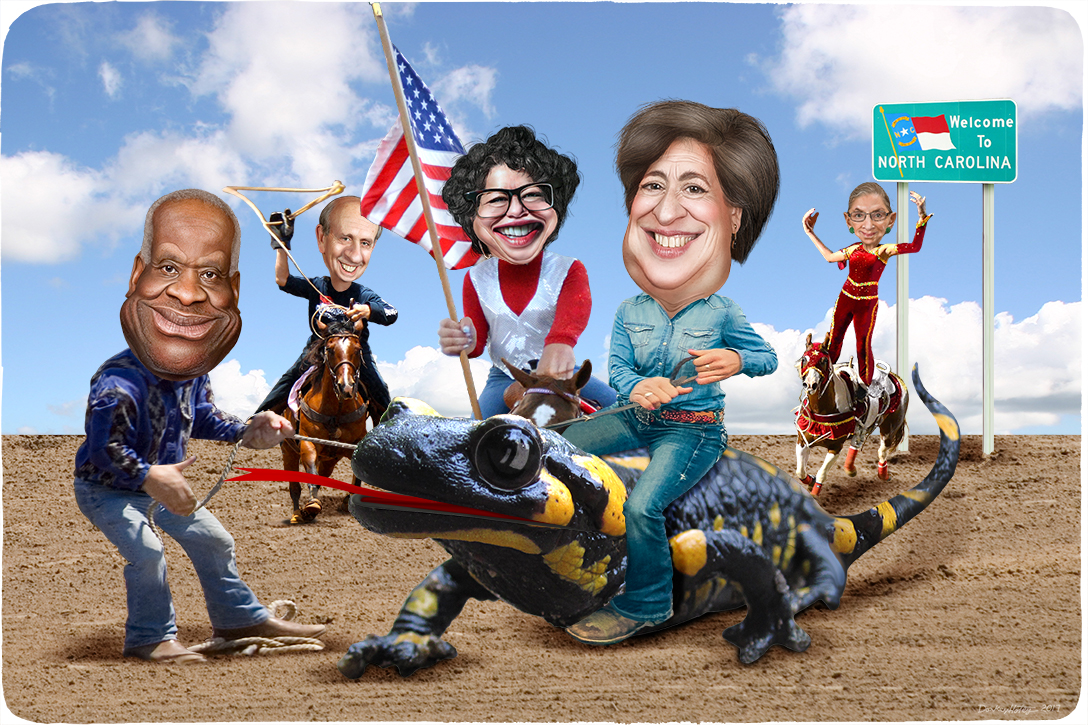 We generally use this space on Sundays to point out wrongdoing, abuses of power, or issues that we feel do not receive enough coverage. We generally try to do so with some degree of subtlety or humor. This isn’t one of those times: North Carolina Republicans are a bunch of undemocratic racists and they ought to be ashamed of themselves.

After a federal court had already slapped down their thinly disguised voter suppression law — saying it targeted African-Americans with “almost surgical precision” — the Supreme Court also delivered a rebuke to their racially motivated gerrymandering. Even conservative Associate Justice Clarence Thomas agreed with the decision and wrote his own concurring opinion.

Prior to writing their voter suppression law, for example, North Carolina Republicans commissioned studies to see how and when people vote, as well as what types of ID they had – broken down by race. They then used the information to tailor the law to do away with voting methods popular among blacks, while requiring the kinds of ID African-Americans were less likely to have.

While Donald Trump vowed to “Make America Great Again,” GOP state legislators did their best to turn the clock back to the time of Jim Crow laws.

In light of their many legislative schemes, it’s hard to believe that any of them ever read the Constitution — in particular the 14th and 15th Amendments — or are even vaguely familiar with the concept of democracy.

As a result, many of their laws have ultimately failed in court or are headed that way: For example, to preserve their supermajority, they rigged state districts along racial lines. That move was ultimately deemed unconstitutional.

When, in spite of their various efforts, Democrat Roy Cooper was elected governor, they didn’t accept the will of the voters. Instead, GOP state lawmakers quickly tried to curb the powers of the governor even before he took office – in particular those that would have given Democrats a majority in the State Board of Election. After the first attempt was defeated in court, they tried again last month and are again being sued.

While this shows that the system of checks and balances generally works in the most egregious cases, justice is not instantaneous.

Unfortunately, the system allows some racist laws or voting districts drawn along racial lines to stand until the courts have a final say. And in the interim, lawmakers like the bunch in North Carolina can do a lot of additional damage.

The people, however, can deliver swifter and sweeter justice by casting the ballots needed to kick out the very lawmakers who are trying to deny them the right to vote — in North Carolina and throughout the country. We strongly urge our readers to stay informed and vote out anti-democratic lawmakers whenever they get the chance.

The cartoon above was created by DonkeyHotey for WhoWhatWhy from these images: