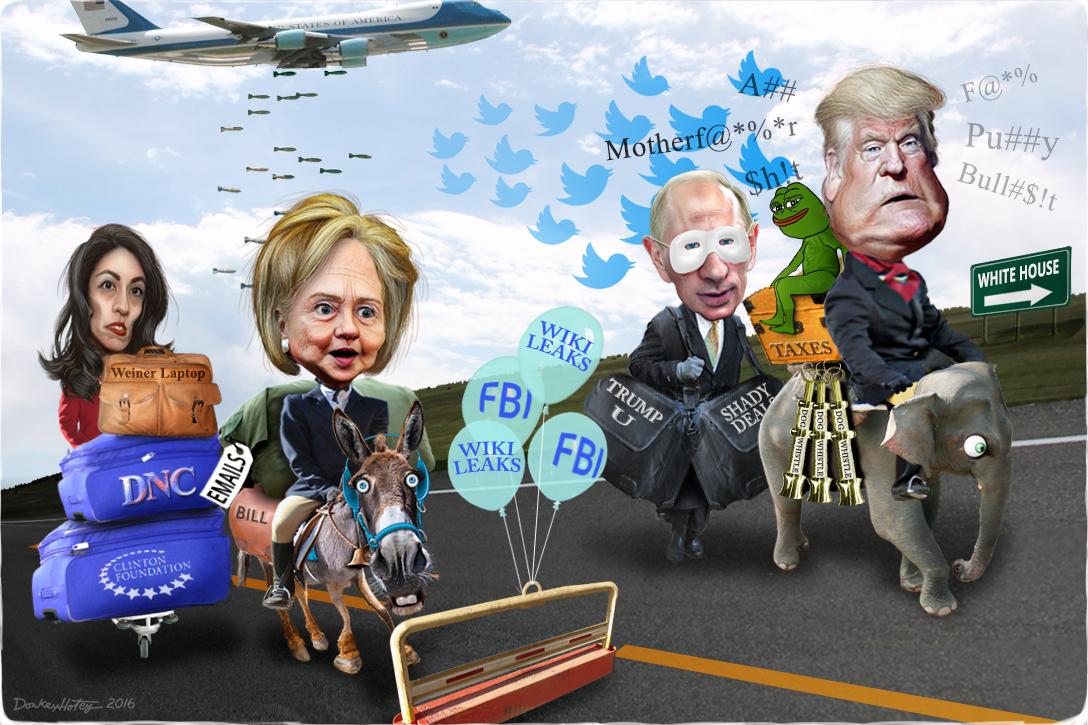 The only thing good about election day will be the end of the campaign. Photo credit: DonkeyHotey / WhoWhatWhy (CC BY-SA 2.0) See complete attribution below.
Cartoon Elections

The Neverending Race Is Coming to a Close. Then what?

Finally! That is the prevailing thought as this presidential election is headed for the finish line. Wanting this race to be over is certainly one of the reasons why a record number of Americans have voted early. But will it be?

Sure, we will (likely) know by Wednesday who the next president will be, but, in this election, that will not provide closure. The country is still deeply divided and neither candidate appears to be in a position to heal that rift.

If Hillary Clinton wins by a small margin, which is still the most likely scenario three days before the election, then Donald Trump has already suggested that he will claim the vote was rigged. If the Republican nominee manages to turn things around, possibly because the polls were as wrong as they were in UK’s Brexit referendum earlier this year, then Democrats will be the ones questioning the legitimacy of the results.

That will bring more divisiveness, more anger, and more distrust.

And there are reasons to distrust the system, although not necessarily the reasons Trump suggests. The system is rigged to benefit a very small number of people at the expense of a shrinking middle class. Yet the election is showing that the current model is unsustainable.

The primaries have already demonstrated  how frustrated and angry voters are with the establishment. In Trump and Bernie Sanders, we nearly got a matchup of two populist candidates — even though both of them were actually part of the establishment.

Americans are also fed up with the two-party system. And they should be. The United States is still a country of abundance — just not when it comes to the number of candidates who can represent them in government. It might be wishful thinking, but if the GOP breaks up into a Tea Party and a moderate wing, wouldn’t it be nice if a more progressive party were to split from the Democrats. All of a sudden there would at least be some choice and the parties would actually have to compete for voters other than those few independents in swing states.

The last year in particular has also highlighted that US institutions are failing. The GOP-led Congress is not even pretending to do its job anymore, and Republicans are already talking about impeaching Clinton and blocking any of her Supreme Court nominees if she wins. In other words, the obstruction will get worse.

The country is in trouble, no matter who wins, and neither of these candidates will change that. In fact, it is more likely that they will make things worse. One of the most surprising aspects of this election season is that there has not been more violence. We hope that this will still be the case on Wednesday and beyond.