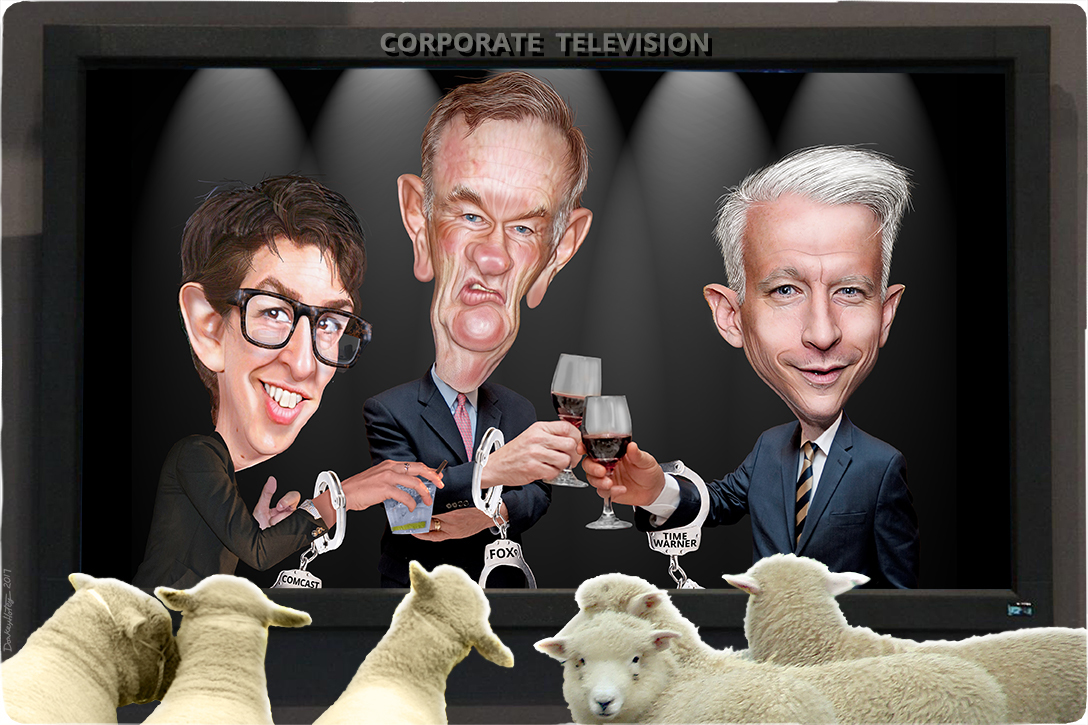 There is no doubt that MSNBC is the most honest of the three large cable news providers in the US. The reason is simple: As opposed to Fox News and the Cable News Network, it doesn’t have the word “news” in its name. That is, however, the only way MSNBC distinguishes itself among the trio.

Each has a bunch of well-paid anchors at its disposal as well as an army of reporters and correspondents. With all of these people on staff, they still did not manage to break any significant news this election cycle. Of course, you wouldn’t know this from the frequency of the “Breaking News” banners they keep flashing across our TV screens.

Corporate cable news is failing to live up to its role as part of the free press. We get lots of opinion but very little attention is paid to issues like military spending (or what the military is doing with the hundreds of billions it gets each year), mass surveillance, income inequality, climate change, election integrity, crony capitalism, mass incarceration, etc. The list of the issues that cable news is not adequately covering is endless.

Its negligence has directly contributed to the decline in political discourse and it has given those in power a sense that they are accountable only to the people who write their checks – and we are not talking about the taxpayers here.

While the print media has its own problems, print journalists are still getting it right some of the time and a lot of newspaper reporters broke actual news – which was then breathlessly regurgitated by Anderson Cooper and his merry band of cable anchors.

It seems as though the primary purpose of Fox, CNN and MSNBC these days has nothing to do with news. Instead, it seems all about keeping the nation’s pundits employed and filling in space between commercials.

CNN somehow managed to get nearly a dozen “experts” on its set at one time during the election. That might make for entertaining TV for people who enjoy pundits yelling at each other but the news value of these shows is practically zero.

In addition to providing less and less news, the channels have also stopped pretending to be unbiased. Their business model now is to reinforce the respective worldviews of their audiences. In that regard, Bill O’Reilly and Rachel Maddow are doing the exact same thing.

Sadly, most Americans are complicit when they are sending a check to their cable provider each month. Without even thinking about it, they help fund this travesty. But it doesn’t have to be that way.

Now, after another election cycle in which cable news let us down, it is time to cut the cord. Instead of spending money on cable, support the alternative media of your choice. Help fund the websites, podcasts, streaming services, investigative reporters, authors, filmmakers and artists that cover the topics you care about. This applies to everybody across the political spectrum. Somebody out there is talking about whatever it is that is important to you.

If you are worried about missing out on some of your entertainment choices, then you can subscribe a la carte to one of the many available streaming services. You’ll probably end up spending less money. Residents of most large US cities can access most broadcast stations in high definition over the air with an easy-to-use antenna.

To move the needle on the many topics that truly matter to people, we, the audience, have to change our behavior, because it is clear that the corporate cable news channels won’t change theirs. Cutting the cord and finding more effective ways to spend that money is a good first step.