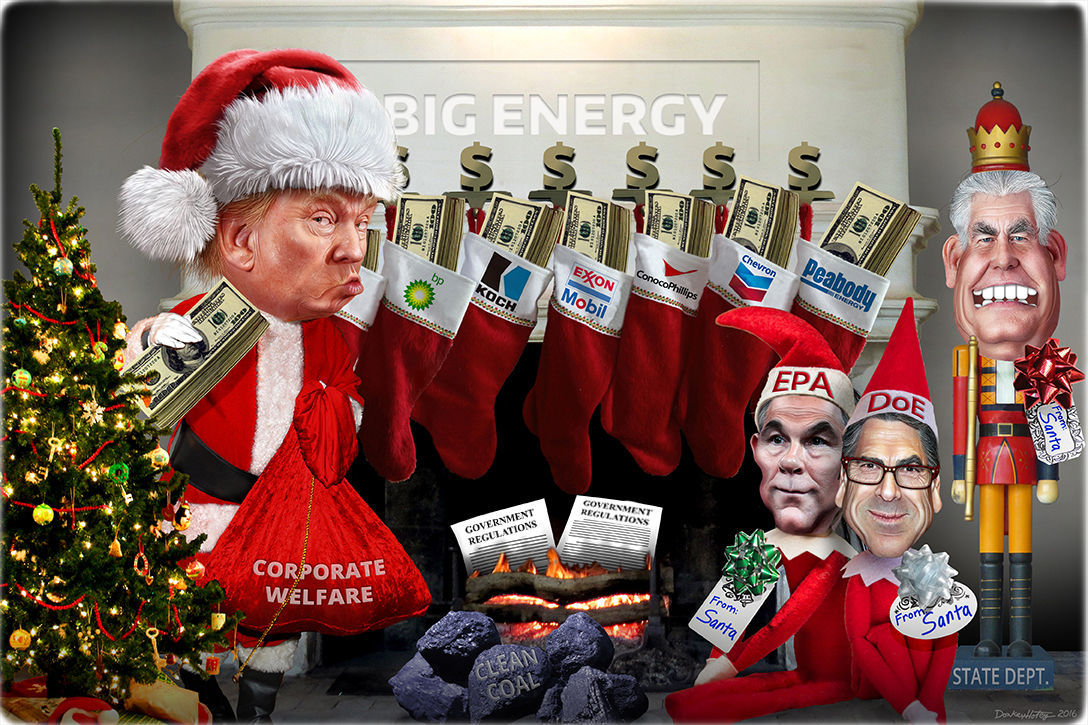 You Better Watch Out! Trump’s Cabinet is a Gift to Big Oil

This year, the US is getting coal in its stocking … and crude oil and natural gas produced by fracking. Lots of it.

The election of Donald Trump has already been a boon to various energy companies. On the day after he won, the stock of Peabody Energy, the largest US coal producer, shot up 50%. And the shares of ExxonMobil rose sharply when its CEO Rex Tillerson was tapped to be Trump’s Secretary of State.

The numbers speak a clear language: Investors believe that Trump will do wonders for fossil fuel producers – and the president-elect has given them no reason to think otherwise. In addition to choosing an oil executive to head the State department, Trump has picked fellow climate change denier Scott Pruitt to ru(i)n the Environmental Protection Agency. The Sierra Club said that particular choice is the same as “putting an arsonist in charge of fighting fires.”

What’s great news for the fossil fuel industry and anybody who wants to pollute the United States is not so great for people who believe that climate change is a problem. And there are a lot of them.

But to prove they are wrong, that climate change is not a problem, that the world is not warming up, Senator James Inhofe (R-OK) brought a snowball to Congress.

You can’t get any more scientific than that.

The Pew Research Center found last year that there is only one region in the world that believes — even less than the US — in the harmful effects of climate change: the Middle East.

What these figures also show is that the hundreds of millions of dollars Big Oil has spent on buying scientists and members of Congress was a really good investment. Those guys will say just about anything as long as they get a cut of the proceeds from that sweet crude oil their puppeteers are selling.

And that might be the biggest Christmas present of them all, because for the next four years they get the government they paid for – along with one of their own jet-setting around the world and torpedoing effective action to slow down climate change.

On the flip side, they better enjoy these gifts while they last because who knows how long there will be a North Pole for Santa to go home to.