Ever since the Great Recession of 2008, Wall Street’s name has been mud with the American public. One recent poll showed that 64 percent of those surveyed believe “the stock market is rigged against amateur investors in favor of large, professional investors.” No doubt the recent GameStop drama helped shape this view.

Other surveys have shown consistent support for stronger regulations on Wall Street and big banks, as well as for curbing their influence. Sen. Ted Cruz (R-TX) even crossed the aisle to join Rep. Alexandria Ocasio-Cortez (D-NY) in her criticism of online trading app Robinhood’s decision to impose trading limits to staunch the losses of large hedge funds hammered by recent wild market fluctuations.

In the past there were few choices available to those unhappy with the financial status quo. That may be about to change.

There are signs that the anger against the banks fueled by the 2008 crash, as well as dissatisfaction in how Wall Street invests the public’s money, has opened the door for another option: public banking. 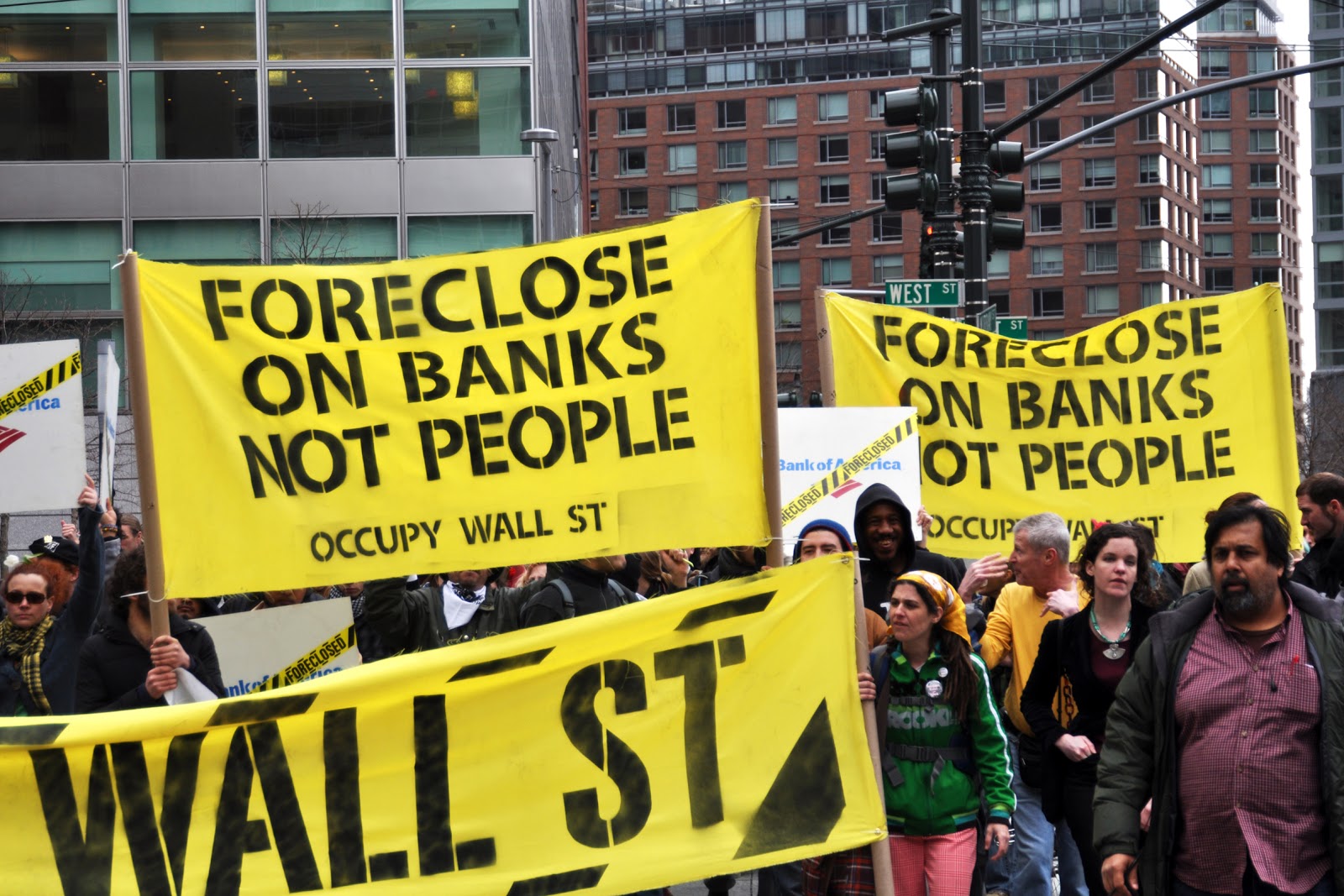 In the opinion of proponents, a public bank would free localities from predatory Wall Street institutions and save the taxpayer a lot of money. (Public bank advocates estimated that Los Angeles taxpayers would save $109 million a year in annual and transactional fees if they moved their money from commercial banks to a public bank.) That money could then be used to fund needed projects such as affordable housing, renewable energy, and small business expansion.

Here’s how the Public Banking Institute explains it:

Today, cities and states put their money in Wall Street banks, allowing those banks to leverage our public funds in order to dominate the financialized speculative economy rather than reinvesting them in our communities. At the same time, cities and states borrow money from Wall Street institutions and bondholders at high interest rates and pay large fees to keep money in their banks. This is not a cost-effective way to do business. Cities and states could be keeping their public dollars and leveraging them for their own community needs.

In 2019, Gov. Gavin Newsom (D-CA) signed a bill into law that allowed California cities and towns to establish public banks. For only the second time in 100 years, a people-powered coalition had overcome the stiff opposition of the banking lobby to successfully pass a law legalizing public banking.

More specifically the law will grant 10 public banking licenses to municipal governments once they have a business plan in place. One of the leading contenders for those licenses is San Francisco.

San Francisco is seen as one of the leading contenders to open a public bank under the new state law. Some see the ripples of the 2008 crash playing a big role in this.

“There certainly was an increase in the interest in activists nationally and elected officials looking at public banks as an option,” Dean Preston told WhoWhatWhy. Preston sits on the San Francisco Board of Supervisors and is a sponsor of legislation establishing a public bank for San Francisco.

Others see local issues driving the creation of a public bank.

“There are still a lot of pockets in San Francisco, especially in Black and brown communities, where local financial institutions are not serving the residents,” said Jackie Fielder, co-founder of the San Francisco Public Bank Coalition, a non-profit, public banking advocacy group.

Preston concurred, noting there has been a lot of activism towards divesting private bank money from controversial projects such as fossil fuel pipelines. He said that local activists have channeled that energy into the public bank movement.

“When you have a public bank, you don’t have to deliver the returns for investors and shareholders. It allows the bank to engage in a broader form of social investment,” said Preston.

Because the mission of big private banks is to generate returns for their shareholders, investing in projects like affordable housing — badly needed but not profitable — is not a priority. Preston said that since it is very difficult to finance these types of socially necessary projects through traditional banking, this is an opportunity for public banking — which does not need to maintain huge profit margins for investors — to take the lead.

According to both Fielder and Preston, the city of San Francisco currently has $13 billion invested in Wall Street banks. Estimates are that it will take three years for the proposed public bank to receive the proper governmental approvals, and five years to be up and running.

Once the public bank is active, the city’s funds would be transferred from the two private banks into the new public bank.

Opponents have said that a public bank poses serious risks because taxpayers would be left holding the bag should the bank fail, citing the examples of Fannie Mae and Freddie Mac. Public bank advocates point out that the public has already paid massive bailouts — to failing private banks.

Detractors cite numerous examples of public bank failures as far back as the 1800s. They claim that this was due in large part to loans going to well-connected political players, not underbanked city dwellers.

San Francisco and other California cities are not the only government bodies considering the establishment of a public bank. Four states — New York, Washington, New Mexico, and Oregon — have bills establishing state-owned, public banks pending in their legislatures. Philadelphia has similar legislation pending, and New York City has bills up for debate that would require the city to detail how much it’s paying for banking. Its sponsors consider it a precursor to creating a public bank. 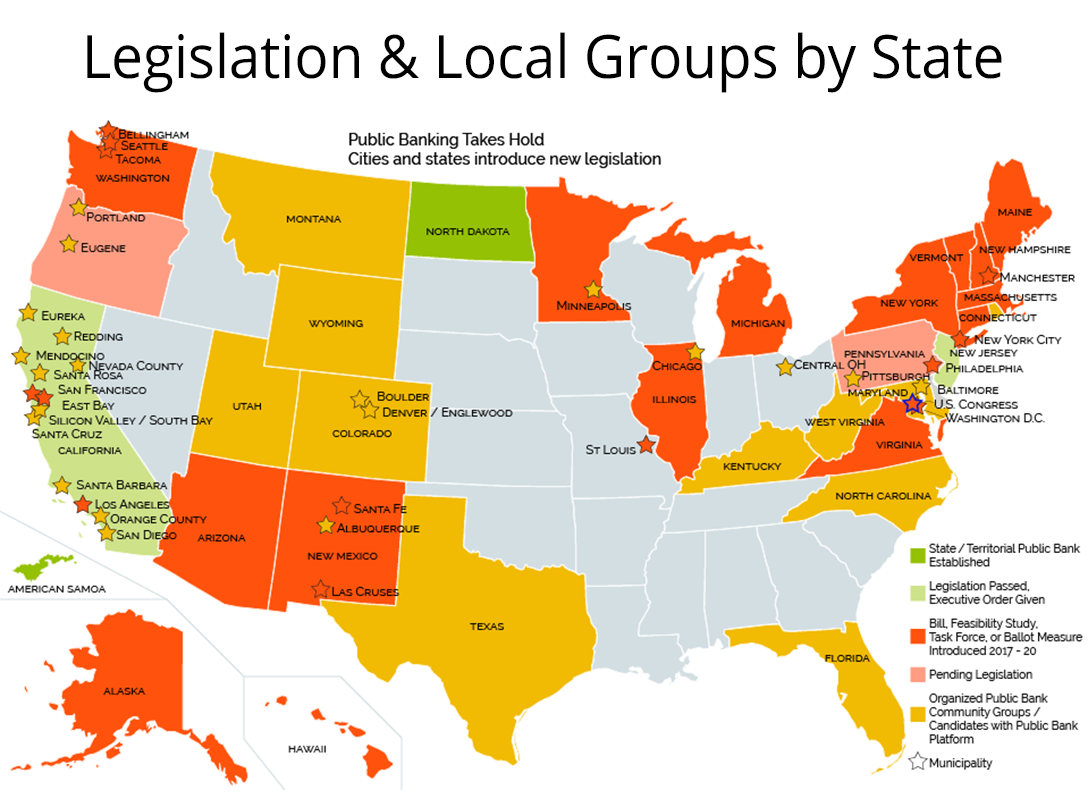 The wide range of public policy initiatives prioritized by supporters in these states and cities reinforces advocates’ claims that public banks would be responsive to the unique needs of their regions as opposed to a “one-size-fits-all” approach.

One prominent public supporter in New Mexico envisions the banks as a low-cost way to ensure small business and economic development projects have access to needed capital.

Philadelphia supporters believe a public bank could be a useful tool in fighting systemic racism by providing credit to minority communities and businesses often neglected by private banks.

One San Francisco supervisor asserted a public bank could help the city buy out and municipalize privately owned Pacific Gas & Electric and create more sustainable energy. This private utility has been seen by reformers as a poster child for corporate abuse.

While the priorities of public backers vary widely by region, there is a common belief that a continuing reliance on Wall Street and the private banks is a dead end.

“As long as we stay with Wall Street banks, our small businesses, our goals for climate change mitigation, our goals for providing more affordable housing are just not going to be met. And a public bank is the only way forward,” said Fielder.