President Joe Biden is in the midst of creating an administration that resembles the public. He’s on track to introduce “the single-most diverse Cabinet … that’s ever existed in the United States of America.”

In recent history, the executive branch has been noticeably older, white, and male-dominated. Only five active members of President Trump’s Cabinet were women, and three were people of color. Almost half of all appointees were between the ages 60 and 85. As of 2020, the American population is over 50 percent female, 42 percent visible minority, and 17 percent over the age of 65.

The Biden-Harris administration is projected to mirror the country’s increasingly diverse electorate, having appointed more women and visible minorities to Cabinet positions than ever before in history. Moreover, a quarter of appointees are under 45, and over half are under 60.

Though this could be considered progress, we must further determine how a resemblance between political leaders and the American public translates to representing different groups’ needs. In essence, does a diverse leader necessarily promote diverse interests?

Biden’s appointment of diverse individuals to valued Cabinet positions will promote groups’ substantive interests, according to Dr. Lindsay M. Chervinsky, presidential historian and author of The Cabinet. “Diversity doesn’t happen on its own, it has to be cultivated,” she said.

This diversity is personal and professional, with Biden placing candidates of diverse identities in Cabinet positions that, until now, were held by white men. Historically, when persons of minority race and gender identities hold political office, they occupy positions concerned with social causes, such as labor, housing, urban development, health, education, and welfare, as noted by Dr. Chervinsky. The enduring tendency to place women and members of other marginalized groups into ‘soft’ positions and disciplines exists within most institutions, including higher education, business, and government.

Biden has appointed numerous women to traditionally male-dominated roles: Avril Haines as the director of national intelligence, Janet Yellen as the secretary of the treasury, Susan Rice as head of the Domestic Policy Council, and Katherine Tai as the US trade representative.

Along racial lines, Biden’s Cabinet is set to achieve several other milestones. If confirmed, Deb Haaland will be the first Indigenous Cabinet member, Neera Tanden will be the first woman of color (South Asian American) as director of the Office of Management and Budget, and Alejandro Mayorkas will be both the first Latino and the first immigrant to head the Department of Homeland Security. Michael S. Regan, Cecilia Rouse, and Wally Adeyemo will be the first Black administrator of the Environmental Protection Agency, chair of the Council of Economic Advisors, and deputy secretary of the treasury, respectively. Pete Buttigieg will also be the first openly gay Cabinet member, encouraging an end to the political exclusion of the LGBTQ+ community.

As demonstrated, many of these milestones are intersectional, with individuals of underrepresented racial and gender identities occupying central Cabinet roles often reserved for white men.

But will this be enough to be truly representative of the country? According to Jane Mansbridge, a political scientist at Harvard University, descriptive representation is achieved when leaders are “in their own persons and lives in some sense typical of the larger class of persons they represent.”

There are two reasons why societies should strive for a political body that mirrors the public’s composition, according to Mansbridge: it challenges narratives about a historically marginalized groups’ ability or fitness to rule, and it adds and legitimizes group-specific issues and policies to the political agenda.

Political scientists at the University of Michigan and the University of California, Irvine, likewise maintain that the lived experiences accompanying identity allow demographic diversity to translate into policy diversity. Their analysis of Congressional leadership between 2003 and 2015 finds that “legislators are active advocates on behalf of protected classes with whom they have shared backgrounds.” To qualify as an “active advocate” in this study, Congress members had to introduce policies that benefited constituents with whom they had recently corresponded. Women, racial and ethnic minorities, and military veterans are all more likely to contact federal agencies on behalf of citizens who share their identities and experiences.

“When you get to a few gender topics — like reproductive rights — then we talk about women. But politics and policy are pretty much like medicine used to be and still is: the male body is the body.” — Kimberlé Crenshaw

These findings support the view that persons belonging to a group share unique experiences. Since identity facilitates exposure to this firsthand knowledge and context, diverse leaders are better able and more willing to share their diverse group’s perspective and introduce and support policy decisions that benefit their cause.

Lawyer, critical race scholar, and civil rights advocate Kimberlé Crenshaw coined the term “intersectionality” over thirty years ago. Intersectionality moves beyond studying racial and gender inequality as separate phenomena by acknowledging that “various forms of inequality often operate together and exacerbate each other,” Crenshaw said.

Identity-based inequalities explain why certain kinds of people rarely occupy positions of power, and face additional obstacles to get there. Women of color, located at two intersections of oppression, are continuously underrepresented in American politics. Though roughly twenty percent of the population, women make up four percent of the US Senate and 10 percent of the House of Representatives. Crenshaw and others favor increasing diversity among political personnel, through affirmative action programs like electoral quotas and party appointments.

“When you get to a few gender topics — like reproductive rights — then we talk about women. But politics and policy are pretty much like medicine used to be and still is: the male body is the body,” she said.

Diversity in the upbringing, backgrounds, and credentials of Biden appointees could allow them to better foresee and understand everyday Americans’ struggles and implement policies to address their various needs.

In some instances, however, one’s identity does not guarantee a commitment to their group’s substantive interests. Newly appointed US Supreme Court Justice Amy Coney Barrett possesses views argued to fundamentally oppose women’s autonomy. A distinction can be drawn between Justices Coney Barrett and Ruth Bader Ginsberg, who dedicated much of her life to studying and advancing gender equality. Thus, despite being two of the few women to sit on America’s highest court, these justices are on opposite sides of the spectrum regarding their dedication to protecting other American women’s rights and freedoms.

Descriptive representation also struggles to overcome the issue of essentialism. Insisting on a diverse “face” can communicate that different identity groups cannot listen to and represent one another, Mansbridge wrote in 1999. This inadvertently undermines the argument for encouraging political newcomers of mixed backgrounds and diminishes leaders’ ongoing efforts to address and balance their many constituents’ lived experiences and disparate needs, according to Mansbridge.

Appointing a leader from within a group to remedy that group’s weak political voice also risks treating them as a monolith. By assuming that the outward manifestation of a person’s identity qualifies them to represent their group, people overlook the existence and interplay of race, class, gender, and age identities, and their contribution to in-group divisions, Mansbridge wrote.

For example, while women are increasingly occupying political and corporate leadership positions, these gains have primarily been enjoyed by young, white, childless, and educated women. Given their affluent backgrounds, these female leaders are unfamiliar with the obstacles faced by many other women, such as racialized poverty and single-parenthood. 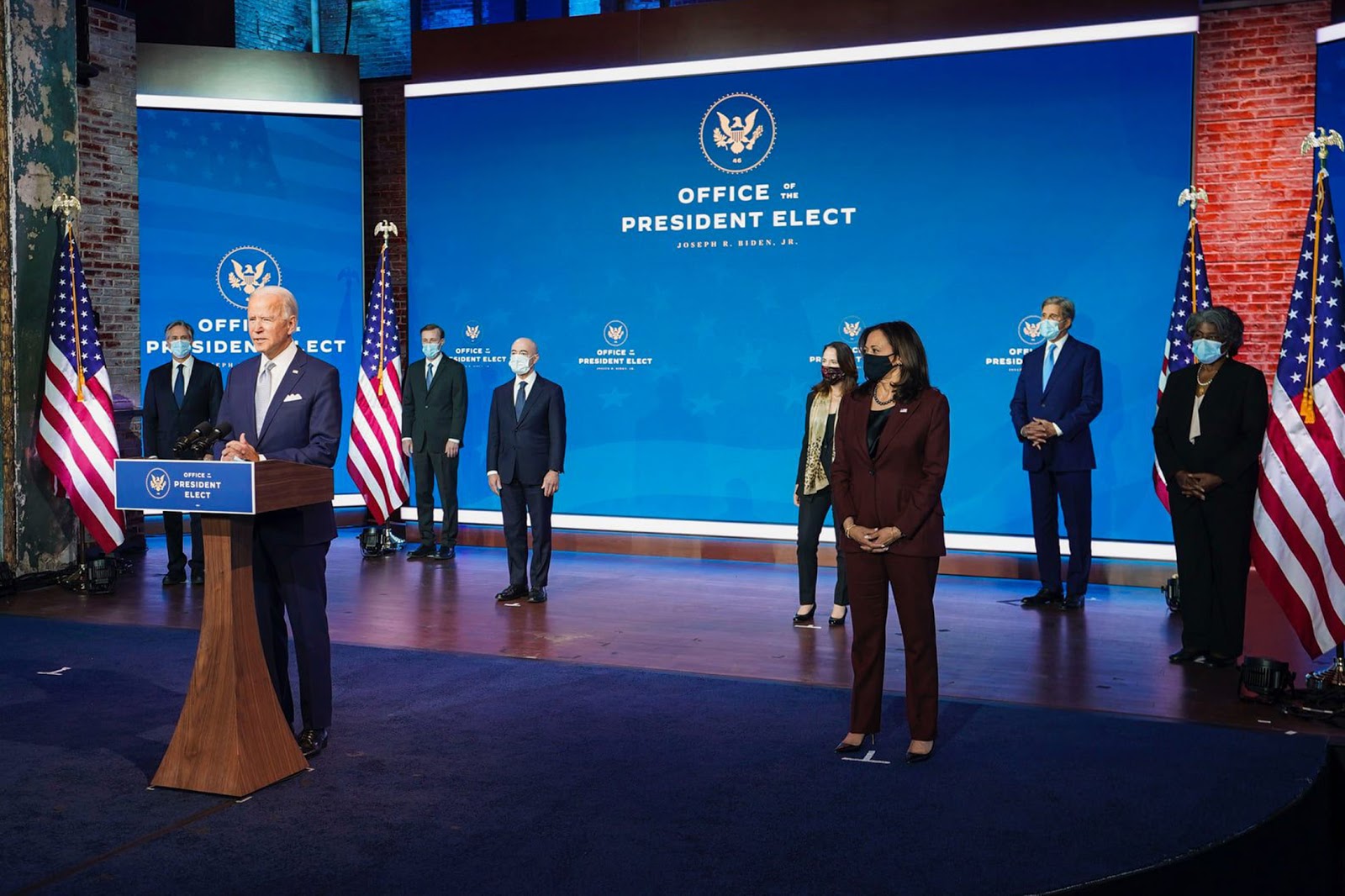 Although all of these women experience gendered limitations, sociodemographic differences ultimately shape their lives. An advantaged female leader’s distance from her female constituents’ realities hinders her ability to adequately recognize, acknowledge, and voice their concerns, undermining her efficacy as an elected official.

According to Corin Ramos, director of research at Catalyst, a global nonprofit dedicated to women’s workplace inclusion, political representation only becomes authentic and efficient when it is intersectional. Leaders must understand how particular identities and experiences interact to create unique forms of privilege and discrimination, and they must deconstruct systems contributing to oppression, she said. Such recognition not only enables leaders to represent their identity group’s interests but the interests of their constituents broadly speaking.

Biden was the first senator to introduce the Violence Against Women Act and has since led efforts to renew and strengthen the legislation.

As president, Biden intends to expand protections for survivors experiencing poverty, reliant on subsidized or affordable housing, and belonging to the LGBTQ+ community. Though not himself a member of any of these groups, Biden’s commitment highlights his awareness of how women’s various identity backgrounds condition their encounters with gendered violence and their access to resources and support.

A diverse representative might realize the interests of their in-group more efficiently and with greater contextual accuracy. However, as long as a leader is open-minded, objective, and responsive, they can grant a political voice and protection to groups to which they do not belong through inclusive policies.

Most of the president’s Cabinet appointees satisfy these criteria. Biden is seeking representation for women, people of color, and women of color in roles concerned with “hard politics” for which they have historically seen exclusion. Where he has entrusted white men, their backgrounds suggest specialization in their respected fields as well as open-mindedness and commitment to recognizing and advancing the diverse interests of all Americans.

Thus, the diversity of Biden’s Cabinet is not only symbolic but will enable those whose points of view have long gone overlooked or explicitly ignored to begin addressing the challenges facing America’s diverse electorate.

Perhaps most importantly, Biden’s Cabinet appointments will have strong residual effects, such as normalizing the presence of diverse backgrounds and voices, enhancing democratic deliberation, and creating and encouraging underrepresented group’s future political opportunities and involvement.

“I think that all these people in all these positions for the first time are making it possible for people to visualize themselves and conceptualize a career that perhaps they hadn’t before. Once they’re actually in office, my guess is that they will continue to bring up people behind them and they will work with others that are diverse and continue to cultivate that sort of orbit because they probably have a diverse cohort of colleagues and people they speak to,” Chervinsky said.

By appointing a Cabinet that reflects the country’s composition, Biden is beginning to shift the narrative away from “well, he’s just trying to check off all these boxes” to “he’s just selecting people whom he thinks are going to be really good leaders,” she said.