The Court’s 4-4 ruling on Monday means that the Pennsylvania State Supreme Court’s decision to consider valid absentee ballots received up to three days after November 3 as long as they are not clearly postmarked after Election Day, stands — for now.

Tom Spencer, vice president of the Lawyers’ Democracy Fund, predicted during a call with reporters Tuesday that Pennsylvania has “all the signs and symptoms” of becoming the new Bush v. Gore.

“The big gorilla in the room is the impact of the likely sitting [of] Judge Amy Coney Barrett,” Spencer said. “The Republicans are going to file, when she’s seated, another application because they want to make sure that the decision by the court is overturned.”

Spencer, who argued before the Supreme Court during the Bush case, also acknowledged that the outcome of the case in Pennsylvania might have been clearer had it been heard by nine Justices. Paul M. Smith, vice president for litigation and strategy with the Campaign Legal Center, said that the deadlocked decision may be reviewed again after the election.

“It’s certainly possible that Justice Barrett could come along between now and the election … and vote along with the four [Justices] that were willing to stay it now and change the outcome,” Smith said. 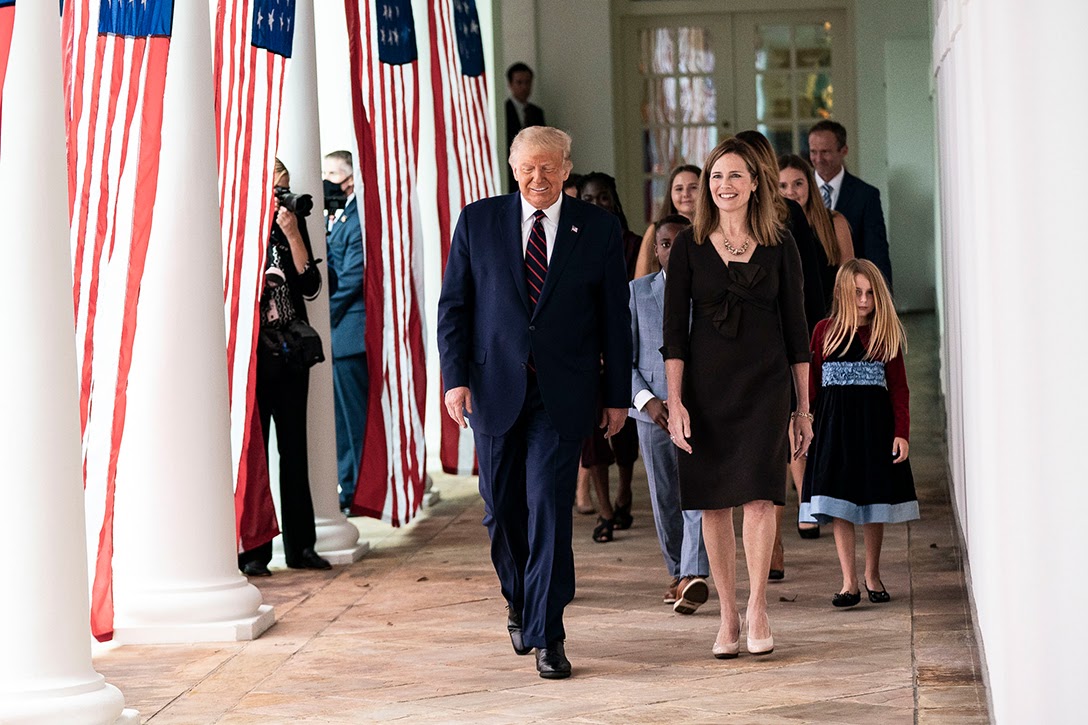 President Donald Trump walks with Judge Amy Coney Barrett, his nominee for associate justice of the Supreme Court of the United States, along the West Wing Colonnade on September 26, 2020, following announcement ceremonies in the Rose Garden. Photo credit: The White House / Flickr

It is not certain how Barrett would vote on election-related cases if confirmed. She repeatedly refused to answer questions during her confirmation hearing about voting and the 2020 election. However, most election attorneys agree that — if she were to be confirmed — having a full bench would provide clarity on this issue.

The Supreme Court will hear a similar case in Wisconsin in which Democrats have asked the Court to reverse a lower court ruling that blocked an extension that would have allowed the state to accept absentee ballots received up to six days after November 3 so long as they were postmarked by Election Day. Neither Pennsylvania nor Wisconsin allow absentee ballots to be counted until Election Day.

Several states are also awaiting decisions regarding absentee ballot drop boxes, which Spencer warned is a “tremendous problem.” In Ohio and Texas, federal courts sided with state officials to have just one location per county, ostensibly to protect election security.

According to Spencer, these security concerns are valid. “Drop boxes, in certain zip codes, could be looked at from a political point of view and looked at as a target,” he said. “I know we have a national delusion that vote fraud is very, very rare … but I can tell you from my personal experience that there is an underworld of ballot brokers who exchange ballots for cash.”

Absentee ballot drop boxes in California have been a particular point of contention in recent weeks. Democratic Attorney General Xavier Becerra issued a cease and desist letter to the California Republican Party after it admitted to placing unofficial drop boxes throughout the state, and investigators announced Monday that an official drop box was intentionally set on fire.

Gineen Bresso, former White House counsel during the Trump administration and former Bush-appointed chair of the US Election Assistance Commission, said that the ruling in Pennsylvania is troubling because it was a deadlocked decision and there is no resolution on this issue.

“When you have a deadlock like this, if there is any post-election litigation, there could be an issue in resolving any election contest that’s brought before the Supreme Court,” Bresso said.

Lisa Dixon, executive director of Lawyers Democracy Fund and counsel for the Republican National Lawyers Association, said that there is still a lot of uncertainty regarding absentee ballot processing.

“It’s important for voters to have confidence in the process, whether they choose to vote by mail or in person,” Dixon said.

Another issue that could be brought before the Supreme Court concerns poll watchers. The Trump campaign unsuccessfully sued in Pennsylvania to let poll watchers observe polling places in counties in which they themselves are not registered to vote. Bresso warned that election observation and transparency is “under attack.” Bresso accused Democratic attorneys general and senators of equating conservative poll watchers with armed militias.

Spencer said that poll watchers have raised concerns about security this election cycle.

“One of the first concerns of prospective poll watchers [is that they] tend to be older people,” Spencer said. “They’re not NFL linebackers going to sit in precincts.”

Bresso argued that nothing compares to the record number of litigations this election cycle, and the uncertainty caused by the number of undecided cases has confused voters and undermined faith in the voting process.

“There is no reason to believe that it will stop on Election Day,” Bresso said.