The Voting Machine Monopoly — Is This Any Way to Vote? - WhoWhatWhy
Reading Time: 4 minutes

A tiny group of companies has become dominant in the field of voting equipment, in part because they are deeply engaged in setting up the rules that govern who can enter the marketplace.

For a system directly used by so many people — nearly 137 million Americans voted in 2016  and more than 122 million voted in 2018 — it might be surprising that there are not more players in the election equipment business.

The players we do have? The Big Three: Election Systems & Software (ES&S), Dominion Voting Systems, and Hart Intercivic.

By far the dominant supplier of voting equipment in the United States is ES&S. ProPublica reported in 2019 that ES&S controlled around 50 percent of the market. In the past several years, ES&S has established its presence in places including Pennsylvania, South Carolina, North Carolina, Delaware, and Wyoming.

Dominion Voting Systems claims to have been around for more than a century. It counts many counties in New York state among its clients, as well as having a presence in Illinois, Nevada, Louisiana, and, outside of the US, in Canada, Mongolia, and the Philippines.

In 2019, the company found itself the target of activists’ concerns after the state of Georgia contracted to use its Dominion ImageCast X Voting System, which WhoWhatWhy has reported as “a type of ballot-marking device [that] allows voters to mark a ballot on paper or electronically, but produces a summary count of votes on a QR code rather than a human-readable paper list.” Unlike conventional paper lists, the QR codes can’t be read by poll workers and can only be tallied by Dominion’s machines. 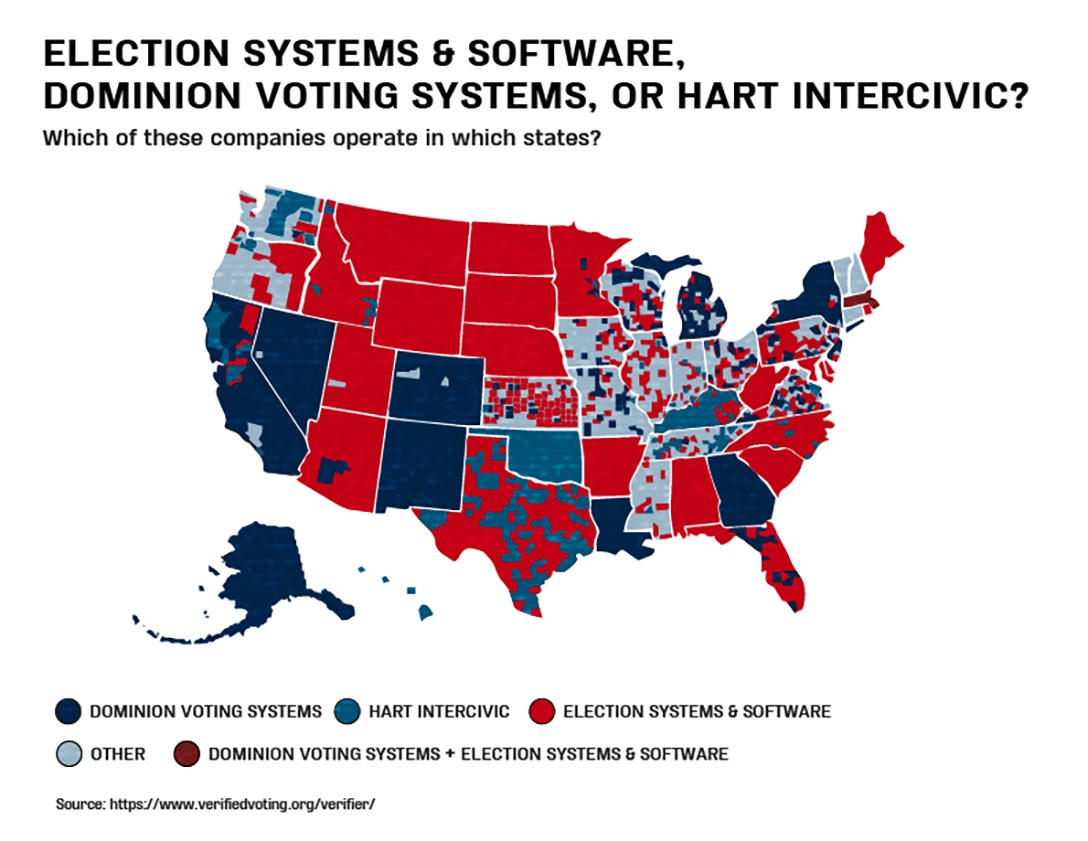 During the 2018 midterms a number of “straight-ticket” voters complained that Hart’s eSlate system had switched their choices to the opposite party. The complaints to the Texas secretary of state’s office recalled similar complaints that had cropped up in Texas a decade earlier.

So, how did The Big Three achieve this near-monopoly?

It’s been feast or famine for the companies that produce the machines, says Tammy Patrick, the senior adviser to the Democracy Fund, a bipartisan foundation that promotes advances in election administration.

Building a relatively impregnable, affordable, easy-to-use voting machine is difficult, and the companies who have already cornered that market are not anxious to share the wealth.

Before the 2000 elections, most vendors sold equipment on a rolling basis as districts replaced aging machines.

“One year they were in Nebraska,” said Patrick, “the next year, it might be Minnesota.”

In the wake of the controversy surrounding the 2000 presidential elections, however, Congress passed the Help America Vote Act (HAVA), which created new election standards to help prevent meltdowns similar to the one that plagued Florida. With the changed requirements, election commissions across the United States were suddenly forced to buy new voting equipment at roughly the same time. That resulted in a temporary sales bonanza. Once the sudden demand had been met, however, sales numbers dropped and remained stagnant for nearly a decade.

“That’s a huge shift in a market,” Patrick said. Smaller vendors either dropped out of the market completely or were taken over by the bigger players.

The market for new voting machines is relatively small — about $300 million.

“It’s highly regulated, and there aren’t very many opportunities to sell new equipment. So for new companies, it’s really not a great business to get into,” said Ben Adida, executive director of Voting Works, a nonpartisan nonprofit that makes machines and software to conduct and audit elections.

During the last proposed rulemaking process, “The largest spenders came in with their lobbyists,” said Gregory Miller, CEO and co-founder of the Open Source Election Technology Institute (OSET), “and they essentially helped craft the regulations that are known today as the HAVA regulations.” It was obvious, at least to Miller, that the lobbyists would make certain that the new rules served their company interests.

“They create[d] barriers to entry,” Miller said. Mostly, this was accomplished by creating high switching costs, which meant each player was almost guaranteed to keep its customer base, according to Miller.

“A perfect example of a ‘barrier to entry,’” Miller said, “is to institute a federal certification program.” That alone can become “incredibly costly,” he said. Developers need enormous amounts of cash if they want to even begin to break into the marketplace.

Miller also said that if a state government wants to switch systems, they’re “going to have to figure out how to take all of that data and either reverse engineer it or rewrite it.”

Bottom line: Building a relatively impregnable, affordable, easy-to-use voting machine is difficult, and the companies who have already cornered that market are not anxious to share the wealth.

Excerpted from Is This Any Way to Vote?: Vulnerable Voting Machines and the Mysterious Industry Behind Them by Celeste Katz Marston and Gabriella Novello. Available on Amazon and at WhoWhatWhy, starting Sept. 29. Find out everything you need to know about voting machines, from how they work, to who owns them, to how easily they can be hacked.

One response to “The Voting Machine Monopoly — Is This Any Way to Vote?”