The moment that college student Kecheng Du saw a tweet from President Trump saying only “China!,” he feared that his plans for advanced studies in the US might go up in smoke.

For several years, the US has been making it harder for graduate students from China to study STEM — science, technology, engineering, and mathematics. In May, when Kecheng noticed Trump’s “China” tweet, the president signed a proclamation barring Chinese graduate students and researchers with ties to the People’s Liberation Army (PLA) from entering the United States. It was Trump’s latest attempt to stop China from using graduate students to steal intellectual property and technology. The executive order gives the US secretary of state discretion to determine which students are banned.

On July 6, the Department of Homeland Security also ordered international students to leave the US if their universities switch to online-only courses.The policy was reversed a week later after an outcry and legal challenges.

Kecheng, who asked that his real name and university not be identified to prevent difficulties with the Chinese government and his current school, is a third-year undergraduate at a research university in China, one of the military-affiliated schools potentially targeted by the US.

Kecheng said he’s been called a “Red engineer” —  a scientist working for China’s national research program. But that doesn’t dampen his enthusiasm for studying at a top research university in the US. He wants to study computer science in the US, especially programs relevant to computer vision and deep learning. “I saw many papers from respected researchers in the US,” he told WhoWhatWhy. “I am envious of them.”

Kecheng said he was amazed, for example, by “CS231n: Convolutional Neural Networks for Visual Recognition,” an online course on computer vision offered by Stanford University. “The quality of the course is much better than in a Chinese university,” he said.

Nearly 370,000 Chinese students enrolled in US universities during the 2018-19 academic year. That provided tremendous revenue for American research institutes. Chinese students represent about one-third of the international student body in the US, which contributes more than $45 billion to the US economy.

But Kecheng and other would-be students from China are reconsidering their options. “Continuing my study in the US is like a gamble now, and I can’t afford the price if I lose,” he said.

In 2018, the US State Department shortened visas to one year for Chinese graduates studying fields such as robotics, aviation, and high-tech manufacturing. In the first quarter of 2019, the US government rejected 13.5 percent of students seeking to study in the US on scholarships funded by the Chinese government, compared with 3.2 percent in 2018.

In his second year of college, Kecheng and 31 classmates wanted to attend a one-semester exchange program at the University of Illinois Urbana-Champaign in 2019. He waited in line in front of the US embassy for two hours, but his application was rejected after a quick interview. He recalled that only two or three of his classmates received a visa. 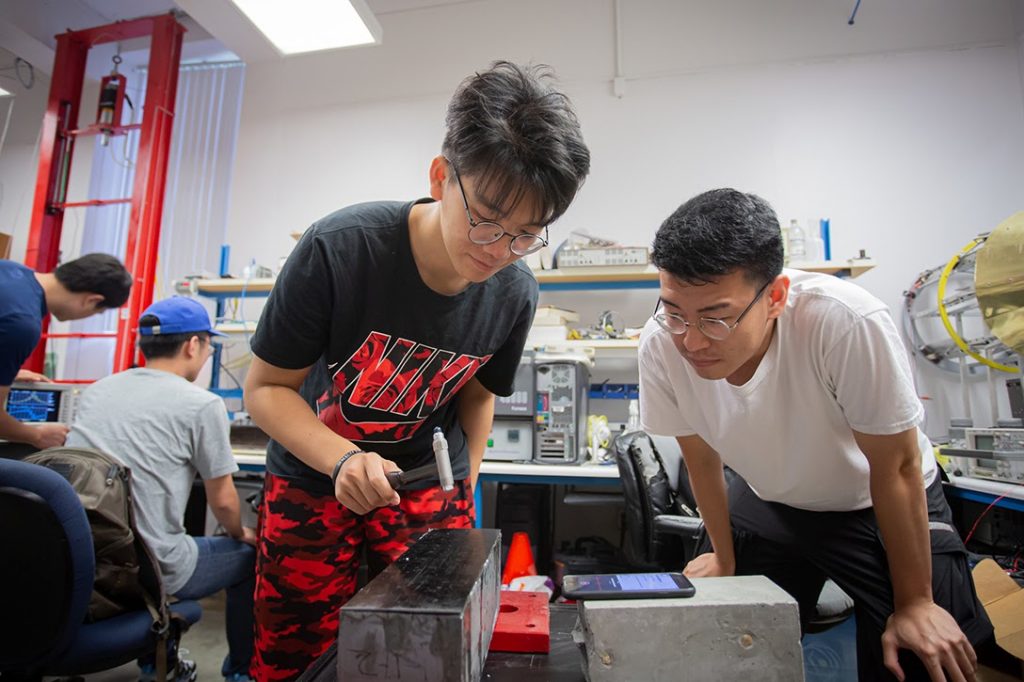 Students from the South China University of Technology participate in a summer workshop at the University of Houston Department of Civil and Environmental Engineering to research construction methods for resilient civil infrastructures and structural design on Aug. 6, 2019. Photo credit: Cullen College / Flickr (CC BY-NC 2.0)

Now, Kecheng has decided to apply for postgraduate programs at Chinese universities. He is preparing for the Graduate Entrance Examination, which is held in December every year.

For Chinese graduate students already studying in the US, the policy changes are nerve-wracking.

Kecheng knew a senior student who had received an offer from a US university but was told by his professor that he should be “mentally prepared” to be rejected by the US government.

“I knew many people whose plans were disrupted. Some universities in [Hong Kong] and Singapore have forwarded emails to them, encouraging them to apply for their PhD programs [instead],” he said.

If Kecheng had been able to continue studying computer vision in the US, he said, that would have helped him gain more practical experience, communicate better with mentors, and get a good job in the US afterward. The average salary of a computer vision engineer in the US is around $145,000, compared with $28,000 to $35,000 in China.

For Chinese graduate students already studying in the US, the policy changes are nerve-wracking. Zai He (also a pseudonym) is a Chinese student about to start his third year of PhD studies in computer science at the University of Texas-Austin. He received his bachelor’s degree from Tsinghua University, which is well-funded by the Chinese government for scientific research. He said US policymakers made him feel uncertain about the future.

Before Trump’s proclamation to ban some Chinese students, Sen. Tom Cotton (R-AR) and Sen. Marsha Blackburn (R-TN) proposed a bill to ban all Chinese nationals from receiving US visas for graduate and postgraduate study of STEM fields.” The Chinese Communist Party has long used American universities to conduct espionage on the United States,” Cotton said. “The SECURE CAMPUS Act will protect our national security and maintain the integrity of the American research enterprise.”

Zai holds a five-year visa for his PhD studies in the US, but said he was intimidated by the bill. He dares not leave the US even for a family visit due to fears that he will be denied re-entry. Also, he passes up academic conferences held outside the US, which could affect his career prospects.

“If you want to build your influence in academics, you have to network people,” Zai told WhoWhatWhy. “I could have a Zoom presentation, but it is different if I could physically attend the conference and interact with the scholars I respect.”

Zai even considered dropping his PhD studies and switching to a master’s degree program. “That would mean I have to take some courses to [gain] credits rather than concentrate on my research,” he said. “If I am expelled, I don’t want to be empty-handed when I come back to China.”

Zai planned to find a job in the US after graduation, but he now has second thoughts. “Either being on a faculty at the university or a research scientist at the corporate [level], I am not sure if the country welcomes me,” he said. “I would probably have to worry every day if I would be expelled at my workplace.”

American universities and academics have denounced the Senate proposal to ban Chinese STEM students. ”This legislation, if passed, would erode the collaborative nature of scientific research that yields new discoveries and medicines at a time when we need them the most,” the American Society for Biochemistry and Molecular Biology said in a statement.

Meanwhile, China’s top 36 universities have joined a national program preparing talented STEM students to pursue PhD studies and work in research labs funded by the government. They will recruit 6,000 students who excel in science subjects this year.

Critics say the US crackdown on Chinese students is shortsighted, and could backfire. “Intellectual property theft is a real concern, and China has been the world’s foremost infringer,” concluded an article in Foreign Policy. “But a blanket exclusion of Chinese students from U.S. academic and scientific research is not a reasonable response — and risks harming America’s critical comparative advantage: the strength and vitality of its research enterprise and innovation ecosystem.”