This article is part of a series on economic inequality.

In the mid-20th century, the US became a stunningly more economically equal place. In just a few decades, the nation went from a place where the top 1 percent were grabbing nearly a quarter of national income, to a society where those rich pulled down less than a tenth.

America became, in effect, a mass middle class nation, the first in world history. Never before had the majority of a major nation’s population had cash remaining in their pockets — “disposable income” — after paying off daily necessities.

Today, that more equal US seems almost a mirage. By every measure, the nation’s distribution of income and wealth has become substantially less equal. Plutocrats once again dominate our economy and democracy, and average Americans face relentless economic insecurity.

What explains this about-face from prosperity to precarity, from relatively modest fortunes to a re-energized rich? Egalitarian-minded analysts have been working through that question, and one answer seems obvious: America became much more unequal when America stopped taxing the rich at significant rates.

The US most certainly did tax the rich significantly at mid-century. In 1944, the federal tax rate on income over $200,000, the equivalent of $3 million today, zoomed to 94 percent. That top rate hovered around 90 percent for the next two decades. Grand private fortunes faced stiff taxes as well. Federal taxes on the estates the rich left to their heirs reached as high as 77 percent.

But these high tax rates on the rich started sliding in the 1960s. In the 1980s, that slide became a free fall, with the top income-tax rate dropping all the way to 28 percent. The current top level: just 37 percent. The tax on profits at companies run by the rich has shrunk too, from more than 50 to just 21 percent, and few corporations pay even that.

So do we simply need to reverse this tax rate skid to make the US more equal again? A number of egalitarian-minded political leaders are moving in that direction. Some are even proposing new tax-the-rich approaches, most notably an annual “wealth tax” on the assets of the super rich. 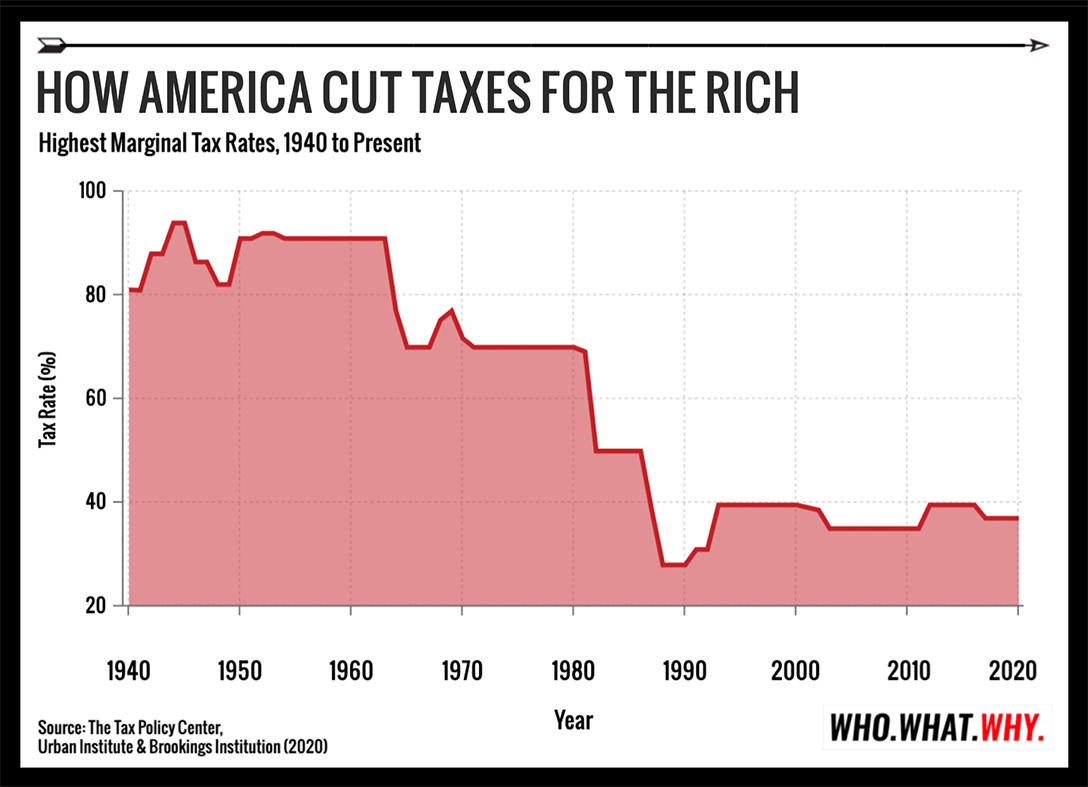 But other egalitarians, while welcoming these proposals, see this new tax-the-rich push as an inadequate twist on the traditional “redistributive” approach to curbing inequality. Let’s tax our wealthiest, this traditional approach urges, and use the revenues to underwrite initiatives that can help “level up” those without much wealth at all.

Redistribution has, to be sure, made invaluable contributions. Without high taxes on the wealthy, the mid-20th century would have experienced no egalitarian surge. But this surge faded. The rich came back. What made their comeback possible? Redistribution as traditionally practiced had a fatal flaw. Redistributionists essentially accepted, as a given, that a modern economy will end up advantaging some at the expense of others. They saw their role as working — via the tax code — to even up the outcomes.

But advantaged people in unequal societies seldom cooperate with efforts to even things out. They push back. Eventually, they break through and win lower tax rates. Extreme inequality returns.

The British economist Faiza Shaheen uses a medical analogy to describe how the traditional redistributive approach typically falters. Over time, she explains, viruses can develop resistance to antiviral medications. The rich, like viruses, also develop resistance — to redistributive taxes. They use their wealth and power to carve out tax loopholes and lower tax rates. Their fortunes balloon.

The alternative to focusing so heavily on redistribution? We could battle for economies that generate less inequality, instead of working for redistributive measures that aim to clean up the messes inequality creates. We could place, in effect, as much emphasis on the “predistribution” of wealth as its redistribution. We could identify the economic institutions and policies that guide excessive rewards to the rich and powerful — and make them over.

We could start by focusing on the decades-long decline in the share of national income going to worker wages. This shrinking worker share makes perfect sense — for top corporate executives. The smaller the worker share in the economy, the more generous the executive share. The more executives exploit their workers, the more they can pocket. 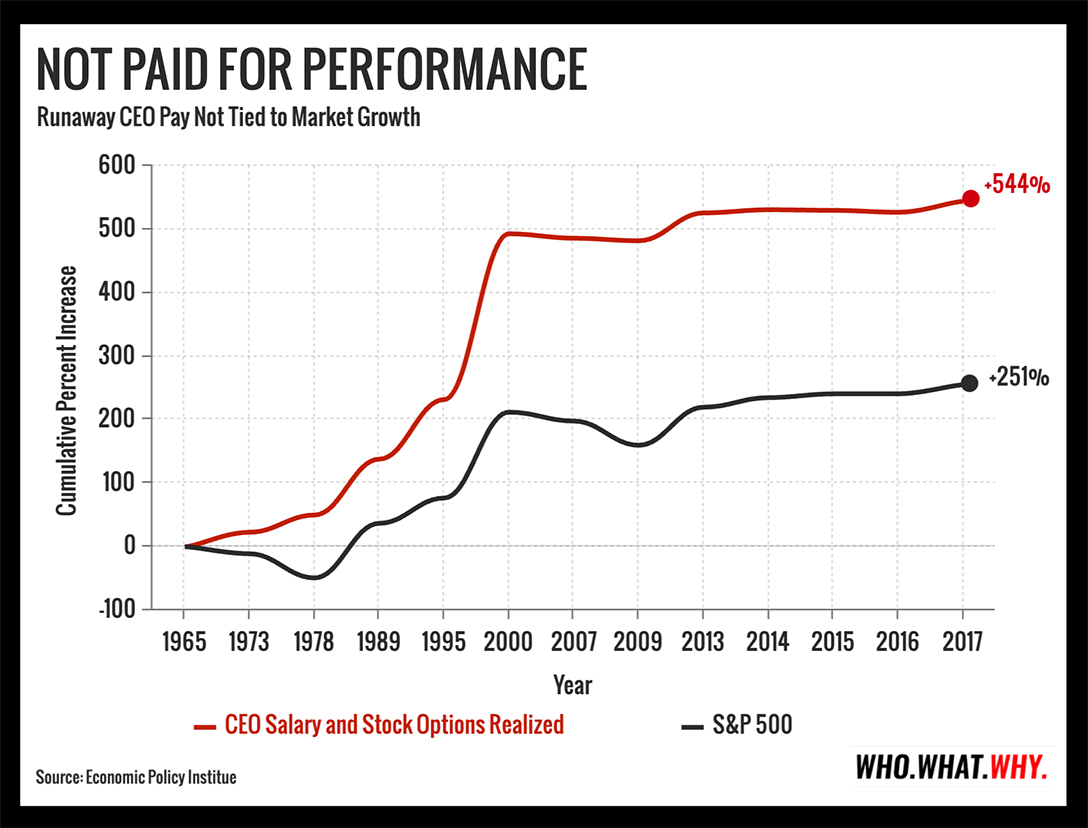 Jackpots like these have become the single largest contributor to the skyrocketing share of income going to America’s top 0.1 percent.

Leveraging the power of the public purse, predistributionists believe, can begin reversing these trends. We already leverage that power, they point out, against racial and gender inequality. Companies that discriminate by race or gender in hiring, for instance, cannot gain government contracts. Our tax dollars, Americans agree, should not subsidize enterprises that increase racial or gender inequality.

Why, then, should we let tax dollars subsidize economic inequality? Our tax dollars today undeniably do. Hundreds of billions of tax dollars annually flow — as government contracts or tax breaks or outright subsidies — to companies that pay executives hundreds of times more than their workers.

Lawmakers across the US are moving to limit this flow. In Oregon, the city of Portland now taxes corporations with executives making more than 100 times worker pay at higher rates than firms with more modest CEO/worker pay ratios. A half-dozen states are considering similar legislation.

At the federal level, Senators Bernie Sanders (I-VT) and Elizabeth Warren (D-MA) are backing legislation that would raise the corporate tax rate on companies where CEOs collect cash and stock awards that run over 50 times the pay that goes to typical company workers.

Our current economic order offers corporations no comparable incentive to raise worker wages. Indeed, the more corporate execs squeeze workers, the bigger the potential jackpot they can pocket. Outrageous rewards give them an incentive to behave outrageously.

Sanders, Warren, and other similarly inclined lawmakers are also pushing for redistributive changes in the tax code. A sustainable offensive against economic inequality, they understand, requires efforts to redistribute wealth already concentrated at the top and efforts to keep wealth from concentrating in the first place.

Sam Pizzigati co-edits Inequality.org. His recent books include The Case for a Maximum Wage and The Rich Don’t Always Win: The Forgotten Triumph over Plutocracy that Created the American Middle Class, 1900-1970. Follow him at @Too_Much_Online.

One response to “A Primer on Puncturing Plutocracy”