Back in 2015, when President Donald Trump announced his candidacy at Trump Tower in front of dozens of cheering paid Hollywood extras, few people grasped that social media would become his secret sauce.

By then, Trump commanded an invisible battalion of only a few million — which grew to an army of 80 million over the course of his presidency — to whom he could talk directly, not only on Fox News, but also in 280 characters as many times a day as he felt the urge, and all with his trademark cocktail of hatred, xenophobia, self-praise, and self-pity.

Trump’s campaign staff was so wise in the ways of social media that they accepted Facebook’s offer of help, whereas the Clinton campaign rejected it. The two then worked cheek by jowl — Mark Zuckerberg’s pale downy cheeks next to Trump’s tanning-parlor jowls. Aided and abetted by Cambridge Analytica and Vladimir Putin’s social media bots, the effect was Facebook’s infection of the body politic with Trump’s own special brand of mayhem.

Trump’s lies were able to travel halfway around the world before Hillary Clinton could get her pantsuit on.

Trump’s use of Twitter in the 2016 campaign, and over the last three-plus years in the White House, has been brutally effective. Initially it caught everyone off guard, much like the introduction of catapults in the Middle Ages. There seemed to be no defense that Trump’s social media feed could not breach. Under his constant assault, truth itself turned out to be a puny adversary. 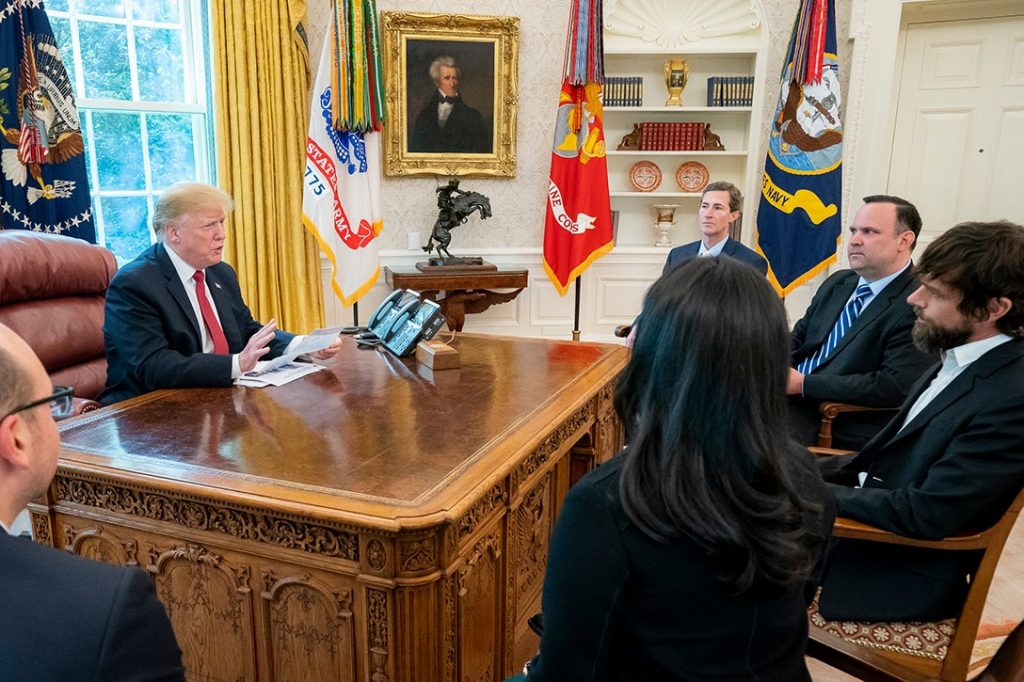 For those of us of a certain age, it is all but incomprehensible that government policy can thus be trotted out on a private social media feed. Trump has not needed or wanted a federal bureaucracy to command. He has become in the White House what he was in Trump Tower — a one-man band. Who needs cabinet officers, position papers, scientific research, speechwriters, press officers, or fact checkers when Trump has his own inexhaustible source of material?

While Trump ran on a platform of draining the swamp, he has instead brought to the capital a cesspool of ancient grievances, falsehoods, hypocrisies, quack cures, conspiracy theories, and other humbuggeries that he spews out on a daily basis. Sitting in his bathrobe early in the morning, typing out a blitz of tweets, misspellings and all, he has been able to speak directly to his base without a single person around to mediate his id or temper his lies.

Something has shifted over this last month. A crack in the earth. A tremor in the land. People have begun to notice that Trump’s tweets seem not only more depraved but also more frequent. Somewhere between 30,000 and 50,000 COVID-19 deaths, one wag posted a meme of Trump playing the violin, like Nero fiddling while Rome burned. The president retweeted it, adding, “I like it.”

To the extent that Trump ever made any pretense of being “presidential,” that mask is as absent as his PPE. Through his pandemic task force press conferences, the electorate has seen the angry, cruel despot at the head of their government. The old expression, to live by the sword is to die by the sword, seems to apply here. Now his Twitter feed is forensic evidence to be used against him in his case for reelection.

If the pandemic briefings slowly built a rise into the graph of voter consternation, the peak started Memorial Day weekend and has not yet flattened. One Trump tweet charged his one-time friend and former Republican Congressman Joe Scarborough with the murder of a young staffer who died suddenly in his Florida office in 2001. One of his tweets said: “When will they open a Cold Case on the Psycho Joe Scarborough matter in Florida. Did he get away with murder? Some people think so.”

Scarborough happened to be in Washington, DC, at the time of the staffer’s death, and an autopsy revealed that said staffer had a heart issue that caused unconsciousness and led to a fatal fall. For the president to use his Twitter feed to accuse a political critic of murder gives a whole new meaning to the hoary concept of the “bully pulpit.”

“Some people” believe the earth is flat.

When will they open a Cold Case on the Psycho Joe Scarborough matter in Florida. Did he get away with murder? Some people think so. Why did he leave Congress so quietly and quickly? Isn’t it obvious? What’s happening now? A total nut job!

Trump’s second tweet storm attacked the notion of voting by mail as inherently corrupt. A first-ever fact check by Twitter advised its followers to look into the matter themselves. Hint: voting by mail is no more inherently corrupt than voting in person. Mild though it was, this rebuke from Twitter proved too much for Trump’s paper-thin skin. He promptly threatened government action. Talk about biting the hand that feeds you.

This all has proved too much, even for loyal Trump supporters. The Wall Street Journal, owned by Trump’s friend Rupert Murdoch, wrote that the accusation against Scarborough was “ugly even for him.” The National Review, publishing on the right, but with a far more jaundiced view of the president, had a similar take: Trump’s Scarborough tweets were “grotesque even by his standards.”

Trump has a history of turning viciously against his friends, and now he is turning against the very platform that has allowed him to “publish” more BS than anyone had previously thought possible, threatening through executive order to bring the full weight of the US Government on Twitter, Facebook, and Google so he can continue his stream of falsehoods and libels unabated. If he has to call on the Justice Department or the Supreme Court, he will. No one is going to get between Trump and a good lie.

Thank you Cowboys. See you in New Mexico! https://t.co/aCRJeskUA8

A few days after the fact checking rebuke, Trump retweeted a video on which a supporter said, “The only good Democrat is a dead Democrat.”

Then on Thursday night came Trump’s “when the looting starts the shooting starts” tweet, widely interpreted as a threat of military action against demonstrators protesting the murder of George Floyd. Twitter flagged it as violating the site’s policy against glorifying violence — the first time Twitter ever hid a post by Trump. With Minneapolis burning, Trump fiddled with his phone — adding fuel to the fire.