Three years ago, Mikheil Saakashvili, the ex-president of the former Soviet Republic of Georgia, was ridiculed in a comedy sketch. The Ukrainian comedian who impersonated Saakashvili called him an “amazingly corrupt” cocaine addict.

Last year, that comedian, Volodymyr Zelensky, became Ukraine’s president — and a household name in the US because of a phone call that ultimately led to President Donald Trump’s impeachment. And last Wednesday, he offered Saakashvili the position of his deputy prime minister in charge of reforms.

Saakashvili accepted the proposal — and pledged both to “save” Ukraine from the economic meltdown caused by the coronavirus pandemic and to negotiate a multibillion-dollar loan from the International Monetary Fund.

“We need to take very unorthodox steps not only to save Ukraine’s economy but to maximally weaken the impact [of the meltdown] on each Ukrainian family, to save the state,” Saakashvili told pro-Zelensky lawmakers two days after the offer.

But Saakashvili is such a controversial choice that it’s not clear Zelensky’s own Servant of the People Party will approve him. As of Friday, Zelensky allies were frantically trying to assemble enough support to win a parliamentary vote later this week.

Even getting the offer, though, shows Saakashvili is a political phoenix, one who can immolate his career and alliances only to rise from the ashes and start anew — even a thousand miles from his motherland, where he led a bloodless revolution and lost a bloody war.

He was Georgia’s fiercely pro-US president from 2004 to 2013, the governor of Ukraine’s corrupt and crime-ridden Odessa region from 2015 to 2016, and a stateless exile after then-President Petro Poroshenko stripped him of Ukrainian citizenship in June 2017.

Some analysts hope that Saakashvili, once a poster boy for pro-western in the former Soviet Union, will help improve US–Ukrainian ties that frayed after Trump was impeached for freezing almost $400 million in military aid to Kiev to pressure Zelensky to investigate Hunter Biden, the son of Trump rival Joe Biden. 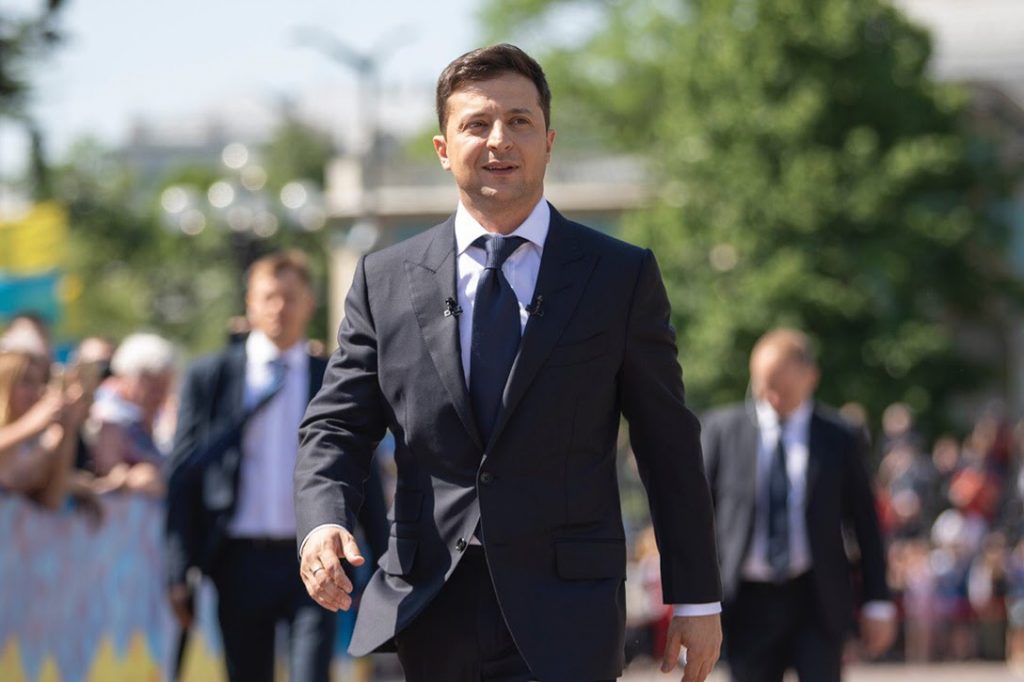 Volodymyr Zelensky at his inauguration in Kiev, May 20, 2019. Photo credit: Mykhaylo Markiv / The Presidential Administration of Ukraine / Wikimedia CC BY 4.0)

“Should his reforms succeed and bring about a more effective, transparent, and less corrupt Ukraine, it will undoubtedly improve Ukraine’s relations with its Western partners,” Diyar Autal of Harvard University’s Davis Center for Russian and Eurasian Studies told WhoWhatWhy.

He points out, however, that Saakashvili neither authored nor implemented the reforms that transformed Georgia from a notoriously bureaucratic and corrupt ex-Soviet state into a beacon of transparency. That was the work of billionaire businessman and Economy Minister Kakha Bendukidze and his reformist allies, who relied on Western expertise and funding to restructure Georgia’s bureaucracy.

“We have yet to see if SaakashviIi can indeed be an effective reformer,” Autal added.

Despite the optimism of some observers, others remain skeptical, citing Saakashvili’s political ties and unpredictable, explosive temper as impediments to dealing successfully with the Trump administration.

“The effect in communicating with the US is doubtful — Saakashvili is more tied to the Democrats,” Kiev-based analyst Aleksey Kushch told WhoWhatWhy. “The services Zelensky could provide to Trump need a middleman with a psychological type different from Saakashvili’s.”

Saakashvili was a 35-year-old graduate of Columbia Law School when he led Georgia’s 2003 “Rose Revolution,” a series of pro-Western demonstrations that precipitated the resignation of President Eduard Shevardnadze, the USSR’s last foreign minister and later pro-Russian gerontocrat at the helm of the South Caucasus republic.

Champions of democracy in the former USSR saw Saakashvili as a trailblazer who paved the way for Ukraine’s Orange Revolution and Kyrgyzstan’s Tulip Revolution, which erupted in 2005 and resulted in the installation of pro-Western governments.

“He was a man of high voltage, extremely sincere in his fight,” Nigara Khidoyutova — an exiled opposition leader from Uzbekistan who met Saakashvili in 2004 in Washington, DC — told WhoWhatWhy. 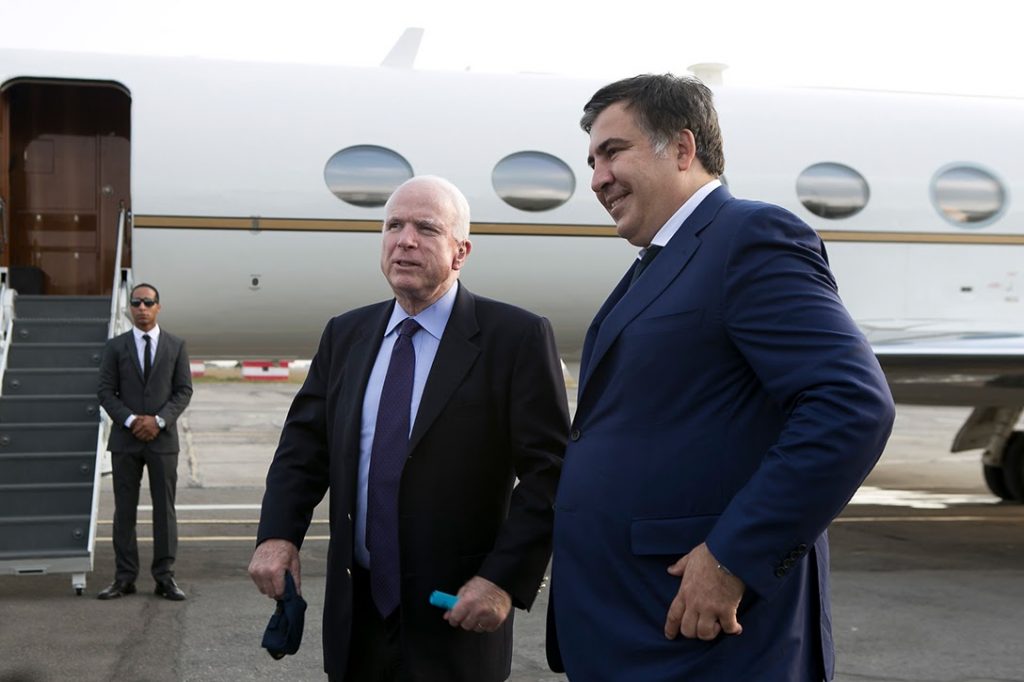 But Russian President Vladimir Putin saw the trio of “color revolutions” as dangerous, Western-funded uprisings that might be replicated in Russia. Saakashvili became his personal enemy — and an excuse to tighten political screws in Russia.

The Kremlin tested its resurgent belligerence on Georgia in 2008, provoking Saakashvili into starting and losing a five-day blitzkrieg over two breakaway provinces whose “independence” Moscow immediately recognized.

The 2008 Russo–Georgian War became a blueprint for Russia’s 2014 annexation of Crimea and support of separatists in southeastern Ukraine.

In Georgia, Saakashvili’s reputation for competence and transparency waned. His approval ratings declined and former corruption-fighting allies abandoned the reformist coalition. Responding to increased pressure and scrutiny, Saakashvili resorted to heavy-handed tactics: verbally attacking political opponents, ramping up incarceration through a “zero tolerance” approach to criminal justice, and eavesdropping on his critics.

“We are afraid of bugs even here,” a veteran Georgian journalist told this reporter in a noisy, spacious restaurant in Georgia’s capital, Tbilisi, within weeks of the war’s end.

As his second and last term was ending, Saakashvili, determined to remain in power, adopted the same strategy his archenemy Putin had in 2008, and began angling for the office of prime minister. However, when his party lost a parliamentary vote to a pro-Russian oligarch in 2012, he cast aside all political ambitions in Georgia and relocated to Brooklyn.

Three years later, he found himself allied with another oligarch — Petro Poroshenko, Ukraine’s president and richest man, and Saakashvili’s former classmate at a Kiev university in the early 1990s.

What followed looks like a recap of a Charlie Chaplin movie.

Police chased him on rooftops, caught and lost him, violently clashed with his supporters, and deported him to Poland. He crossed the border illegally — pitching a tent in central Kiev and inspiring the Zelensky comic sketch — but was kicked out again and lived in Poland as a stateless exile.

But Saakashvili’s life is full of U-turns.

In 2019, he supported Zelensky’s fledgling campaign based on anti-establishment and anti-Poroshenko slogans. After winning the presidency, Zelensky restored Saakashvili’s passport and let him return to Ukraine.

A year into his presidency, Zelensky’s populist promises have not materialized, and his approval ratings have fallen below 50 percent. The appointment of a polarizing figure like Saakashvili looks like Zelensky’s desperate attempt to jumpstart reforms and rescue his reputation.

But the move alienated some average Ukrainians.

“They so deserve each other,” Oleh Sinitsa, a software designer in Kiev, told WhoWhatWhy. “Two clowns found each other.”

Analysts claim that Saakashvili’s explosive temper will trigger an inevitable falling out with the president.

“In a year or two, he will become Zelensky’s archenemy,” analyst Andrey Petrenko wrote in an op-ed published by the DS News website.

Meanwhile, some anti-Saakashvili figures in Georgia hint at a deterioration of bilateral relations.

“I don’t rule out a revision of diplomatic ties,” lawmaker Rati Ionathamishvili told the Imedi television network on Thursday.

One response to “Can Controversial Ukrainian Fixer Appease Trump?”