On Easter Sunday and into Monday, dozens of tornadoes carved destructive paths from northern Florida to southwest Virginia and as far inland as Texas and Arkansas. The unforgiving storms left blackouts, devastation, and heartbreak in their wake. They ripped open homes, ravaged businesses, and pulled down electrical lines, taking at least 30 lives and leaving 1.3 million people without power.

Now, those affected must deal with complications the coronavirus brings to disaster response for governments, individuals, and aid organizations already stretched thin by weeks of fighting the pandemic.

“Dealing with the pandemic and natural disasters at the same time has been a challenge for sure,” said Josh Johnson, chief meteorologist at WSFA 12 News in Montgomery, AL. “It puts people in a position where they’re having to make a tough decision.”

Social Distancing — In a Storm Shelter

Johnson said he had talked to many people who usually head to tornado shelters during a storm but chose not to this time around because they feared the risk of infection posed by close proximity to others.

The Alabama Department of Public Health has advised residents that they should prioritize seeking shelter during tornado warnings over maintaining social distancing. For some, the decision is not so black and white.

“If you’re a healthy 25-year-old, then it’s a no brainer — shelter from the tornado. But if you’re a 70-year-old asthmatic with preexisting health conditions, what do you do then?” Johnson asked.

These weekend storms and the difficult choices they thrust on people may foreshadow what comes next for the United States as a whole.

Experts say it’s time to get ready for the inevitable: natural disasters striking during the coronavirus pandemic.

“We have already had an above average tornado season and there is no reason to think that will stop,” said Johnson.

As the weather warms and summer creeps closer, other types of storms wait just around the corner.

In a month or so, hurricanes will start brewing, driving heavy rains and gusty winds up the Atlantic coast.

The season officially begins on June 1, with peak storms usually hitting between August and October, but that doesn’t mean they couldn’t start arriving earlier. Just a few days ago, Colorado State University issued its annual prediction of how the hurricane season will play out in 2020. The experts anticipate another year of above-normal activity, including 16 named storms and eight hurricanes, four of which, they forecast, will be major threats.

The vast nature of hurricanes often requires large scale evacuations and results in immense displacement. In 2005, the famously destructive Hurricane Katrina displaced over one million people in the gulf coast region, 600,000 of whom were still dislodged a month later.

Another type of devastating natural disaster, wildfires, are a potential threat year-round, though they tend to spike in the fall. Risk of wildfires is predicted to be normal across most fire-prone regions of the US for the early 2020 season.

In addition, major to moderate flooding is expected in 23 states this spring, according to the National Oceanic and Atmospheric Administration.

In the time of COVID-19, the novel respiratory disease that has taken the lives of over 125,000 people and infected over two million globally, escaping the effects of these disasters will be more challenging than ever.

Being in close contact with others risks transmitting the coronavirus — making shelters extremely hazardous — and means that staying with family members may spread the disease between loved ones.

So where do they go? Even those who can afford it may not find a hotel — many of which have been shuttered.

Will people be forced to throw themselves into the path of the coronavirus, just as authorities are starting to get control of it? 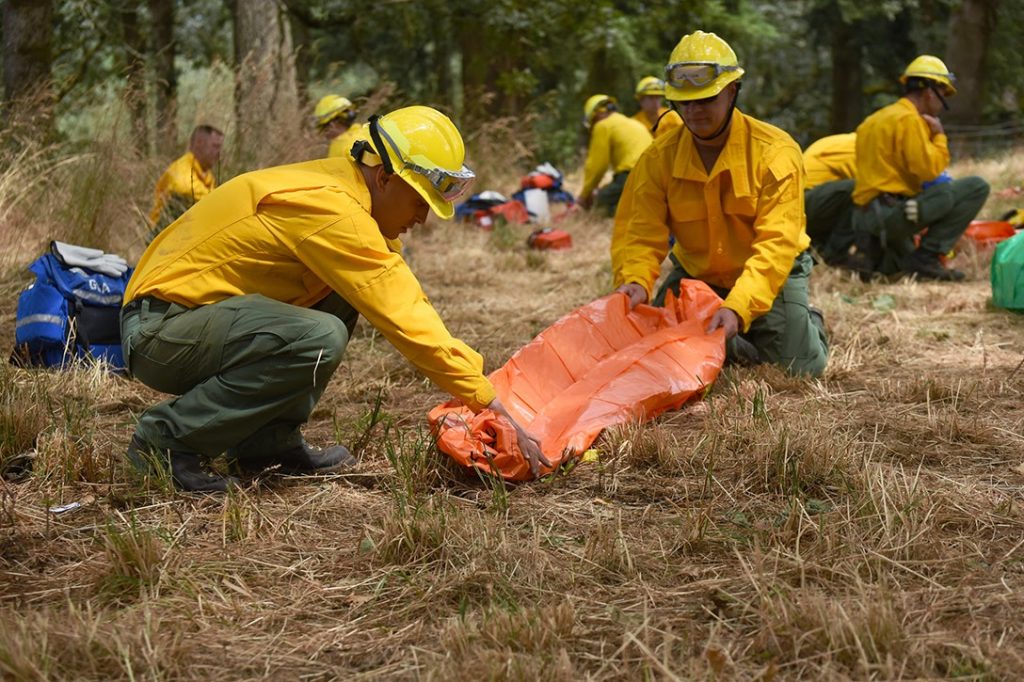 Oregon National Guard Soldiers and Airmen conduct refresher training on how to use an emergency fire shelter at the Oregon Department of Public Safety Standards and Training academy, in Salem, OR, August 15, 2017. Photo credit: Oregon National Guard / Flickr (CC BY 2.0)

Efforts to diminish the impact of the coronavirus, or “flatten the curve,” through social distancing seem to be working. However, it is unlikely that life can return to normal anytime soon. Sobering information from the Department of Homeland Security shows that the number of cases will spike again if social distancing restrictions are loosened, reported the New York Times.

The ultimate solution — a vaccine — is not likely to be rolled out until 2021, said Jeffrey Shaman, director of the Climate and Health program at Columbia University’s Earth Institute.

The coronavirus isn’t going anywhere anytime soon, and “the weather isn’t going to stop because there is a pandemic going on,” said Rob Dale, meteorologist and regional planner of Homeland Security and Emergency Management in Lansing, MI. “The best thing we can do is prepare.”

Dale wants people to start asking questions now about how to prepare for disaster season.

How can evacuations take place safely while maintaining social distancing? What can be done to prevent shelters from becoming hot spots for COVID-19? How many more people, some of whom have also lost their means of income, will need extra support this year?

Individuals, as well as government agencies, should begin planning, Dale said. He hopes that during this time, when resources are stretched thin, people will think about how they can help themselves and their families when natural disasters arrive.

“We missed the eight ball on corona[virus] because we didn’t pay attention,” said Dale. “We know tornados are coming, hurricanes are coming, wildfires are coming, we have to let people know — ‘This is going to happen.’” 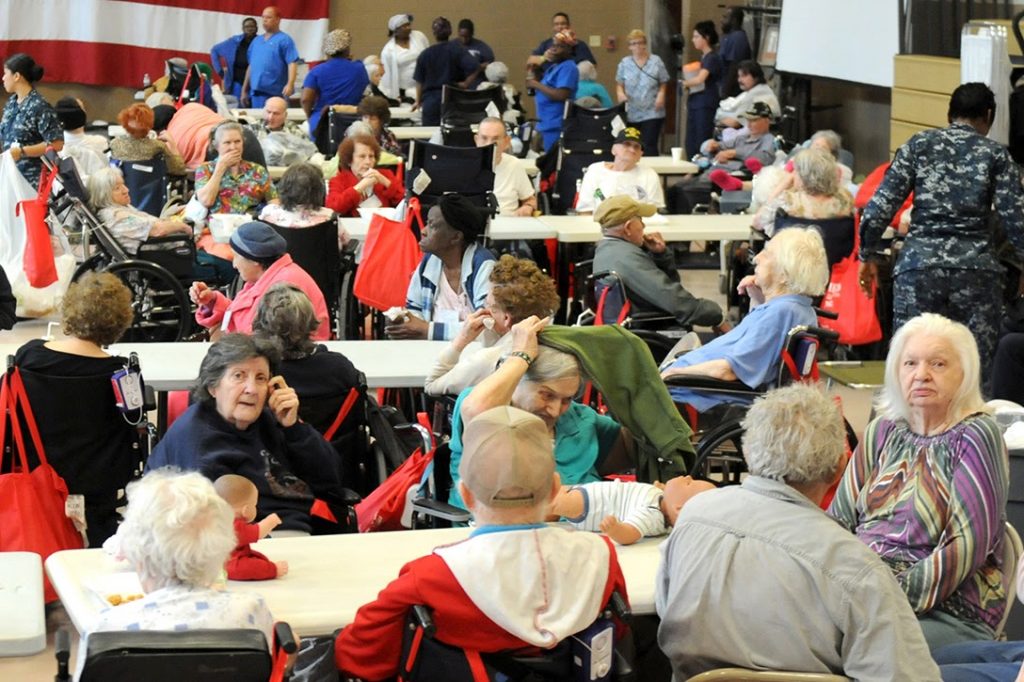 Currently, that is not the mindset among government leaders. Instead, states are paying less attention than usual to natural disaster preparedness and throwing all their resources at the pandemic.

Ohio and Indiana, among other states, canceled their annual tornado drills, which test communication and safety plans.

The 2020 National Hurricane Conference — created to share the latest information and exchange ideas in order to improve hurricane preparedness, response, and recovery — was called off.

The Los Angeles Times reported that wildfire season preparations are being affected as well: “The outbreak has already forced departments to put large training exercises on hold [and] cancel controlled burns.”

One thing is certain: playing by last year’s rulebook won’t cut it.

“Many of the things we normally do aren’t going to work,” said Bryan Koon, former director of the Florida Division of Emergency Management. “We can’t just organize and open large shelters and have people go there.”

The main tool deployed to fight the spread of the coronavirus is social distancing, which means people must stay at least six feet away from each other. Many disaster response efforts put people in close quarters, whether it be on a plane for first responders to make their way to the scene, a bus to bring people to an evacuation center, or a boat to escape flooding; all these crowded environments are dangerous in the time of the coronavirus.

This complicates things for aid organizations that are already overextended.

Many states in the South and the Midwest, most likely to be hit by hurricanes, floods, and tornadoes, are doing the least social distancing.

On Unacast’s COVID-19 Social Distancing Scoreboard, the most states with a C+ and below on a scale of A–F, lie in the central and southeastern regions of the country.

The states with low or failing scores on social distancing include Florida and North Carolina, which suffered the most direct hits by devastating storms from 1995 to 2017. Texas, which was hit by the triple threat of Harvey, Irma, and Maria three years ago, is another state that scored a C.

In 2017, when Harvey, Irma, and Maria tore through the South and Puerto Rico, nonprofit organizations, individuals, and all levels of government jumped into action. Organizations such as FEMA and the American Red Cross provided millions of gallons of water and meals, as well as temporary shelters for the displaced.

How will aid groups function if their employees and resources are already exhausted by months of nonstop struggle against the pandemic?

Clearly, more people than usual are going to need extra support when natural disasters hit this time around. Over 10 million people applied for unemployment insurance in March alone, meaning fewer people have the necessary income to support themselves during a disaster.

“Our ability as Americans to afford the gas and hotel money needed to evacuate will be diminished because of increased unemployment rates,” said Koon, who is currently vice president of Homeland Security and Emergency Management at IEM, a disaster-preparedness and-response company.

In normal circumstances, resources are shared across state lines in order to respond to disasters and help those who need additional aid. Responders jump to action at a moment’s notice, traveling across the country to fight wildfires in California or deliver clean water after a hurricane in Alabama.

“Now everyone needs their people in their hometowns to deal with coronavirus,” said Koon.

To best handle this unprecedented situation, “we must work collaboratively,” he said — which means planning on a national level.

“Our planning assumptions are completely different from ever before. What will we do to meet this threat?” asked Koon. “How will we recover from a disaster within a disaster? I don’t know.”

There are many questions and few answers. But the clear message from Koon and other experts is that, now, rather than later, is the time to start looking for them.