The nominee, James E. “Trey” Trainor III, refused to answer direct questions from Democratic lawmakers during a contentious confirmation hearing in the Senate Rules Committee, and he was often forced to defend his involvement in Texas gerrymandering efforts.

The hearing came more than two years after Trainor was first nominated in September 2017. Trainor served on the Trump 2016 presidential campaign and previously fought against the Texas Ethics Commission to keep a dark money group he represented from having to reveal its donors.

“Abandoning bipartisan norms and pushing forward a controversial nominee is not the way to do it,” Klobuchar said during her opening remarks. “Moving forward in this way does more harm than good.”

Senate Minority Leader Chuck Schumer (D-NY) made a rare appearance during Trainor’s confirmation hearing and called it an “unhappy occasion for a reunion.”

Schumer raised a number of questions about Trainor’s “fitness” to serve on the FEC, including his past ties to the late GOP gerrymandering guru Thomas Hofeller. Most of the Democratic lawmakers on the committee pressed Trainor about this part of his resume — something WhoWhatWhy exclusively reported on earlier this year. 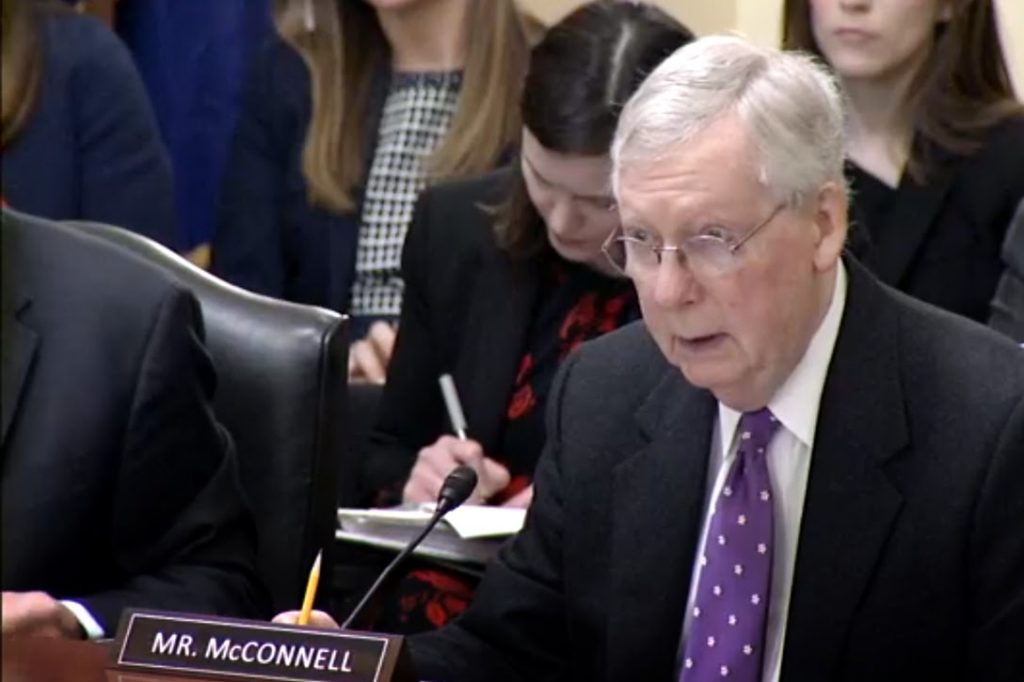 Senate Majority Leader Mitch McConnell (R-KY) makes a statement before the Senate Rules Committee, on March 10, 2020, during the confirmation hearing for James E. “Trey” Trainor III’s nomination to become a member of the Federal Election Commission. Photo credit: US Senate

“It’s imperative that every member of this body fully consider Mr. Trainor’s record and weight of what a vote for or against his nomination would mean for efforts to limit the influence of big, dark money in politics and root out corruption at all levels of our political process,” Schumer said.

Trainor defended his involvement in redistricting efforts in Texas and his relationship with Hofeller. When questioned by Sen. Roy Blunt (R-MO), Trainor argued that Hofeller was an “ideal witness” for his client at the time — the state legislature — because he was previously certified as an expert in federal court.

Senate Majority Leader Mitch McConnell (R-KY) also made an appearance during the hearing and urged the committee to confirm an entirely new slate of six commissioners. In an unconventional move, McConnell asked Trainor three questions while sitting next to him on the witness panel.

What is the source of campaign finance law? The First Amendment, Trainor responded. It’s the “touchstone for us,” he said. Trainor appeared to have signaled during his opening remarks that the Supreme Court’s controversial 2010 Citizens United ruling, which established that money equals free speech, was correctly decided.

What does Trainor view as the role of the FEC? It gives voters confidence in our electoral system, he suggested. People visit the agency’s website on a daily basis, he said. It helps to deter corruption. One priority he would have as commissioner, Trainor later added, would be a redesign of the FEC’s website to make it more user-friendly.

Exposed: Partisan Gerrymandering Based on Race

Does Trainor believe that the FEC is failing to enforce the law? No. Entities that fail to meet filing deadlines are automatically fined, Trainor added. He also promised to “apply the facts to the law fairly” if any case concerning Trump is brought before him, but he would not directly answer questions about recusing himself.

Meredith McGehee, executive director of the political reform group Issue One, testified that while it is “unacceptable” that the FEC has been without a quorum for more than six months, confirming a nominee “who does not think we should enforce the nation’s campaign finance laws will only make matters worse.”

Since the agency’s vice chair, Matthew Petersen, resigned in August, the FEC has been without the minimum requirement of four commissioners. Without a quorum, the agency has been unable to carry out some of its most basic and important functions, the longest time in its history that it has been unable to enforce campaign finance laws.

Even if Trainor is confirmed, two seats would remain unfilled and the Senate has yet to receive another formal nomination. Senate Democrats last year suggested the consideration of Shana Broussard, an attorney and longtime assistant to FEC commissioner Steven Walther, but the White House has yet to respond.

“The best way to protect our elections — and increase public confidence in them — is for the president to nominate, and the Senate to confirm, individuals who will put their constitutional oaths to uphold the law above personal ideological views,” McGehee said. “Anything short of that will only continue the dysfunction at the FEC.”

Also on Capitol Hill on Tuesday, intelligence officials from the Trump administration briefed Congress on the current foreign threats to the 2020 election. Acting director of national intelligence Richard Grenell, however, did not appear and reportedly had asked to be excused because he anticipated questions from lawmakers about Russia’s continued interference.

Trump’s efforts to discredit the fact that Russia interfered in the 2016 election on his behalf continued on Twitter, where he lashed out before the briefing:

“There is another Russia, Russia, Russia meeting today. It is headed up by corrupt politician Adam ‘Shifty’ Schiff, so I wouldn’t expect too much!”