As of March 5, COVID-19 has spread to more than 80 countries and infected more than 95,000 people, killing more than 3,000, most of them in China. Still, in the US, fatalities remain low, and the outbreak seems most pronounced in the state of Washington. Under 200 cases have been detected.

But if these reports have lulled you into some sense of security, this is a trigger warning: Epidemiologist Michael T. Osterholm is challenging many common assumptions about the virus.

The US may escape the full brunt of the coronavirus outbreak.

Osterholm, who directs the Center for Infectious Disease Research and Policy at the University of Minnesota, predicts that this country is on the verge of detecting thousands of cases.

“We are in the opening scene of what I call this corona winter,” he said during a March 3 webcast sponsored by the New America Foundation. “We can expect to see a large number of deaths … moving forward.”

The reason the US has reported relatively few instances of infection, he explained, is due to the lag time testing individuals showing symptoms of the disease.

“There is widespread transmission going on in this country right now,” said Osterholm, who authored the 2017 book, Deadliest Enemy: Our War Against Killer Germs. “It’s just being missed. As soon as we have testing we’re going to see it.”

The CDC developed a diagnostic test that did not work, and imposed such strict criteria on tests — a recent trip or recent contact with someone from China — developed by state, local, and hospital laboratories that few people who had symptoms were assessed.

“It was really a very unfortunate situation,” he said. “We didn’t have the kind of testing here in this country that much of the rest of the world has enjoyed for at least four to five weeks.”

“It could have happened under anybody’s administration,” Osterholm said. “But there should have been a plan to deal with it when it happened. And there wasn’t. That’s what frustrated people out here in the field. We knew we had transmission ongoing. Unfortunately, we were in a sense reinforcing … this fantasy that we somehow had stopped transmission coming into this country.” 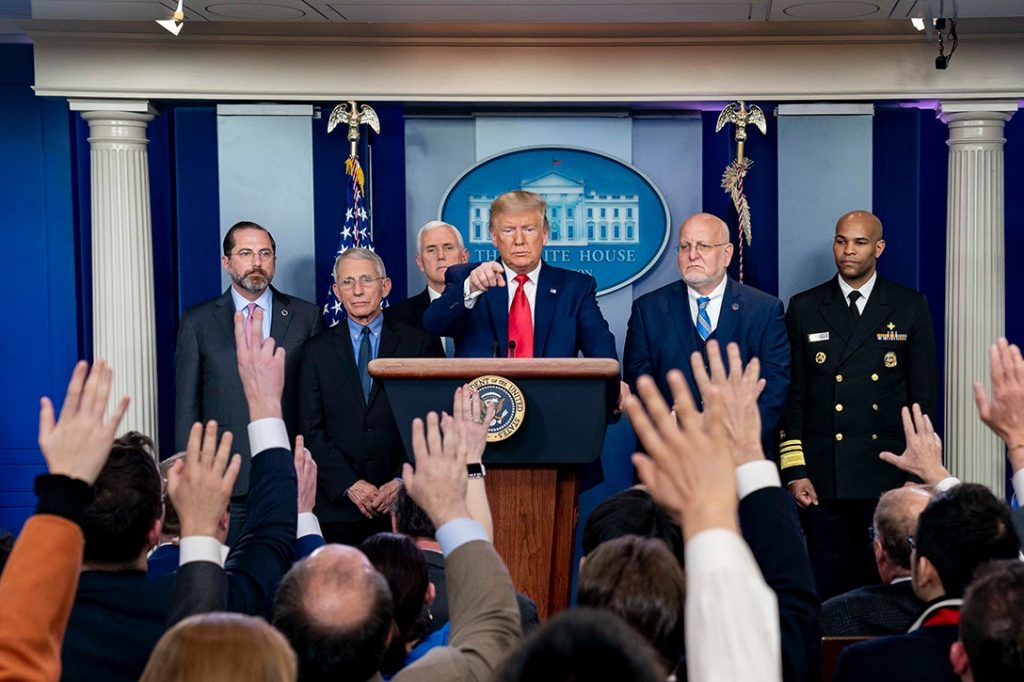 While Iran, Italy, South Korea, and China seem to have the most cases right now, few countries will escape, he predicts. “This is a global influenza pandemic caused by a coronavirus. Assume it’s everywhere.”

China’s strict containment rules can work for the US.

Osterholm says that we’re too late for effective containment in the US, and he doubts that even the Chinese have totally addressed the problem.

He explains that the coronavirus has a transmission rate that is higher than even seasonal flu. During an average flu season, a sick individual will transmit the virus to 1.4 people, he said. Someone with coronavirus will spread it to 2.5 individuals.

Even more problematic, individuals who don’t show symptoms may already be contagious, he said. It took about five to six weeks between the time that the virus “had jumped, potentially almost like a lightning strike” from an animal to human in Wuhan for the illness to be detected.

And since most people — about 80 percent — have no or mild symptoms, it took time for “that tip of the iceberg” of sick patients to emerge, he said. “By the time it got detected in Wuhan at the end of December, we were now talking about big numbers, going from 500 to 1,000, 2,000 to 4,000,” with major upticks registering every six to seven days.

While the Chinese “have clearly suppressed” the spread of the virus through drastic measures, he said, he doubts that the quarantines and travel restrictions have fully succeeded. “Today, the numbers are down slightly, but we’ve been averaging about 400 to 500 cases a day in China for the last ten days,” he said. “There’s still activity there.” He added that he expects “a major resurgence” of the virus “once China releases some of these population control measures to get the economy back working.”

He dismisses the efforts the US took to contain the virus — such as imposing quarantines on US passengers who visited certain countries, and screening passengers at airports — as unproductive. “All we did was fix three of the five screen doors on our submarine,” he said.

Our healthcare system is up to the task.

Osterholm said the nation’s hospitals are “absolutely not” ready, lacking the equipment they will need to take care of these additional sick people and protect their staff from infection. “Healthcare has been so financially in rough shape in this country, no healthcare organization has gone out and stockpiled lots of protective equipment. … Now we’re paying the price for that,” he said.

Compounding the problem is the fact that specialized equipment like N-95 respirator masks, which protect healthcare workers from infection, are in short supply. While the equipment is made in North America, factories can’t produce them fast enough to meet the growing need.

The Food and Drug Administration agrees with this assessment. Dr. Robert Kadlec, in charge of preparedness and response for the Department of Health and Human Services, told Congress that healthcare facilities will need more than 3 billion specialized masks should the outbreak become a pandemic, but that the supply in the US is down to 35 million.

Nor do hospitals have the resources to take care of severely ill COVID-19 patients in addition to their current patient caseloads, Osterholm said.

In his own Minneapolis-St. Paul region, he said, hospital beds equipped with sophisticated heart-lung machines — “very useful in keeping people with this illness (COVID-19) alive” — are filled with other patients who need them. There are no vacant beds.

Like the regular flu, COVID-19 will ebb when the weather gets warmer.

Osterholm acknowledged that’s possible. But there’s not much scientific data to back up that assumption, he said.

For example, while a typical influenza season in the Northern and Southern hemispheres occurs during winter, influenza circulates throughout the year in the tropics. “We’ve never understood that.”

In China, the people who were seriously ill were older men who likely smoked. If I’m not one of them, I’ll be okay.

Osterholm agrees that gender, age, and underlying health conditions were factors in China affecting who got the virus and died from it. But he worries that another condition that can affect heart and respiratory health is obesity. As COVID-19 infects countries where “obesity in itself is an epidemic problem” that could mean that obese adults, both men and women, may be more vulnerable to serious illness or even death from the virus.

You can protect yourself if you just wash your hands and don’t touch your mouth or eyes.

Osterholm files this assumption under “misleading information” that becomes fact if “it’s reported enough times. … There are some who have said that this virus is only transmitted via the hand to the face. That’s simply not true.”

He said that there is “compelling data” that the disease is transmitted through the air, and breathing makes one vulnerable. “Frankly, handwashing may play some role in this, but not nearly what people think it is. It’s all about the air, and the air you’re breathing.”