In Jordan, after a heated debate, one MP wanted to shoot another but was not allowed to bring his AK-47 into the parliamentary chambers. (And he, or perhaps someone else, seems to be wielding a knife.) He was ordered out into the hall, where he fired a shot, the noise of which interrupted a speech.

Well, there are limits to what will be tolerated. As shown in the video below, an emergency meeting was held, after which one member announced, “Some are suggesting to sack the member of parliament who did that.”

Violence in the US Congress was once fairly common, as a recent book documents. If the political culture grows any more polarized, could it return?

What kinds of things might Americans throw at each other?

Below is a small selection of videos showing parliaments in action around the world. But the last one is from America, featuring not a parliamentary brawl, but a heated conversation among politicians. No one brought an AK-47 to the meeting, but the power of rudeness was on display. 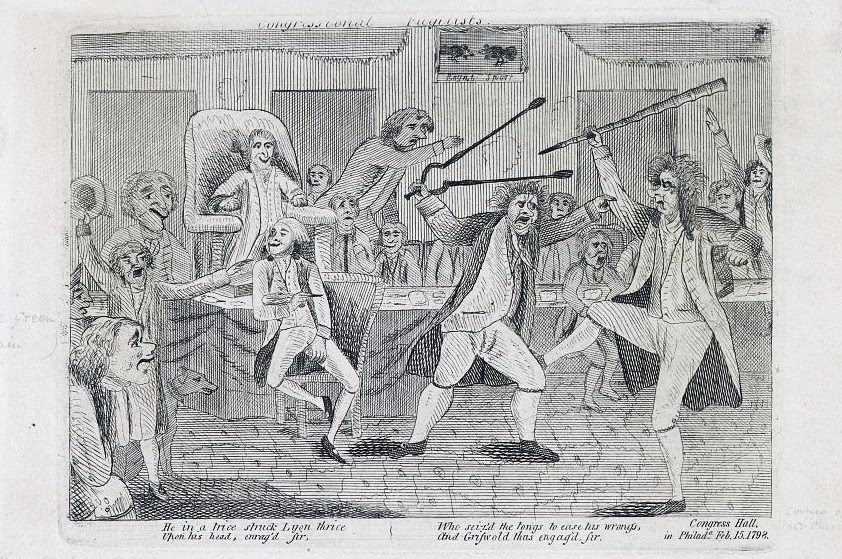 Cartoon by unknown artist: Congress Hall, in Philadelphia, published February 15, 1798. A crude portrayal of a fight on the floor of Congress between Vermont Representative Matthew Lyon and Roger Griswold of Connecticut. Photo credit: Library of Congress