Twitter, Trump, and Me: A Confession - WhoWhatWhy
Reading Time: 5 minutes

Hello, my name is Julian and I am an addict. My addiction has made me depressed and anxious, put a strain on my marriage, and wasted years of my life.

But here’s the good news: I have now been Twitter-free for three weeks.

It has been a rough road getting here.

I had my first argument with my wife over my “Twitter-ing,” as she calls it, in the lobby of a hotel in the Canary Islands in 2015. We were supposed to be on a family holiday but it was the run-up to the UK’s 2015 general election and I was standing in the WiFi hotspot obsessively trying to interpret various polling tweets. As my significant other tried to hustle me onto the bus to the airport I snapped angrily at her for disturbing my scroll quest, she got upset, I said “sorry” — after some duration of heavy silence. It didn’t stop me though.

I first heard mention of Twitter when I was working as an online editor in the newsroom of Telegraph.co.uk. It was circa 2008 and a colleague more tech-curious than I had just discovered the new social media platform. “One day,” he opined, “we will have a reporter on the news desk who just monitors Twitter, like we do the newswires.” Ha! What a gloriously quaint idea that was. Today, virtually every reporter, intern, editor, section head, columnist, and E-in-C, in every newsroom anywhere is having their attention consumed by Twitter.

The idea that Twitter would be a newswire for the common man, a breaking news tool, where good-faith actors would share events in real time was indeed exciting, noble and, indeed for a brief window, true. In 2012, when I was the editor of a news site startup, my young team, housed in a bleak rented space in London’s Docklands, beat the US news media big guns to the breaking story of the Colorado cinema mass shooting, because one of my social-media-savvy staffers came across an early tweet from someone in Denver. Our story of the mass shooting raced to the top of Reddit and was in prime position on Google for hours. Watching the views pile up was exhilarating. It was a brave new world. 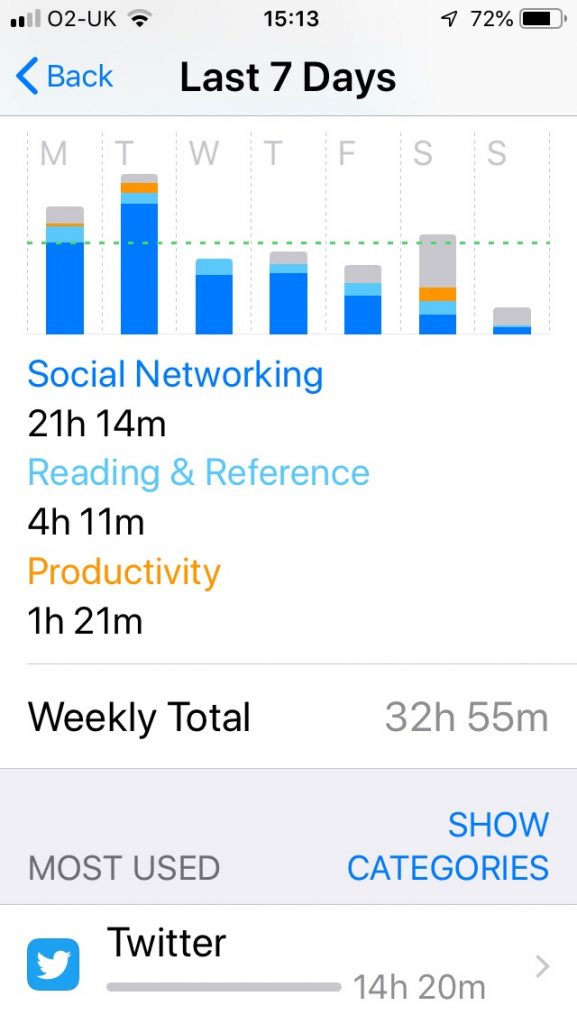 My phone usage data from the week of December 9–15. The battle against my Twitter fixation began on Friday. Photo credit: Screenshot

Very fast-forward and Twitter is now a repellent digital swill of fake news, toxic trolling, bot hordes out of St. Petersburg, vitriol, racism, digital manipulators, and its nexus, Donald Trump. As the  editorial by Christianity Todau said of the tweeter-in-chief: “His Twitter feed alone — with its habitual string of mischaracterizations, lies, and slanders — is a near perfect example of a human being who is morally lost and confused.” He is not the only one.

The mania of the real-time metrics has possessed the soul of many a journalist. They have abandoned core principles, whoring themselves for the egoistic rush and validation of hundreds of comments and thousands of retweets and likes. The language of the junkie now drives journalism. Reporters and writers crave (story) “hits” to make them happy. Like the heroin addict, editors, staring obsessively at the analytics, desperately need a “spike” in views to help an article shoot up and get them through another day.

In last month’s general election the UK’s most esteemed political editors, BBC’s Laura Kuensberg and ITV’s Robert Peston, were shamefully suckered by Conservative Party “sources” who invented a lie to change the optics on the story of the day, which the two supposedly best-in-class journalists hungrily retweeted without the most basic of checks. It took an hour for video evidence to reveal that the claim that an advisor of the health minister had been punched by a Labour Party protester outside a hospital was spurious nonsense — he had accidentally walked into an outstretched arm. But, via the tweets of British media’s big beasts, the smear was already spreading manically and settling in the public consciousness.  (Mea culpa. In this time I had rushed into the kitchen to report the “news” of the phony assault to Mrs. Kossoff — so shame on me, too.)

Three days later I took the pledge of abstinence. The general election polls had closed and the result was no longer in doubt. My compulsive trawling of Twitter — which really took on chronic dimensions as Brexit deadlines came and went, and was totally out of control by the time the election was called — searching for a tweet to lift my spirits, in 280 characters or less, could not go on.

I realized I had not read a book for six months. At the beginning of December, I desperately texted (illustrated with a tearful emoji) my teenage daughter — who is battling her own Instagram addiction — to admit that I was spending more than seven hours a day, according to the Screen Time settings on my iPhone, staring at my phone, the vast majority of that lost time spent wandering the Twitter badlands.

When I went to my local cafe in the morning, I was hating myself for the time wasted going down rabbit holes of abuse. I tried to alleviate the mental negativity by poking the red heart button on the rare tweets that were actually funny. But what I longed for was the comforting trinity of a white Americano, a croissant, and the holistic, half-an-hour offering of a daily newspaper, inky fingers and all.

Years back, washing my hands in the restroom at my news site’s offices, I watched in the mirror as a respected colleague stood at the urinal eyes fixed on Twitter on his phone — you know what the other hand was doing. I privately shook my head judgmentally. But I was to sink even lower. A couple of months ago I lost my phone at the gym. It was found on the toilet paper dispenser in the cubicle. I confess, I’d been reading crap whilst taking a… Could I sink any lower? It had to end.

Actually, like many addicts, I am a liar. My claim of abstinence is exaggerated. I am actually more akin to the reformed alcoholic who now claims he just has a glass of wine or two with a meal. I still check out Twitter every day but it is a much more managed experience. And when I do now hit the little white bird (of prey?) icon, the experience is akin to trying to smoke a cigarette after chewing on nicotine gum. It’s an ingrained reflex but just doesn’t taste right anymore and I have the strength to extinguish it quickly.

Father, give me the serenity to accept the things I cannot change,

the courage to change the things I can,

and the wisdom to know the difference.

PS: Since I began my de-Twittering I have read two books. And have not yet taken to Twitter to brag about it.