HONG KONG — An armed riot policeman aims his revolver directly at the face of a terrified female protester who is holding only a flimsy political poster which reads “heaven will destroy the CCP [Chinese Communist Party].”

The moment, captured by a photographer and posted on social media, symbolizes the new normal in Hong Kong. The incident also marked the abrupt termination of a peaceful human rights rally held in the city center in December, when thousands gathered in Edinburgh Place to support the Uighur ethnic group being oppressed in China’s Xinjiang Uighur Autonomous Region.

“We are here because we are afraid that what is happening in Xinjiang will happen in Hong Kong in the future,” says Tony Mak, a student at City University and a veteran of the pro-democracy protests that have disrupted the city for the last six months.

More than 400 pages of recently leaked official Chinese documents published in the New York Times revealed the imposition of what Chinese President Xi Jinping once called the “organs of dictatorship” in a private speech — a 21st-century Orwellian machine for control and surveillance in Xinjiang province.

Hong Kong’s cosmopolitan atmosphere and the remote mountains and deserts of the Xinjiang Uighur Autonomous Region in western China could not be more different. But attendees at this rally believe Beijing’s crackdowns on human rights in both regions are directly related.

Another Hong Kong protester tweeted a Chinese proverb to describe the connection — “an apple is an apple; it doesn’t matter where it is grown” — though in this case, the authoritarian apples are all grown in Beijing.

At last, #hongkongpolice take out a gun to point to the #HongKongProtesters. One of the woman, who only carry a paper, was pointed by a gun to her head? What did the police want to do? pic.twitter.com/uaAqSBvbFh

Symptoms of the Same Disease: Totalitarianism

Many in Hong Kong equate China’s intolerance of dissent and democratic aspiration in their city and the detention of more than 1 million Uighur Muslims in what Beijing calls “re-education camps” as symptoms of the same disease: totalitarianism.

Already, the number of people arrested for protest-related offenses exceeds the number of prison slots available in Hong Kong. Yet it’s not just imprisonment that people fear. As Beijing uses Hong Kong’s increasingly despised police force to crack down on dissent, people fear being shot or beaten, or just disappearing without a trace.

“If I lived on the Mainland I would just ‘disappear’ — I cannot go to the Mainland because I have participated in the pro-democracy movement in Hong Kong for many years,” says Li Hing-ling, 51, who enthusiastically waves Australian and British flags.

By “disappear” she was referring to the fate of many Uighurs who are being sent to compulsory “re-education camps.” They leave behind loved ones who are subject to 24-hour surveillance with CCP officials lodged in the family home where some “co-sleep” in the marital bed.

The repression of Uighur Muslims now being condemned around the world by high-profile figures — ranging from US Secretary of State Mike Pompeo to Arsenal soccer player Mesut Ozil — originated as a severe crackdown after violent street confrontations in July 2009 between Uighurs and members of China’s minority Han ethnic group. Following decades of social tension, the 2009 riots were triggered by clashes in a factory in distant Guangdong province, after male Uighur factory employees were accused of sexually assaulting female Han co-workers.

The official death toll of the riots was 197, with 1,600 wounded, and about 1,000 arrested — but, contrary to Chinese propaganda, these protests had little or nothing to do with religious persecution. They had more to do with social tension created as the CCP, determined to monopolize the political landscape by making Xinjiang more ethnically homogenous, encouraged Han migration to the distinctive semi-autonomous region.

“For Maoists like Xi Jinping, it’s all about the ideological battleground,” says Professor Willy Lam of the Chinese University of Hong Kong. He believes Xi is carefully constructing a police state to monitor and enforce political compliance across China and that Beijing will only tighten its grip on Hong Kong.

In both Xinjiang and Hong Kong, violent protests erupted when people came to believe that their legitimate grievances against government intrusion in local affairs only fell on deaf ears. 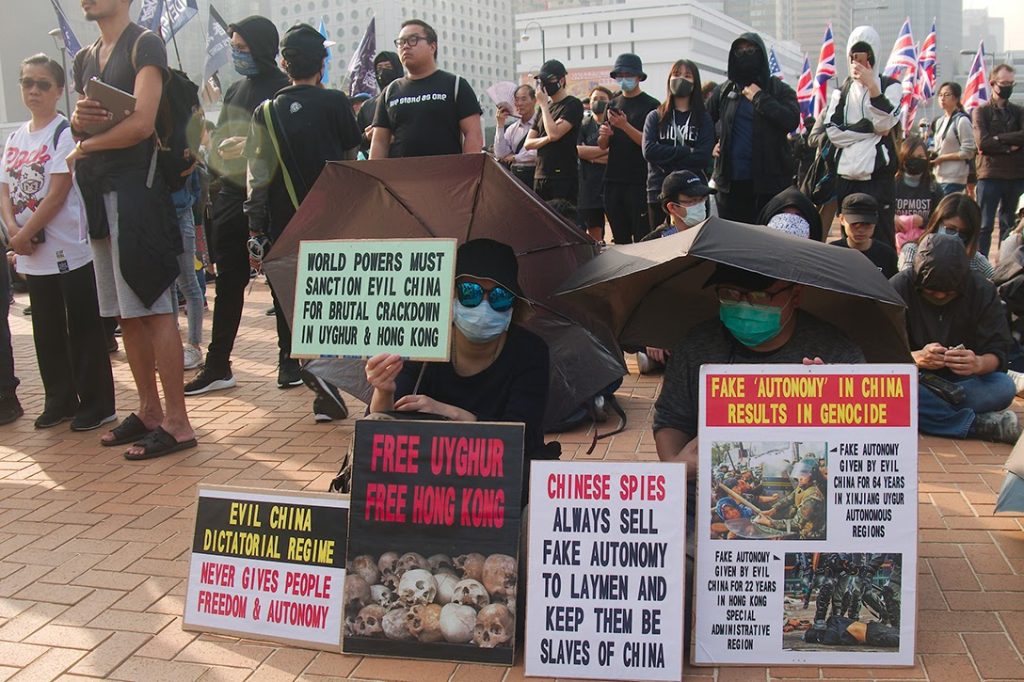 In both regions, loyal Han Chinese were encouraged by Beijing to migrate in order to dilute any flavor of local identity. Waves of mass migration from China’s heartland have raised Xinjiang’s Han population from 6 percent in 1949 to more than 40 percent in the official 2000 census. Entire new cities like Shihezi, some 150 kilometers northwest of Urumqi, have been built to accommodate them.

In Hong Kong the one-way permit system allows 150 mainland Chinese to settle in Hong Kong every day without being screened by city Kong authorities. Since July 1997, more than 1.2 million mainlanders have been resettled  in a city of 7.5 million, which suffers from an acute shortage of affordable housing.

Rather than accommodate grievances, Beijing has been accused of increasing social tension in its attempts to homogenize. It then attempts to snuff out dissent; in Xinjiang it has condemned Uighur activists as Islamic extremists and terrorists — which proved to be a self-fulfilling prophecy.

A number of Uighur terrorist attacks were reported. On March 1, 2014, a mass knifing attack at the Kunming-Yunnan railway station left 35 dead and more than 140 injured. In February 2017, eight people were killed by three knife-wielding assailants in Pishan county, Xinjiang, an area dubbed by Chinese estate media as a “hotbed for terrorism.”

As in Xinjiang, Beijing is refusing to engage in dialogue aimed at seeking solutions to the six months of social unrest.

Instead, the mass protests in Hong Kong have been dismissed by the authorities as the irresponsible actions of a minority of violent rioters. Chief Executive Carrie Lam complained over the holiday season that rioters had “ruined Christmas.”

She made no mention of the fact that, when some 2.94 million Hong Kong citizens voted in last month’s district elections, they overwhelmingly rejected pro-Beijing candidates. Instead, Hong Kong’s people chose pro-democracy candidates to run 18 out of 19 local councils. There was a brief hiatus in the protests as people waited expectantly for Lam’s government to make some sort of constructive or conciliatory response to the voice of the people — but there was none.

Instead, the authorities are attempting to classify the acts of radical protesters as terrorism — knowing that, as in Xinjiang, dissent can then be brutally snuffed out with impunity.

Last week, Hong Kong police reported the discovery of bombs and automatic weapons that they claim were to be used during recent anti-government protests. Pro-Beijing media picked up on the theme of terrorism with noticeable enthusiasm, though the evidence was hardly convincing.

“We’re not telling people that a terrorist attack will happen, but we want to point out that it could,” Tsang Chung-bun, assistant district commander for Yau Tsim district, Kowloon West Regional Headquarters told the CCP-owned newspaper, China Daily.

The modus operandi of forced homogenization and demonization of dissent seems torn from the same authoritarian playbook that the national government is implementing in western China. Contrary to the hopes of the authorities in Beijing, this strategy seems only to be throwing oil on the flames, threatening the very political and social harmony the CCP so cherishes.