Before Ralph Buehler left Germany for a year abroad at Rutgers University in the early 2000s, people told him “No, no, you can’t ride your bike there.” But he didn’t believe them. Then he arrived in suburban New Jersey and reality set in.

With no car and only an unreliable public transportation system to get around, Buehler had some hard lessons to learn about highway-loving America.

Today, as an associate professor at Virginia Tech and chair of the university’s Urban Affairs and Planning program, he is teaching a new generation of Americans how to make their country more bike-friendly. That would not only address congestion, but, most importantly, also result in a substantial reduction of greenhouse gas emissions.

According to the EPA, in 2017, 29 percent of greenhouse gas emissions in the US came from the transportation sector. Fifty-nine percent of that number came from light-duty vehicles — regular cars.

According to Susan Handy — who studies transportation, land use, and strategies for reducing automobile dependence at the University of California, Davis — integrating cycling into mass transportation has the potential to bring that number down.

There is no doubt that a dynamic bike culture is growing in the United States. According to the League of American Bicyclists, the United States saw a 43 percent growth in bicycle commuting from 2000 to 2017. However, bike use in the US pales compared to that in Europe.

United States census data shows that between 2008 and 2012, an average of approximately 1.1 million people commuted by bicycle, which is about .36 percent of the 2012 US population.

Of all the capital cities in the European Union, only Ankara, Turkey, recorded less than 1 percent of citizens commuting to work via bicycle. In Copenhagen, Denmark, and Amsterdam, Netherlands, more than half of respondents polled by Eurostat stated that they commute to work via bicycle. In Ljubljana, Slovenia, and Berlin, Germany, that number was 25 percent. When Buehler lived in Germany, he drove for some trips, but he also rode his bike, used public transportation, and walked to complete day-to-day tasks.

Research by the European Cyclists’ Federation says that cycling has a plethora of benefits, including reducing carbon emissions; decreasing sick days, obesity, and stress; and increasing fitness, life expectancy, and self confidence. Still, it seems America hasn’t caught on.

“Cycling is a pretty incredible mode of transportation in that it’s by far the most energy efficient and also very cheap,” Handy told WhoWhatWhy. If the US could just shift even a reasonably small share of trips from cars to bikes, it could have a positive impact on the world, she explains. It could reduce greenhouse gas emissions, travel costs, and wear and tear on roads — while also improving public health and mental health. 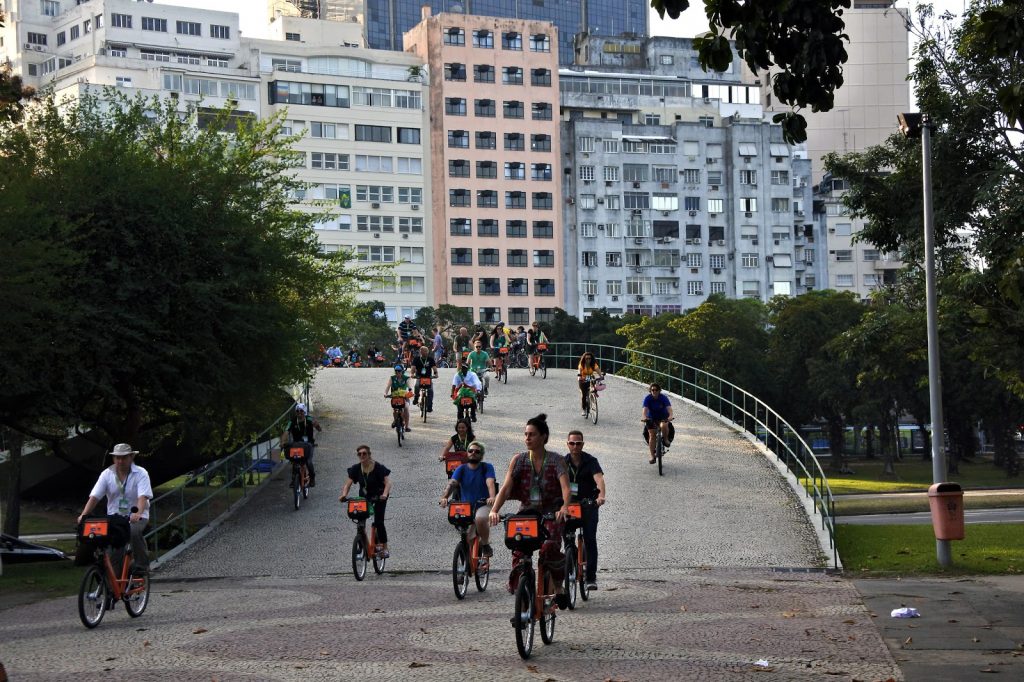 Prior to the twentieth century, the radius of the average city was no more than two to three miles, explains Elliott Sclar, director of the Center for Sustainable Urban Development at Columbia University’s Earth Institute. European and older American cities that evolved pre-motorization were designed for horse and carriages, walking, and cycling. These older cities lend themselves more easily to cycling use.

The mass production of cars changed the way cities were designed. Mark Stevenson, a professor of urban transport and public health at the University of Melbourne in Australia, points out that because commercialization of the motor vehicle took place in the US, the infrastructure and design of American cities rose around the needs of the automobile.

This explains the issue Buehler discovered when he arrived in New Jersey.

“There were no options,” he told WhoWhatWhy. Buehler got someone from the student dorm to give him a ride to Walmart, because that’s where the cheapest bikes were. He bought a bike and rode back from Walmart.

“That was not a good idea — to bike back from Walmart in suburban New Jersey,” he said. “I was on the shoulder if there was a shoulder or else I would try to get into the traffic on the freeway.”

After World War II, everyone promoted cars, both in Europe and the United States, explained Buehler. However, in the 1960s and 1970s, countries in Europe began moving in a different direction and shifted to multimodal transport.

In the Netherlands — a well-known promised land for cyclists — congestion, traffic fatalities, and the oil crisis of 1973 sparked a movement for safer cities and safer cycling. According to Handy, urban planning policies started to consider bicycles, pedestrians, and public transport systems in addition to cars, which put in place some conscious policies.

Meantime, over in the US, the federal government passed the Interstate Highway Act. Through its federal highway fund, it would put up 90 percent of the cost of building highways, and states only had to contribute 10 percent.

“Congressmen in cities wanted a part of that 90 percent,” said Buehler. In the US, he explained, it was really the federal government that paid for interstate highways in cities. “The car was the future and the way to go.” 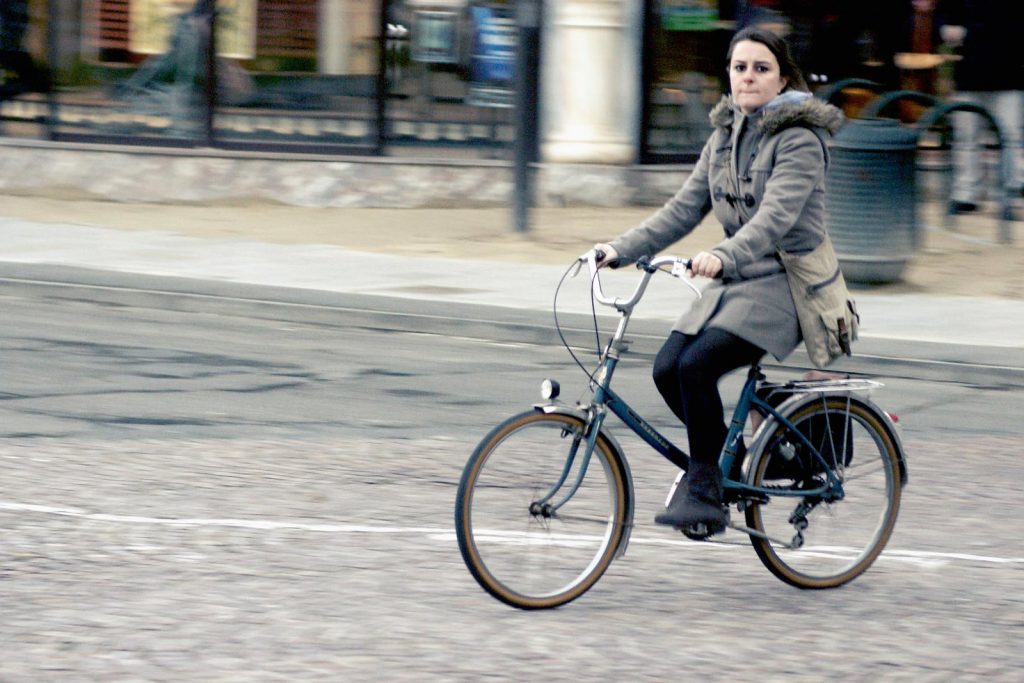 “In the middle of the century in the United States, planners were retrofitting the older cities for the automobile,” said Sclar. “Energy was cheap and the notion that there would be environmental costs was almost non-existent.”

But now we know that this development came at a steep price. According to the European Cycling Federation, passenger cars emit 271 grams of CO2 per passenger, per kilometer. For comparison, cycling produces 21 grams of CO2 per kilometer cycled. This includes emissions from manufacturing the bike, maintenance, and the fuel (in the form of food) the cyclist will need to replenish calories burned.

Cities that developed after the advent of the car, like many in the US, are in a different situation than those that developed pre-motorization, explained Sclar.

“All those cities that really grew in the South and Southwest in the second part of the 20th century were built around the assumption of cars and highways,” he said. “They sprawl out.”

In the southern states, with massive urban sprawl, it’s unrealistic to think bicycles could be the sole means of transportation. To successfully implement cycling, Stevenson explained, cities need a level of urban density. “We need to get the recipe right,” he says.

Buehler thinks that recipe is a combination of walking, cycling, and public transportation. “There has to be a patchwork of different modes,” he said.

In addition to environmental benefits, a combination of these modes provides equity and accessibility.

“If you want a viable urban society, you have to get access for everybody,” said Gifford. “The rich, the poor, the young, the old, the disabled, the abled.”

“Cities are driven by means of access,” added Sclar. However, most parts of the country don’t promote cycling, and the pressure on politicians to do so is modest at best. In cities like Washington, DC, there are a lot of car-centric opinions and policies, and, as a result, constituents are car-focused.

For example, the US has had very strict regulations on minimum parking standards, explains Buehler. If you have a building in the United States, you have to provide a certain amount of parking spaces, creating an incentive to drive.

“You have to make cycling more attractive and driving less attractive,” he said. Up until recently, the US has done just the opposite.

“We haven’t designed roads to accommodate bicyclists and we haven’t provided facilities where most bikers will feel safe,” said Handy. In many communities in the US, biking does not feel like a safe way to get around, because the country does not have an expansive system of protected bike lanes similar to what exists in Europe.

“It takes a long time before you have a real network of facilities, not just a bike lane here and there,” she added, explaining that what we really need is an interconnected network where people feel safe getting from where they are to where they need to be going. According to Buehler, one obstacle to this is that, due to American zoning laws, where people need to go tends to be very far from where they are.

It wasn’t always like that, and European cities had to evolve to become more bike-friendly.

“It’s just the way they decided to do things and they happened to turn out very favorably for cycling and for accessibility,” said Stevenson. “That’s the legacy of their design.”

The legacy in the US, on the other hand, is one of suburbia, exclusive zoning, urban sprawl, and a massive highway system which connects the nation. Until that changes, cars will remain a major source of congestion and pollution in American cities — to the detriment of the people who live in them.

One response to “Cycling in America: Stuck in First Gear”