The term “Deep State” was popularized in John le Carré spy novel, Delicate Truth. It is an expression bandied about so frequently these days that it’s in danger of losing its meaning and becoming just another empty buzzword. Which would be dangerous, because there is a real, non-fictional Deep State, and it’s important that we come to understand what it is.

One of the more mature and sober descriptions of what the Deep State is, and what it does, came from former GOP congressional staffer Mike Lofgren in a discussion, back in 2014, “The Deep State: Hiding in Plain Sight,” with Bill Moyers. Lofgren spent 28 years working on the Senate and House budget committees. He described the Deep State as “a hybrid of corporate America and the national security state.” It is a place, says Moyers, “where elected and unelected figures collude to protect and serve powerful vested interests.”

“We’re having a situation where the Deep State is essentially out of control,” Lofgren tells Moyers. “It’s unconstrained. Since 9/11 we have built the equivalent of three Pentagons around the DC metropolitan area, holding defense contractors, intelligence contractors, and government civilians involved in the military-industrial complex [MIC].” Ostensibly, they all work together to keep America safe under the emotional rubric of “Never Again.”

But there’s more. The Deep State has literally declared the Internet a battlefield. There’s no democracy on a battlefield. To help keep the internet safe from perceived enemies, the MIC — or Deep State — has contracted with corporations such as Amazon, Google, and Facebook to police the cybersphere by gathering information on each and every human online and sharing it with the government. Thus, the Deep State spends a lot of time searching for and stalking the alleged spies and traitors amongst us, while the corporations are given the green light to exploit and play with our deepest desires. In short, the Deep State is at war with privacy. We are the last frontier.

In “Anatomy of the Deep State,” a follow-up essay to the Moyers interview, Lofgren writes, “That the secret and unaccountable Deep State floats freely above the gridlock between both ends of Pennsylvania Avenue is the paradox of American government in the 21st century: drone strikes, data mining, secret prisons and Panopticon-like control on the one hand; and on the other, the ordinary, visible parliamentary institutions of self-government declining to the status of a banana republic amid the gradual collapse of public infrastructure.”

I thought of Moyers and Lofgren’s discussion as I reconsidered “Homo Contractus,” perhaps the most important chapter of Edward Snowden’s recently released memoir, Permanent Record. Snowden, the whistleblowing repentant Deep Stater, expands on and clarifies the inherent corruption and darkness of Deep State doings, and paints an inescapable picture of a dystopian nightmare underway. 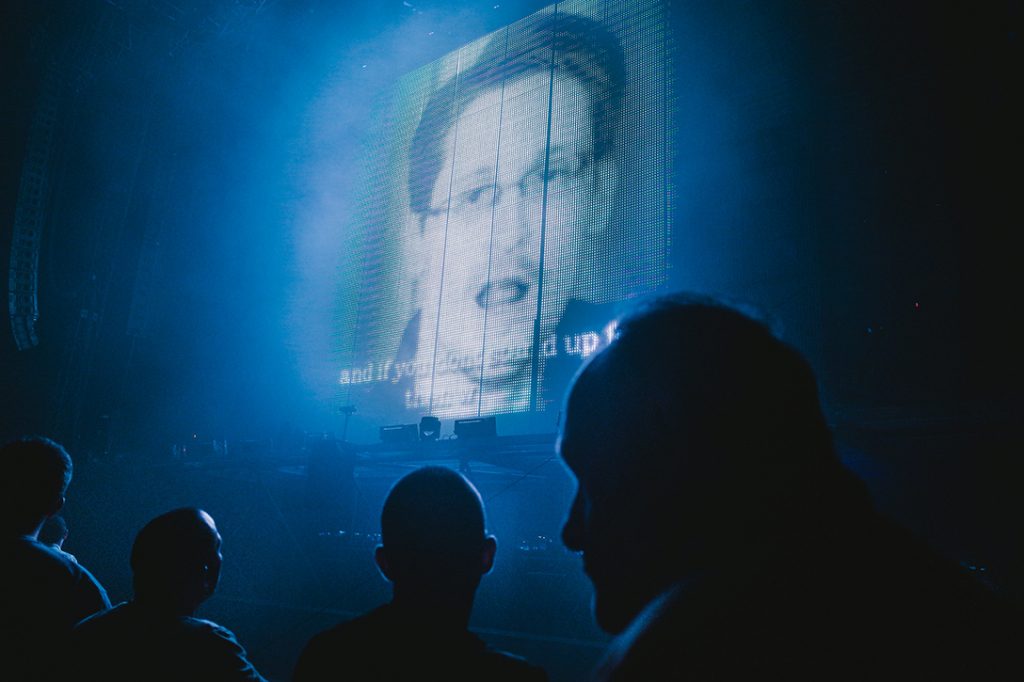 Gone are the days of public service, of wanting to be a shiny, unhailed cog in the machinery of American Exceptionalism — flaws and all — such as Snowden’s father and grandfather had gladly been. “I had hoped to serve my country,” writes Snowden, “but instead I went to work for it. This is not a trivial distinction.”

Moyers and Lofgren provide us with an abstract overview of the situation, but Snowden brings the nuts and bolts. To get around congressional hiring limits, Deep State agencies hire private contractors who are off the books — no real public accountability for deeds, and, in most cases, we don’t even know who they are. Lofgren has estimated, “There are now 854,000 contract personnel [as of 2014] with top-secret clearances — a number greater than that of top-secret-cleared civilian employees of the government.” They are virtually a whole sub-species of worker that Snowden refers to as “Homo contractus.” They run the surveillance state show — some of them looking for enemies of the state, and others on the lookout for enemies of Deep State doings. In the war zone, they call the shots without any input from the public.

Members of Congress go along with this arrangement, says Snowden, because “[Deep State] directors and congresspeople are rewarded, after they retire from office, by being given high- paying positions and consultancies with the very companies they’ve just enriched. From the vantage of the corporate boardroom, contracting functions as governmentally assisted corruption.” Private companies wait for public servants to obtain top security clearances, then they poach them through job fairs, where public servants are offered huge salary increases doing the same job for a private company — and, as Lofgren’s statistic indicates, many are jumping the ship of state to go yachting with the corporates.

Take Snowden, who was hired at such a fair by a BAE Systems sub-shell company called COMSO (Snowden never learned what the acronym stood for). At the interview he negotiated his salary up, at the recruiter’s insistence, because a 3–5 percent kick-back to the recruiter, from the government, made it worthwhile. He went from $30K to $60K in the negotiation play. Says Snowden, “Bumping up salaries was in everyone’s interest — everyone’s, that is, except the taxpayer’s.” He was a contractor, but he was doing the same work as a public servant. Later in his career he was hired by Dell computers, then Booz Allen Hamilton, each time merely switching business cards while working at CIA headquarters for the CIA, a Homo contractus spook among the spooks. No public accountability.

Snowden says Homo contractus brings with it a different kind of energy — something “sinister.” Not governed by a sense of public service, a certain arrogance and elitism become the filters of their deeds. The military-industrial complex is bound together in a negative agreement — Homo contractus hiring is a skirting of the law, and a profit-making arrangement. Contractors, says Snowden, often see their work as “inherently apolitical, because they’re based on data, whose prerogatives are regarded as preferable to the chaotic whims of the common citizen.” In other words, they know better than democracy.

“That can be intoxicating, at least for a teetotaler like me,” Snowden adds. “Also, all of a sudden you have not just the license but the obligation to lie, conceal, dissemble, and dissimulate.”

Out of this comes governmental policies that push and sustain the interests — not of the commonweal — but of the parallel government that exists between private players and the Deep State. The net result is a revolving door between the ever-expanding intelligence community and private companies, each sharing in the spoils of the public purse. So, we read of DARPA directors jumping to Google, and Google’s work with drones for the Pentagon. Amazon ends up devising web services for the CIA, and Jeff Bezos’s other project, the Washington Post, becomes the conduit of choice for anonymous intelligence agency leaks. We discover that Facebook sells the information of its users to private firms, and experiments with human emotions that may have relevance to intelligence agencies.

It can get even more sinister. If the Deep State wants to go to war, without public approval, and for profit motives, it can use its technology to spy on individuals to uncover compromat, such as what the Bush administration ordered in 2003, just before the invasion of Iraq, when it tried to dig up dirt on UN Security Council members to strong-arm them into voting for war. When these dirty deeds were leaked, the US went to war anyway — backed only by phony WMD claims. Hundreds of thousands of casualties have ensued.

Meanwhile the testimony that Kevin Mandia of Mandiant gave before a congressional subcommittee on intelligence back in 2011 was double-take stuff:

The majority of threat intelligence is currently in the hands of the government. Indeed, more than 90 percent of the breaches MANDIANT responds to are first detected by the government, not the victim companies. That means that 9 in every 10 companies we assist had no idea they had been compromised until the government notified them.

But it gets better. Mandia has reported in the past an incident where he slid a folder across the desk of a skeptical corporate executive (he was confident in his company’s security integrity) and the exec is described as being shocked to find in the folder deep secrets of the company. Mandiant was hired.

Mandiant’s Kevin Mandia cut  his cyberteeth at the Pentagon as an intelligence officer. After fumbling around for a few years, including a stint at ManTech — a cybersecurity company full of ex-spooks — he and his Mandiant associates are said to have solved the puzzle of the New York Times and Washington Post breaches in 2014, which ended in the indictment of a cadre of soldiers from China — America’s preferred enemy at the time. Mandiant got famous overnight and one thing led to another, until Mandia found himself being bought out by cybersecurity company FireEye, a CIA-funded startup, for a billion bucks. Mandia was made FireEye’s chief operating officer.

Again, this highlights the opacity that masks Deep State doings when it employs Homo contractus. We don’t know what they get up to, although “they” are on the public dollar, at least indirectly. Mandiant, like CrowdStrike, was responsible for evaluating the server breach at the Democratic National Committee (DNC) in 2016. As Mandia has already acknowledged, he has in the past received insider information, from the government, regarding breaches at corporations. One wonders whether CrowdStrike or Mandiant, or any other cybersecurity contractor, received a tip-off regarding the DNC breach, and that’s why it was never forensically examined — although that didn’t stop an “opinion of cause” being issued by three intelligence heads, leading to the mainstream media’s alleged under-critical acceptance of Russian hacking.

Further, as if we need more worry, such a Homo contractus arrangement with the Deep State, already undemocratic, appears to be metastasising overseas. The CIA and NSA are helping repressive regimes, like Saudi Arabia and the UAE, build their own state-of-the-art surveillance regimes, and watch indifferently when these tyrants with too much fossil fuel  money use the technology to spy on “enemies,” including dissidents.

Already, there has been cause for alarm, as companies like DeepMatter, employing ship-jumping analysts from the NSA, go after American dissidents and journalists too. The NSA and CIA are virtually beyond law in these countries. What they couldn’t get away with in America, they can do with impunity in Saudi Arabia and the UAE. Even Google’s work with Dragonfly, a project designed to give China a search engine devoid of human-rights queries, suggests we are now in the business of exporting panopticon products.

As Lofgren told Moyers a few years ago, the Deep State is “the red thread that runs through the history of the last three decades. It is how we had deregulation, financialization of the economy, the Wall Street bust, the erosion or our civil liberties and perpetual war.” We’ve been warned now for a few years by the likes of Moyers, Snowden, and others. None of them are naive conspiracy theorists. Snowden certainly believes we have entered into dystopia territory.

3 responses to “Who Is ‘Homo Contractus’? Edward Snowden on the Deep State”