Two Republican senators have conceded that they were eager to oust the same special prosecutor in Ukraine that then-Vice President Joe Biden wanted to see replaced. But both remain defenders of President Donald Trump.

That’s where the similarity ends. Sen. Rob Portman (R-OH), is the cerebral low-key Washington insider, the Dartmouth-educated lawyer who has served as director of the Office of Management and Budget and US Trade Representative in previous Republican administrations. After serving one term in the Senate, he comfortably won reelection last year. While continuing to support Trump, he is carefully parsing his words.

Sen. Ron Johnson (R-WI) is a political neophyte, having never run for elected office until 2010, when his conviction that the government was heading into bankruptcy propelled him into a Senate race, which he largely self-financed. Admired by the Tea Party, he opposed the Obama stimulus law which aimed at jump-starting the American economy. He proudly extols his credentials as a business owner at nearly every hearing he has chaired. In 2016, he barely squeaked by with a little over 50 percent of the vote.

The signatures of both Republicans can be found on a bipartisan Senate letter that appears to align with Biden’s version of events in Ukraine. Recent news reports uncovered that 2016 letter, asking then-President Petro Poroshenko to implement “urgent reforms to the Prosecutor General’s office” to help address serious problems of corruption.

The letter paralleled Biden’s efforts at the time to replace then-prosecutor Viktor Shokin, whom Ukrainian reform groups, the European Union, and the International Monetary Fund all considered unwilling to go after corrupt politicians and businessmen.

The letter recently became news because of the current scandal engulfing the Trump White House. Last month, a whistleblower’s complaint to the inspector general of the intelligence community regarding a call between Trump and the new president of Ukraine, Volodymyr Zelensky, became public.

The whistleblower alleged that, in the call, Trump had implied that nearly $400 million in aid would be released only if Zelensky was willing to investigate presidential contender Biden and his son Hunter. The White House later released a partial transcript of the conversation that seems to confirm the information in the complaint. The call raised concerns that the president was asking a foreign government to dig up dirt on a political adversary and thereby help Trump’s reelection campaign. 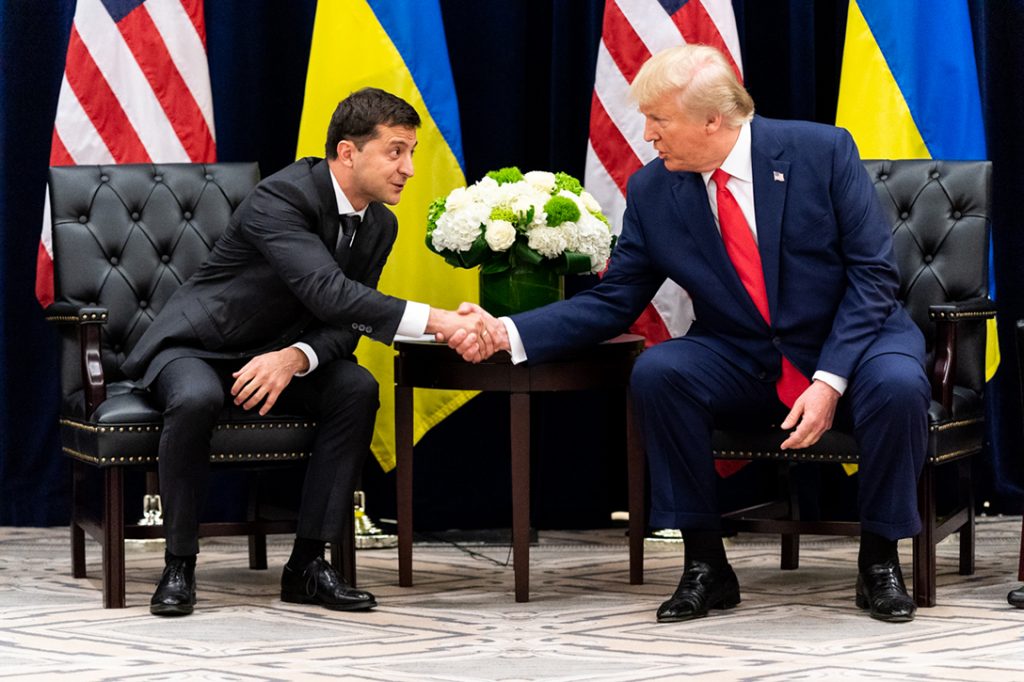 As vice president, Biden was the Obama administration’s point person on Ukraine at the same time that his son, Hunter, joined the board of a Ukrainian energy company, Burisma. The younger Biden, who has no expertise in energy matters, reportedly earned up to $50,000 a month for his services.

Biden has claimed that his anti-corruption efforts were not intended to protect Burisma, and were focused on strengthening Ukraine’s office of prosecution, not weakening it.

Portman’s reaction to the letter was cool and professional. He acknowledged the letter, and stated that, at the time, senators — and the Obama administration — believed that Shokin was not doing enough to root out corruption.

Asked about the Trump call to Zelensky, Portman trod carefully. “It’s not appropriate for a president to engage a foreign government in an investigation of a political opponent,” Portman told the Columbus Dispatch. “The president should not have raised the Biden issue on that call, period.”

Nevertheless, Portman hastened to add that Trump’s actions did not deserve impeachment and that the House acted too quickly in launching an inquiry. But he was not opposed to an investigation of the call by the Senate Intelligence Committee, he added.

In contrast, Johnson’s remarks have been all over the map, and his October 6 interview with Chuck Todd, moderator of NBC’s Meet The Press, has been derided as a meltdown.

Asked on October 3 about the bipartisan letter, Johnson initially said he did not recall signing it, implying he couldn’t be expected to remember all the “oversight” missives he signed on to.

However, in a press release issued a few hours later, Johnson implied that senators may have been misled by the Obama administration about who bore responsibility for corruption in Ukraine.

“Congress would have been subjected to the same misinformation campaign against the Ukrainian prosecutor general, perpetrated by representatives of the US government,” Johnson charged.

But in a radio interview on October 4, Johnson seemed to change his tune. “The whole world, by the way, including the Ukranian caucus … felt that this that [sic] Sholkin wasn’t doing a [good] enough job. So we were saying hey you’ve … got to rid yourself of corruption.”

On the same day, Johnson told the Wall Street Journal that EU ambassador and longtime Trump donor Gordon Sondland told him Ukraine would get its congressionally approved aid when Trump was satisfied that Ukraine was investigating “what happened in 2016.”

Johnson said that Sondland’s remarks had made him “wince. … Oh, God. I don’t want to see those two things combined.” But when he asked the president directly, Johnson declared, Trump said he would never make that kind of a linkage. It was all about corruption, not politics, he reassured the senator.

Also on October 4, Johnson told the Milwaukee Journal Sentinel that last August he sought Trump’s permission to tell Ukraine that US aid was on the way, but Trump demurred. “I was surprised by the president’s reaction and realized we had a sales job to do,” Johnson said. “I tried to convince him to give me the authority to tell President Zelensky that we were going to provide that. … I didn’t succeed.”

On October 6, NBC’s Todd asked Johnson what had made him “wince” when he talked to Sondland, but by this time Johnson was having none of it.

He launched into his own attack on “biased” media, refusing even to confirm whether he believed that Russia had actually interfered in the 2016 election. Instead, Johnson charged that the Mueller investigation and scrutiny of a CIA whistleblower complaint about Trump’s call with Zelensky were part of a conspiracy to take down the president.

Media accounts of that interview were not kind. Business Insider called it a “meltdown.” Mother Jones deemed it a “wild performance.”

Johnson, however, pleased at least one person who was watching. The president tweeted his praise.

Sleepy Eyes Chuck Todd of “Meet the Press” had a total meltdown in his interview with highly reaspected Senator @RonJohnsonWI. Seems that a not very bright Chuck just wasn’t getting the answers he was looking for in order to make me look as bad as possible. I did NOTHING wrong!