HONG KONG — Almost everything in Hong Kong has changed over the last 13 weeks, as the city has been torn apart by what is being called the “hard hat revolution.” Chief Executive Carrie Lam is now officially withdrawing the controversial extradition bill that triggered the unrest, but it’s highly unlikely everything will just return to normal overnight.

The much-criticized legislation that threatened to allow the extradition of suspects to the mainland’s Communist Party–controlled judicial system prompted the first freedom demonstrations in June, and they have grown steadily more violent as the weeks have passed.

The dramatic choreography of the protests has included tear gas, water cannons, and gasoline bombs on the streets of the city center; terrified citizens attacked on subway trains; employees sacked for attending demonstrations; families divided; shops closed; and flights canceled, amid growing fear and uncertainty.

But the protest movement is now much more substantial and far-reaching than a protest about the controversial extradition bill. Other demands include an independent inquiry into police behavior, amnesty for more than 1,000 people arrested, and democratic reforms to give Hong Kong residents universal suffrage.

“I think it’s a revolution, but we don’t know how it will end,” said schoolteacher Evelyn Mui, attending a recent mass demonstration in Yuen Long in northern Hong Kong.

Public protest and civil disobedience are part of Hong Kong’s DNA and have been a part of the political ecosystem since prior to 1997, when Hong Kong was still a British colony administered by a London-appointed governor. But this feels very different.

The violent street confrontations are highly disciplined and targeted. They do not involve looting or random vandalism, and, most unusually, there are no leaders — so asking the protesters about their strategy or ultimate objective is complicated.

“You won’t find an answer here, because we are a leaderless movement,” said Ella Wan, attending a recent demonstration in Central Hong Kong. “This may just be a peaceful rally; no one can tell.”

Beijing works hard to portray the protesters as a radical, violent minority set on the nihilistic destruction of Hong Kong, encouraged by the “black hand” of Western agitators. Chinese state media have used the term “terrorism,” a view that protesters find disingenuous, ill-informed, and aimed at a mainland Chinese audience.

“It is the Chinese government that is the terrorist organization,” Wan said. “They are the ones threatening with tanks and locking people up in concentration camps” in Xinjiang province in China’s far west — home to the Turkic, largely Muslim Uyghur minority. “There are no grounds to call us terrorists.”

Activists communicate and coordinate as a network, not a hierarchy, using popular encrypted, cloud-based messenger services like Telegram. The app is used not just for coordinating action; it also allows supporters to deliver supplies to the front line and to offer their apartments as refuges or their private cars as getaway or rescue vehicles.

The only known strategy for the protest movement is to act “like water.” The movement’s slogan, shouted in Cantonese from every march and demonstration, is “revolution of our times” or “revolution now,” though little appears to be pre-planned.

“Every time I come out, I don’t know what they are doing or where it might end,” said Kathryn Chan, who, when not protesting, is a marketing executive in the food and beverage industry.

Both the Stars and Stripes and the British flag can be seen being waved at most protests. The flags represent democracy and Western liberal values that Hong Kong people cherish, maybe even more than many Americans and Britons do. It’s also an attempt to internationalize the dispute and infuriate Beijing, which resents Western meddling. 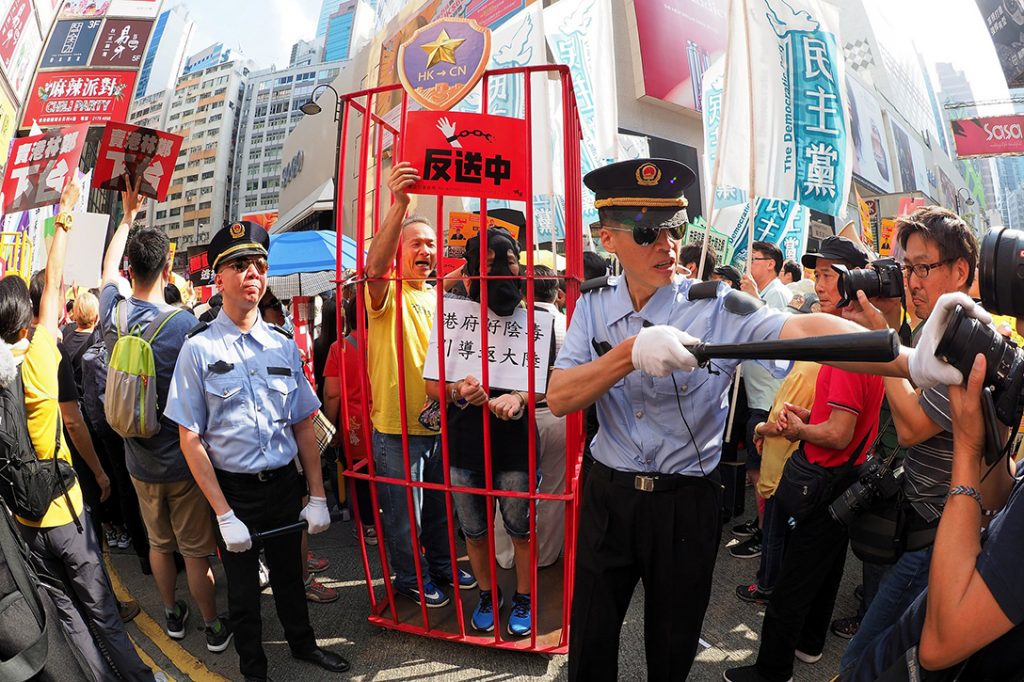 Political performance artist Kacey Wong, dressed as a mainland Chinese prison guard, was among the participants in a rally against the China extradition bill on April 28, 2019. Photo credit: etan liam / Flickr (CC BY-ND 2.0)

“We are calling for international help from Britain and the USA because we definitely need their help,” said activist and writer Raine Wang.

Protesters like her say this is their “last stand” to protect core freedoms and tell Beijing that “if we burn, you burn, too.”

Most of the protesters are idealistic and grimly determined to defend the liberal values and the identity of their city from what they see as encroachment by the totalitarian regime of China. Those seen in the violent clashes with riot police are mostly young, but the protesters overall include people of all ages, genders, and social groups. At their peak, the protests have, according to Civil Human Rights Front, attracted up to two million people — almost a third of the entire population of the territory — all willing to sacrifice their precious weekends to demonstrate in the sweltering summer heat.

This is a mass rejection of Beijing’s management and governance of Hong Kong and a demand to protect the freedoms guaranteed in the Sino-British joint declaration of 1984, which mapped out the future of Hong Kong after its return to China. This created the “one country, two systems” arrangement where Hong Kong enjoys a high degree of autonomy as compared to the mainland under the People’s Republic of China.

If there is a broader strategy emerging, it seems to be: generating international media attention and targeting the local economy.

Hong Kong is a major international financial center, where money talks louder than politics. Clearly, the economic impact of the protests is hurting the powerful oligarchy of vested corporate interests that controls the economy. Tourism numbers are down and property prices are wobbling. Full-page advertisements, issued by tycoons and corporations, have started to appear in local newspapers, condemning violence and calling for calm.

Economics may hold the key to the future. Many protesters believe that Beijing still needs Hong Kong’s international business connections, and some believe this is where the elite of the Chinese Communist Party conceal their private wealth. Beijing may not care about democracy or civil rights, but the mainland government will seek to avoid anything that might disrupt the Chinese economy, especially in the middle of a painful trade war with the US.

Even those who are not admirers of US President Donald Trump’s foreign policy will concede that he did Hong Kong’s pro-democracy movement some good by linking the protests to the current trade negotiations, however tenuously.

While it was almost certainly the economic damage caused by the protests that forced Lam into a concession, the decision must have been sanctioned by Beijing, suggesting they are feeling the effects too.

A political solution now looks more probable. But on its own, the withdrawal of the hated bill is very unlikely to quell the unrest.