One of the most controversial subjects under the sun is the dynamic between Israel and the Palestinians. There are many sides to this complex issue, and to help understand it better, we have chosen two short films that help explain it — mostly from the viewpoint of the Palestinians.

The videos show different aspects of the same tragic situation, innocent people on both sides being hurt in different ways every day — and for what?

The answer lies in the deep layers of grievances, perceptions, and opposing versions of history that serve as an infinite source of kindling, just waiting for the next spark.

The films we present show mostly the top layer, but they will give you a feel for what the atmosphere is really like. And although the first film — “Are Renegade Jewish Settlers Ruining the Two State Solution?” — was made in 2012, it shows something timeless, mysterious, and awful: how likable, seemingly rational people can have the most dangerous ideas.

The film was made by Simon Ostrovsky, winner of the 2016 DuPont Columbia University Award for Journalism. He is known for his coverage of the 2014 crisis in Ukraine for VICE News, and for “Selfie Soldiers,” an investigation he says he “carried out over several months in 2015 tracking a careless Russian soldier who was fighting in Ukraine and posting selfies in his spare time.” (Russia denies it ever sent any troops to Ukraine.)

Ostrovsky explained his interest in the West Bank — which was to be the future Palestinian state: “I wanted to find out who the settlers were, and what motivated them to pick up sticks and cross the Green Line to become the most notorious squatters the world has ever known.”

One settler, a man from South Africa, told him that he saw no reason why Palestinians should object to a Jewish presence in the West Bank. He claimed that Jews had been in the area for 5,000 years, whereas the Palestinians were only there as exiles from Israel for no more than two generations. Ostrovsky did not argue with him, but explained to the viewer:

This was an incredible fabrication… The notion that Palestinians had only lived on this land for two generations was totally false. But the idea that Jews had a historic claim to the West Bank‘s territories that trumped any Palestinian claims was one I hear over and over in the next few days and it turned out to be a major part of the settler ideology that ran directly counter to the two-state solution plan.

Another settler tells him,

Another example of why, to Ostrovsky, the situation may be hopeless. Yet the film is somehow upbeat. 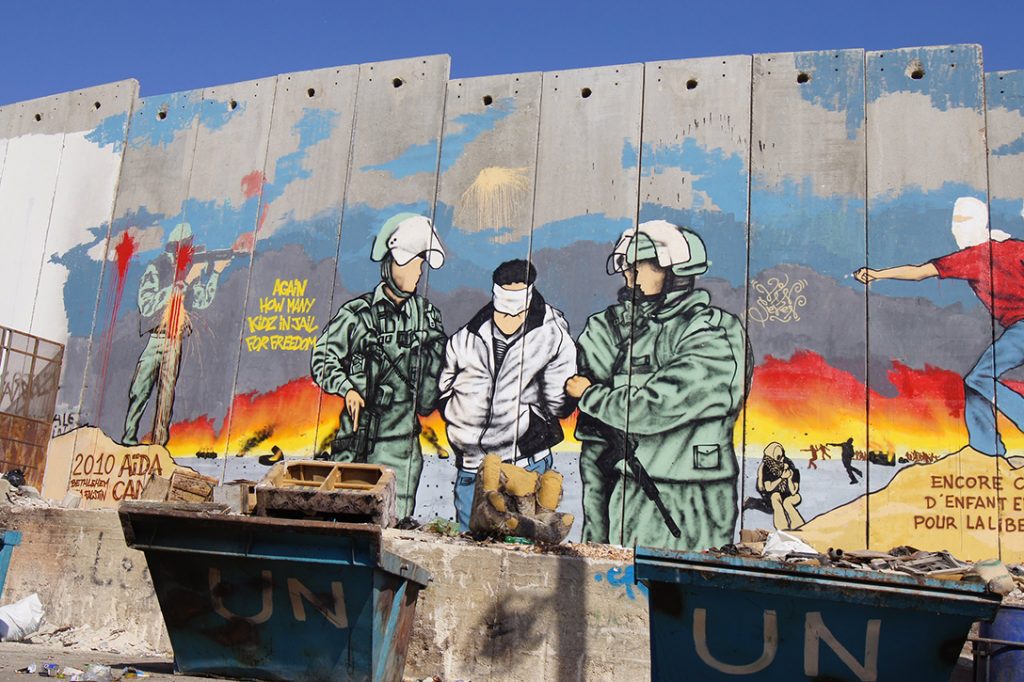 Our second film “The Jewish Mothers Out to Stop Harassment of Palestinians” should restore your faith in people if you ever lost it. Courageous women, who call themselves “Machsom Watch,” monitor, and then report on, the way Israeli soldiers and police treat Palestinians at various checkpoints and borders.

And they do much more. Under the noses of the authorities, these women give comforting words, information on rights, food, water, and other small kindnesses, to those subjected to abuse by the authorities, such as three young men forced to stand in the heat, handcuffed and blindfolded, supposedly while their identities were being checked.

When night fell, one of the women discovered they were still being forced to stand. She made inquiries, and the bored guard said to her, “Go away and we’ll let them go.” He then roughly removed the handcuffs, releasing them finally — after nine hours — with no explanation for why they were detained. What would have happened had this Jewish woman not intervened?

One of the mothers explains their ultimate power:

Our strength is in our weakness. We come unguarded. We offer trust. We offer belief in people. We offer some kind of innocence. We want to bring it back to these tormented areas.

The Jewish Mothers Out to Stop Harassment of Palestinians (10:51)

3 responses to “Israel: Settlers and the Two-State Solution”