Media attention has recently focused on a limited number of wealthy parents who schemed and spent hundreds of thousands of dollars to get their kids into elite colleges for which they ordinarily would not qualify. But then there is the reality for everyone else.

A new study shows that most parents are making personal sacrifices to ensure that their children get a decent — and honestly earned — education in a time of soaring tuition costs. Those sacrifices include shedding hobbies and “me time” and taking on multiple jobs in order to foot the bill.

And after graduation, former students and their families keep on paying… and paying. Nearly a fifth of the average college graduate’s salary goes toward paying off student loans, which, on average, take 21 years to pay fully.

So what are colleges doing with the money? Some are spending more of it on attracting new students than on instructing current undergrads, according to another recent report. The Century Foundation (TCF) analyzed the spending patterns of over 5,000 colleges and universities, using 2014–15 data, to determine how much money from tuition and taxpayer support is actually spent teaching students.

The report defined instruction as money spent by the schools to pay teachers, and to acquire resources for coursework.

“Public institutions receive tuition dollars and they also receive federal, state or local subsidies, and so they do tend to spend a higher amount per student on instruction,” Stephanie Hall, a fellow at The Century Foundation and the author of the report, told WhoWhatWhy.

“They have large resources on top of the tuition dollars,” she said. Public institutions nationally spend an average of $1.13 per student on instruction for every dollar a student pays in tuition.

“Large online institutions of all types are also spending suspiciously lower amounts on instruction and I think this is something worth further investigation and further research,” said Hall. “It appears those online schools might be able to actually lower their tuition price for students, which will be my suggestion for a lot of them.”

The report states that online schools could lower their tuition because they don’t have the same expenditures as colleges with campuses. They rely more on adjunct professors than on full-time faculty, which means lower outlay for employee benefits. 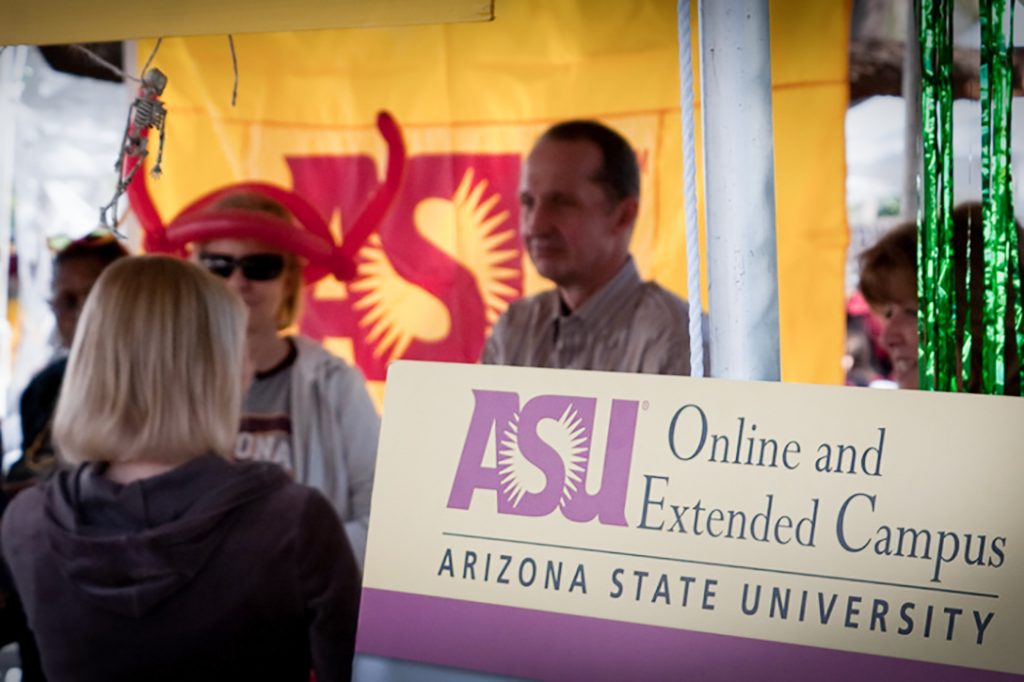 Private for-profit and online schools spent the most on advertising and recruitment compared to public and private nonprofit institutions, the report found.

For-profit and online colleges dominated the top 10 list of schools that invested heavily in paid search advertising. The University of Phoenix spent $27 million from August 2016 to January 2017, making it the school that spent the most money on online ads. Next in line were Capella University, which is both a for-profit and online institution and which spent almost $14 million on online searches, and DeVry University, which spent $13,500,000.

To be sure, marketing expenses go beyond online ads. According to the report, most private for-profit and online for-profit schools employ thousands of recruiters to convince interested people to immediately enroll, through some form of “early decision.”

The American Council of Trustees and Alumni (ACTA) created the website How Colleges Spend Money in order to provide trustees and the public free, easy-to-access data on how colleges and universities handle tuition money and student loans. The latest yearly data the website provides is from 2016.

Since many college and university trustees are volunteers who don’t work in higher education, they may not have enough information to provide appropriate oversight. So the purpose of the website is to make the data more transparent, said Armand Alacbay, vice president for trustee and government affairs at ACTA and the architect of the website.

“Legally, in most cases, they [Boards of Trustees] are supposed to have the ultimate authority and the ultimate responsibility for determining what colleges spend money on,” said Alacbay. “They are tasked with approving their budget … Their  responsibility is to the public and that’s a whole reason that we have trustees because they’re the one constituency on a college campus that is directly accountable to the public.”

TCF also plans to build a database to track instructional spending. In addition to calling for the creation of a a “taxpayer accountability tool,” the report suggests that federal and state lawmakers set limits on institutions’ spending levels.

“I think students should have access to this information so they know how schools spend their money,” said Hall. “I would love for students to use this information to make their college choice. I think taxpayers should be aware of how schools are handling federal funds, and I think that anyone interested in regulating the college industry should use the data to figure out how to encourage colleges to do the type of spending that supports students.”

College tuition has been increasing rapidly for the past 30 years. According to a College Board 2017 report, tuition at four-year public institutions increased by 213 percent. During the school year 1987–88, the average tuition at four-year public schools was $3,190; by 2017–18 it had risen to nearly $10,000. Of course, tuition does not include the cost of room and board for students who live on campus.

Meanwhile, college graduates under the age of 35 spend nearly one-fifth of their income to pay off student loans, and most of them expect to be making loan payments until they are 40, according to Citizens Bank research.

The upsurge in college costs and subsequent debt has prompted parents to start investing in the education of their children before they embark on their educational careers. According to the HSBC Value of Education Report, seven in 10 parents say they have come up with plans for their children’s educations and 60 percent have started to save money before their offspring begin primary school.

To ensure that their children have a well-established future, 87 percent of parents said that they are willing to make sacrifices. Nearly one in four parents completely gave up their hobbies while 17 percent cut down or stopped spending money on vacation and on “me-time.”