George W. Bush delivered a eulogy for his father, the 41st president of the United States, George H. W. Bush. OK, not unusual. But someone else did too: Jon Meacham, the former editor of Newsweek, a major US news organization. That’s more unusual.

Meacham, who at one point ran an ostensibly hard-hitting magazine, went on to write a biography of the elder Bush so fawning and uncritical that he became like family for the Bushes. And then he delivered the tribute.

In an era of “fake news” and accusations that the media is biased, this is a bridge too far.

Yet hardly any media —none?— even noted the conflict of interest. And why should they? The vast majority of news organizations abdicated their roles as honest brokers for “Bush Week,” rushing to outdo each other in gushing with exaggerated and ill-founded praise for a former president once criticized for a broad range of transgressions — legal, moral, and otherwise.

When anyone stepped out of line from the uniform genuflection, they got slapped down. The Daily Beast went after a TV show for daring to air differing opinions:

If there was one thing it seemed most Americans could agree on this weekend, it was that former President George H.W. Bush was generally a good man who had the country’s best interest at heart. And yet, somehow, the hosts of The View still found a way to turn his tribute into an argument.

Why the assumption that journalists must hold their fire when a president dies? Of course we know that in this instance, some of it has to do with the striking contrast between Mr. Bush’s style compared to President Donald Trump’s. In addition, Bush’s death allowed the corporate media — which is often criticized for being biased in favor of liberals — to demonstrate that it is capable of celebrating conservatives.

But in skipping the meat of the story, the media did the public a grievous disservice. Instead of laying out the facts, those favorable and not, and letting the public decide what to make of the man’s legacy, major news organizations went out of their way to narrate his departure as if he were a saint.

We understand that the media tries to make nice when a president dies. It’s also reasonable to resist taking cheap shots at somebody who has just died. We get it. But there is a big difference between attacking the person, and honestly assessing his or her life and impact. For the media to “review” Bush in an almost entirely positive light is akin to it acting like Bill Clinton never faced a scandal.

Ironically, those who criticize the frank coverage you’ve seen on WhoWhatWhy as not “tasteful” ignore one central point: they would like us to avoid candor at the apex of public interest in the man — at the very time when people may be most interested in learning the truth.

When a president dies is a perfect time — maybe the only time — for an honest reckoning via a truly national conversation.

The “first draft of history” is often all the public will ever really absorb and remember — so if it is wall-to-wall platitudes, that is what will remain for all time.

This is well understood, as is the vital importance of propaganda and spin in preserving a largely docile population, and that is why the well choreographed homilies and the aw-gee calculated shots of the goofy socks and loving comfort animal, Sully, lying before the casket.

Instead of manufactured sentimentality, we have a chance to learn and grow. But the establishment squanders that opportunity. And chastises those who do their jobs. 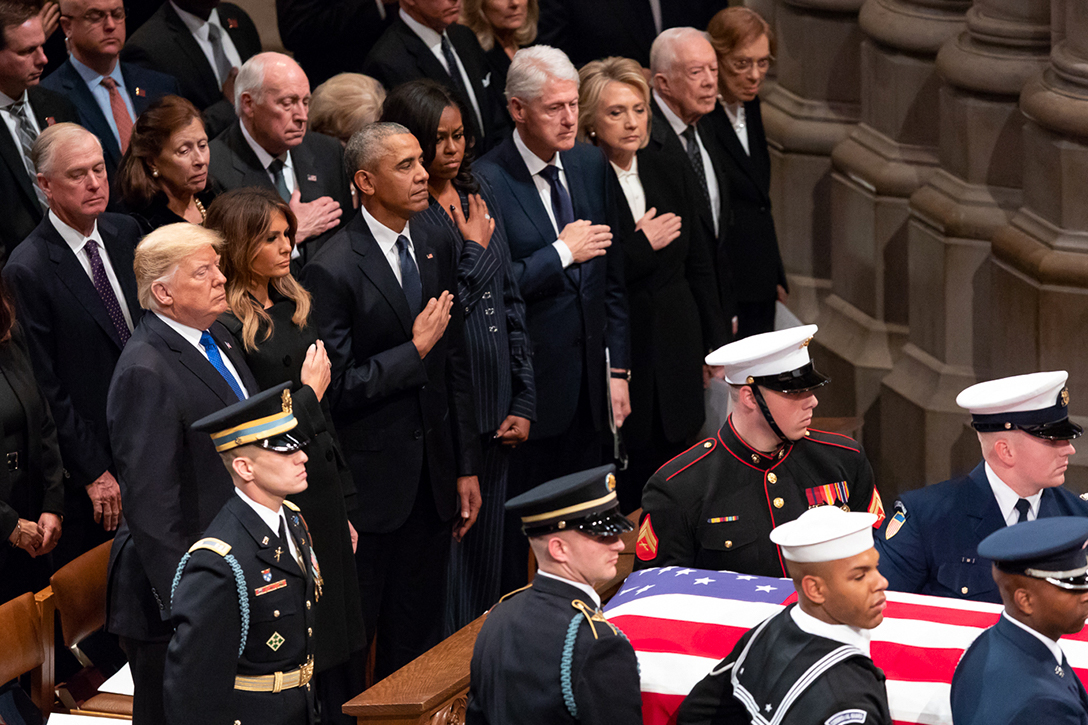 An extraordinary performance like what we just witnessed can have a salutary effect, however. It can force some self-examination, some stock taking on our essential values and standards. It raises so many questions we ought to be asking. For example:

If we believe that presidents, when they die, are deserving of universal praise and sentimentality, where do we draw the line?

What about a president who resigned in disgrace?

What about a president who launched an unnecessary war under false pretenses, resulting in the death and injury of huge numbers of innocent people? One who played a central role in a massive deception of Congress and the American people?

And if the “rule” applies only to presidents, then why? Is it that people secretly crave royalty to rule us? Or that we so badly need heroes we will endow heroism or its cousins, nobility and grace, on those who are in fact deeply flawed?

Even the British, who have royalty, can be extraordinarily blunt about their political leaders when they die. See this remarkable commentary on Margaret Thatcher by the actress Glenda Jackson, who served 23 years in Parliament.

To anyone who thinks we should not tell the truth about someone who just died because they held a high position, we reply: You are what you eat. And you are what you consume, what you listen to, what you read.

Junk of any kind isn’t good for us; neither is Junk News.

Go here to find out just how interesting George H.W. Bush really was.