We at WhoWhatWhy say that “We do not cover the news. We uncover the truth.” And of course we are referring to the secret ways of the world. But there are other secrets, the personal kind, and they have their own charm.

What is it about a secret — by definition, something you don’t know — that makes it so irresistible? It’s a black hole. A blank. Something you can only speculate about. It’s none of your business, so of course you want to know all about it. It is forbidden, so you think its discovery will be enormously entertaining or shocking or both. Preferably both.

The funny thing is, there is a reverse situation: To paraphrase Voltaire — the secret to being a bore is to tell all. Don’t leave out a single detail, no matter how dull or irrelevant! I have fantasies of the CIA’s Gina Haspel listening in to my gabby old Aunt Kate (who was very thorough when telling all), and being cured — by aversion therapy — of ever wanting to listen in again. This could become a secret weapon in the war for privacy.

In the meantime, we will continue to wonder about our fellow human beings — those who do not tell all. Here are some intriguing comments that should make the process of wondering all the more enjoyable.

Of course I can keep secrets. It’s the people I tell them to that can’t keep them. (Anthony Haden-Guest)

He that communicates his secret to another makes himself that other’s slave. (Baltasar Gracian)

A secret’s worth depends on the people from whom it must be kept. (Carlos Ruiz Zafón)

Confidante: One entrusted by A with the secrets of B confided to herself by C. (Ambrose Bierce)

He that has eyes to see and ears to hear may convince himself that no mortal can keep a secret. If his lips are silent, he chatters with his fingertips; betrayal oozes out of him at every pore. (Sigmund Freud)

The best way of keeping a secret is to pretend there isn’t one. (Margaret Atwood)

We have secrets, and we have the same secrets that criminals have. Sometimes the only difference between a criminal and a law-abiding citizen is that somebody found out the criminal’s secret.

Man is not what he thinks he is, he is what he hides. (Andre Malraux)

If we knew each other’s secrets, what comforts we should find. (John Churton Collins)

A man nearly always loves for other reasons than he thinks. A lover is apt to be as full of secrets from himself as is the object of his love from him. (Ben Hecht)

One of the things I wanted to introduce in The Same Sea beyond transcending the conflict, is the fact that deep down below, all our secrets are the same. (Amos Oz)

From infancy on, we are all spies; the shame is not this but that the secrets to be discovered are so paltry and few. (John Updike)

Most of the secrets the CIA has are about people, not machines and systems, so I didn’t feel comfortable with disclosures that I thought could endanger anyone. (Edward Snowden)

The NSA’s business is ‘information dominance,’ the use of other people’s secrets to shape events.

No one demands more caution than a spy, and when someone has the skeleton key to minds, counter him by leaving the key of caution inside, on the other side of the keyhole. (Baltasar Gracian) 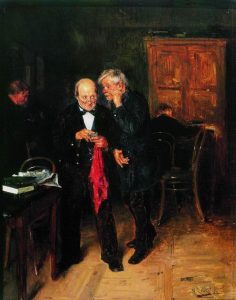 Secrets and the Government

There are some things the general public does not need to know and shouldn’t. I believe democracy flourishes when the government can take legitimate steps to keep its secrets, and when the press can decide whether to print what it knows. (Katharine Graham)

The Founding Fathers gave the free press the protection it must have to bare the secrets of government and inform the people. (Hugo Black)

We don’t have an Official Secrets Act in the United States, as other countries do. Under the First Amendment, freedom of the press, freedom of speech, and freedom of association are more important than protecting secrets. (Alan Dershowitz)

The very word ‘secrecy’ is repugnant in a free and open society; and we are as a people inherently and historically opposed to secret societies, to secret oaths, and to secret proceedings. (John Fitzgerald Kennedy)

A secret may be sometimes best kept by keeping the secret of its being a secret. It is not many years since a State secret of the greatest importance was printed without being divulged, merely by sending it to the press like any other matter, and trusting to the mechanical habits of the persons employed.  They printed it piecemeal in ignorance of what it was about. (Sir Henry Taylor)

There are some secrets which do not permit themselves to be told. Men die nightly in their beds, wringing the hands of ghostly confessors, and looking them piteously in the eyes — die with despair of heart and convulsion of throat, on account of the hideousness of mysteries which will not suffer themselves to be revealed. Now and then, alas, the conscience of man takes up a burden so heavy in horror that it can be thrown down only into the grave. And thus the essence of all crime is undivulged. (Edgar Allan Poe)