On Monday, the Supreme Court ruled in the landmark case More Voter Suppression v. Fair Democracy. OK, we made up the name. Actually, the case was called Husted v. A. Philip Randolph Institute, but the underlying issue was whether anti-democracy forces in the US would be handed yet another tool to suppress votes. Want to guess who won?

Yup, to nobody’s surprise, the Supreme Court’s conservative justices ruled in favor of more voter disenfranchisement. In this case, it’s a scheme cooked up by Ohio’s Republican Secretary of State Jon Husted that makes it easier for his state to purge voters from its rolls. So here is another question: What groups do you think this will affect disproportionately?

You guessed it: Low-income Americans, minorities, and young people, aka groups that vote for Democrats, aka people Republicans don’t want to see casting votes.

Here’s how it works: If a registered voter in Ohio does not vote in a two-year period, the Secretary of State’s office sends him or her a postcard. If the voter does not respond within 30 days, his or her voter status is changed to “inactive.” If the voter then fails to vote in the next two federal elections, he or she will be removed from the rolls.

This so-called “supplemental process” might sound reasonable to some people. After all, voters only have to show up once every six years to remain active. Or, as Husted puts it: “If this is a really important thing to you in your life, voting, you probably would have done so within a six-year period.”

Let’s set aside for a moment that there are many reasons why people may not vote for a couple of cycles and focus on the most important question: Why does this need to be done?

Husted and other vote suppressors are always quick to point to “voter fraud” as a justification for their nefarious acts. But we know that voter fraud isn’t really a problem.

Among Ohio’s nearly 8 million voters, we’re talking about a few dozen votes that have been flagged as potentially fraudulent — and in most cases it turns out they were cast by people with no malicious intent who were simply confused. The result is that hardly anybody is ever prosecuted for voter fraud.

One possible justification for a purge might be that it saves a state money. That would actually make a bit more sense. If voters moved but the state still sends them election information and sample ballots, it’s a waste of money. But, let’s be honest, we’re talking about a comparatively tiny amount here. In addition, there are already databases, for example from the US Postal Service, that can be used to track where voters move to. And, as you will see below, Ohio sends out millions of these postcards, which likely is a much greater expense.

So in the end, it comes down to this: Aren’t a few extra postcards being mailed to voters who have moved or died a small price to pay to ensure that as many eligible people as possible get to vote? 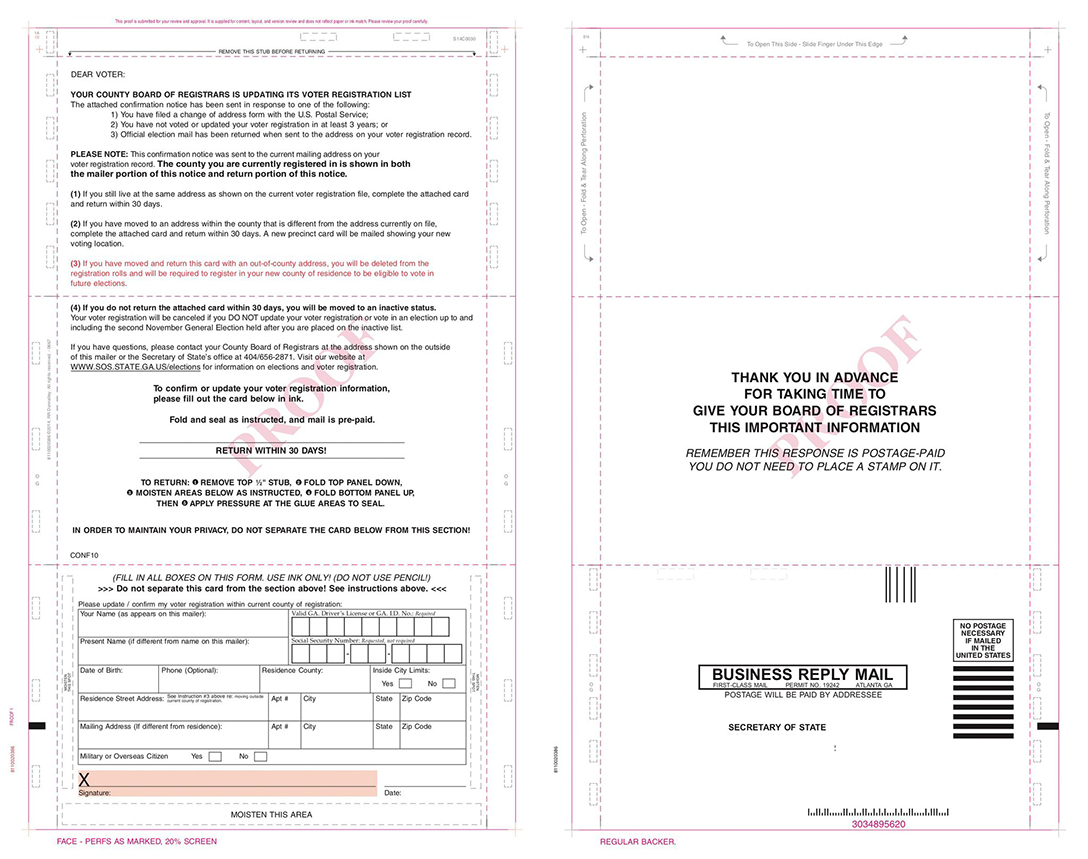 Husted and others of his ilk clearly don’t think so. To people like him, it’s not actually about the integrity of elections or the cost to taxpayers. It’s about tailoring the electorate to make sure the “right” voters vote.

It’s completely disingenuous for Husted to claim that Ohioans would vote if they thought doing so was important, while also placing obstacles in their paths.

As WhoWhatWhy has already pointed out in a previous article, there are many reasons why somebody may skip some elections. An illness, a short-notice work trip, an overseas deployment, having to juggle multiple jobs, no babysitter, or long lines. Many of these reasons affect low-income voters and minorities disproportionately. For example, minorities are six times more likely to wait an hour or more to vote than whites.

In addition, thanks to political gerrymandering, many minorities have been “packed” into their own districts, which means that they don’t have a competitive race to vote on in a midterm election that does not also feature a Senate race.

So let’s look at a completely realistic scenario to see how this supplemental process disenfranchises voters. In 2014, when voter turnout in Ohio was 40 percent, a young African American woman in a safe Democratic district decides not to vote. That is why, ahead of the 2016 presidential election, she gets one of Husted’s postcards. But it looks like junk mail, so she does not respond within 30 days and is placed in the group of “inactive” voters. That doesn’t make her an outlier. Only 20 percent of the 1.5 million postcards sent out after the 2012 election were returned.

It is also worth noting that many of the voters who tend to vote for Democrats (young, low-income) move more often and are therefore also much less likely to even receive the notification.

In 2016, she wants to vote, knowing that Ohio is an important battleground state and that no Republican has ever won the presidency without carrying the Buckeye State. But because of Husted’s reduced early voting schedule and long lines on Election Day, she never gets the chance (and, as a supporter of Bernie Sanders, she wasn’t so fond of her choices anyway).

Unbeknown to her, she now only has the upcoming midterms to vote on before being purged. Unfortunately, she gets the flu/needs to travel for work/has to take care of her sick mother/can’t get a sitter/doesn’t have time between her two jobs on Election Day — and once again does not vote.

And, just like that, she is no longer a registered voter in Ohio — and may not even be aware she was purged until she shows up to vote against President Donald Trump in 2020 and is told that she does not get to cast a ballot.

What sounds like a major flaw in Husted’s “supplemental process” is actually its sole purpose. The entire point is to disenfranchise young people, low-income voters, and minorities.

So here is one final question: Now that the Supreme Court has given the green light to this scheme, how many other Republican secretaries of state in key states do you think are currently cooking up their own voter purges right now?