Back when the existential competition between the communist USSR and the capitalist USA was reaching its fevered pitch, the CIA published a report on Communist bloc interrogation techniques — which it denounced as “police tactics which would not be condoned in a democratic country.”

The 1956 CIA study was commissioned amid Cold War hysteria surrounding reports of the Communists’ seeming ability to “brainwash” prisoners — coaxing them to “confess” to all manner of things that were untrue.

“The Communists,” the report’s authors explain, “do not look upon these assaults as ‘torture.’” Instead, interrogators, “in a typical legalistic manner,” use methods that allow them to conform to Communist theory which demands that “no force or torture be used in extracting information from prisoners.”

What were those nefarious techniques favored by the Communists? Well, they were not the waterboarding, forced rectal feeding, sexual threats, or mock burials almost universally considered torture that were deployed during the Bush-Cheney administration’s “enhanced interrogation” program.

Instead, the Communists’ “brain washing” featured some of the CIA’s milder (still terrible) interrogation techniques, including the systematic use of stress positions, “isolation, anxiety, fatigue, lack of sleep, uncomfortable temperatures, and chronic hunger” — with the ultimate goal of making the prisoner “docile and compliant,” according to the 1956 report titled: “Brainwashing: From A Psychological Viewpoint.”

The Communist interrogation regime was designed with the goal of “breaking the will” of prisoners, and to get high-profile prisoners to admit to their own guilt — regardless of actual culpability — during “show trials” and the like. 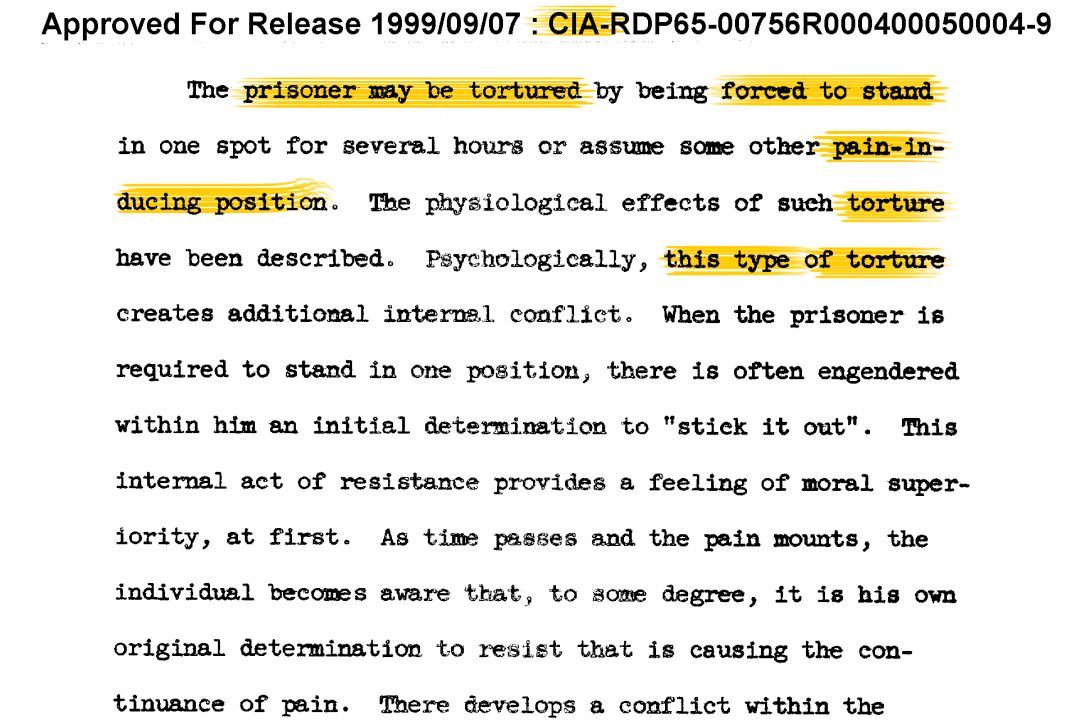 “But these [Soviet] methods do constitute torture,” the CIA’s author declares, “and physical coercion should never be considered otherwise [emphasis added].”

The stress positions described in the CIA report produce “excruciating pain.” For example, “requiring the prisoner to stand throughout the interrogation session or to maintain some other physical position.”

Circulatory failure, edema, renal failure, and “intensely painful” swelling in the lower extremities are the typical consequences of prolonged standing.

“This,” the CIA determined, “is a form of physical torture, in spite of the fact that the prisoners and MVD [which translates to Ministry of Internal Affairs] officers alike do not ordinarily perceive it as such.”

John Kiriakou, the only CIA officer related to the torture program to do time — for blowing the whistle on it — told WhoWhatWhy: “The CIA was right in the 1950s and wrong a half century later. Torture is wrong under any circumstances, whether it’s called torture, enhanced interrogation techniques, stress positions, or anything else. No civilized country should even consider such a program. The CIA knew that once upon a time.”

The CIA report was released through the Freedom of Information Act (FOIA) to the website, Muckrock, that specializes in requesting and obtaining government documents through FOIA.

Last month we wrote about the apparent disconnect between the well-understood inaccuracy of information gleaned through the use of torture and the CIA’s apparent enthusiasm to deploy the results of its dubious “intelligence” under the direction of the Bush-Cheney administration. During that time, “enhanced interrogation” was used purportedly to get to the bottom of who was responsible for the 9/11 attack and to head off any further attacks.

But a key figure in that administration, Col. Lawrence Wilkerson, then Secretary of State Colin Powell’s chief of staff, now says that a major impetus for the implementation of the torture program was to elicit the “right” kind of intelligence from terrorism suspects. Namely, that Saddam Hussein had some direct connection to Al Qaeda — which he didn’t.

If the CIA needed a refresher on the practical utility of torture, it could have searched its own files. The 1956 brainwashing report points to the obvious problems of torture during interrogation:

The minds of those who are to be interrogated for intelligence must be kept sufficiently clear and intact to permit a coherent, undistorted revelation of the desired information; whereas in brainwashing [read: torture] the initial assault is upon the clarity of the thought processes.

The report’s authors compare the interrogation techniques used by the Communists — later to be taken even further by the CIA — to the methods used by witch-hunters in Europe and the American colonies, noting the similarity to “those used for obtaining confessions of witchcraft three and four centuries ago.”

And in an insight that does not bode well for the future of American democracy, the report’s authors said this type of control of the individual and the masses obtained through torture is “little different from controls exercised by virtually all absolute forms of government, past and present.”

One response to “Internal CIA Docs: ‘Enhanced Interrogation’ Is Torture”