Last week, Congress was shocked to learn that a tiny energy company in Montana had received a $300 million no-bid contract to help restore Puerto Rico’s electric grid. The public momentarily caught sight of a system in which contractors are doing more and more of what we consider to be the government’s responsibility.

The company, Whitefish Energy Holdings, is based in the hometown of Interior Secretary Ryan Zinke, who admits knowing its chief executive officer. (Zinke’s son also worked at a Whitefish construction site one summer.) Although Whitefish investors include major Republican donors, Zinke denies that he had anything to do with approving the contract, which reportedly proposed to charge the beleaguered island high rates for its work.

How Whitefish got its contract, and who approved it, will be the subject of congressional inquiries and an investigation by the Department of Homeland Security’s Inspector General. The Governor of Puerto Rico already has nixed the deal.

But most of the time, legions of federal contractors operate in the shadows and largely escape public scrutiny. Indeed, when he was running for office, candidate Donald Trump promised to freeze the federal payroll as a way to reduce corruption. He did not train his fire on contractors.

The federal government does not even know how many contractors work for it, Light said.

That message seems to have been a winning one, empowering Trump to accomplish as president what provocateur and former White House aide Steve Bannon long has promised: the “deconstruction of the administrative state.”

Voters lament that government does not work as well as they would like, with only one in five Americans surveyed claiming to trust the federal government to do the right thing. But those who study the federal workforce challenge Trump’s assumptions. They too worry about government failures — but contend the problem does not reside with career civil servants.

The problem, New York University professor Paul Light wrote in his new study The True Size of Government, is a workforce so “large and poorly sorted that it has become a threat to the very liberty it protects.”

Consider this: There are about two million federal workers, excluding members of the military and postal employees, said Light — who also is a senior fellow with the nonpartisan government reform group, The Volcker Alliance. That total is about the same as it was during the Kennedy administration, and has held steady since 1984.

But an estimated 3.7 million workers are contract employees, Light said. Indeed, when four US soldiers were fatally shot in Niger, it was a contracting firm that reportedly assisted in the evacuation of dead and wounded soldiers — not the military.

Congress scrutinizes the federal workforce, keeps the size of that workforce in check, and holds civil service workers accountable. That same scrutiny does not apply to federal contractors. The federal government does not even know how many contractors work for it, Light said.

The existence of two workforces is “so complex that Congress and the president simply cannot know whether this blended workforce puts the right employees in the right place at the right price with the highest performance and fullest accountability,” Light asserted.

Even sharp budget cuts proposed by the president and congressional Republicans likely won’t stem the surge in contractors. The rallying cry to “deconstruct the administrative state,” he pointed out, is directed at federal employees, not contractors.

With nearly 300,000 federal workers older than 60, there will be a “tsunami” of retirements, Light predicted. Speaking at a recent press conference in Washington, he said that the decline in the number of civil servants, “will be significant.” When you reduce federal employment, Light added, “you have a flood of service contracts in government.”

The demands on federal agencies will not decrease, particularly considering expected increases in defense spending. “With a $70 billion [increase] for defense,” Light pointed out that may mean up to 150,000 defense contractors.

“Americans are deeply conflicted about the federal government,” Light said. “They want more and done better.” But the public thinks “their taxes are being wasted and government is bound to fail.”

While Light won’t criticize the burgeoning growth of contractors, Danielle Brian holds stronger views. Brian, the executive director of the nonprofit government watchdog, the Project on Government Oversight (POGO), contended that the increasing use of contractors both wastes tax dollars and invites corruption.

Federal agencies increasingly are being staffed by people who know how to manage contractors, but who lack the expertise crucial to fulfilling the missions of federal agencies and serving the public.

“There is a complete misperception that outsourcing results in greater efficiencies and cost-saving,” Brian told WhoWhatWhy. In 2011, POGO released an in-depth report comparing not only the salaries and benefits of federal workers versus contract workers, but also the total cost to the government for each type of employee. The study discovered that, in almost all cases, federal workers had better pay and benefits — but cost the government far less than contract workers.

“If you just look at salaries,” Brian said, that distinction doesn’t emerge. It is only when you factor in profits for the contracting companies and overhead, that the real cost becomes clear. “They are more expensive.”

Brain Drain, Instead of Swamp Drain

A recent case in point is the retirement of Wendy Cleland-Hamnett from her position overseeing toxic chemical regulation at the Environmental Protection Agency (EPA). Cleland-Hamnett sharply disagreed with EPA political appointee Nancy Beck’s endorsement of lower chemical safety standards. Beck went to the EPA straight from the chemical industry, a conflict of interest WhoWhatWhy reported on in July.

Worse, the revolving door in government works especially well when government employees take high-level jobs with contracting firms and then use their contacts to solicit more contracting business, Brian charged. It isn’t unusual for contracting executives to cycle in and out of government more than once, she added.

Brian offered the example of Daniel Craig, Director of Recovery at the Federal Emergency Management Agency (FEMA) in the George W. Bush administration, who took the job after a career in lobbying and political fundraising. By the summer of 2005, Craig had decided to leave FEMA, and had discussed his job opportunities with at least two companies vying for FEMA’s temporary housing business: Shaw Group and Fluor Corp. Within months of Craig’s initial job discussions, the two companies each received $500 million no-bid contracts for Hurricane Katrina recovery housing.

Unfortunately for Katrina survivors, those contractors proved unreliable. Shaw and Fluor installed and maintained trailers later found to contain high levels of toxic formaldehyde. Shaw and Fluor were among the companies that had to pay a total of $5 million in damages to victims.

Craig declined Shaw’s job offer. But after leaving FEMA he went to work for a law firm that represented government contractors looking for FEMA dollars, including Shaw. Craig ultimately went to work for a disaster preparedness and recovery consulting firm.

Craig has stated that he did not approve the Shaw contract, and that he did report his potential ethics violation to the Department of Homeland Security’s Inspector General. The IG did not find enough evidence to cite him for any conflict of interest violations — reportedly without interviewing any of the procurement staff who worked under him. According to media accounts, the IG did find that Craig had falsified travel and time records. 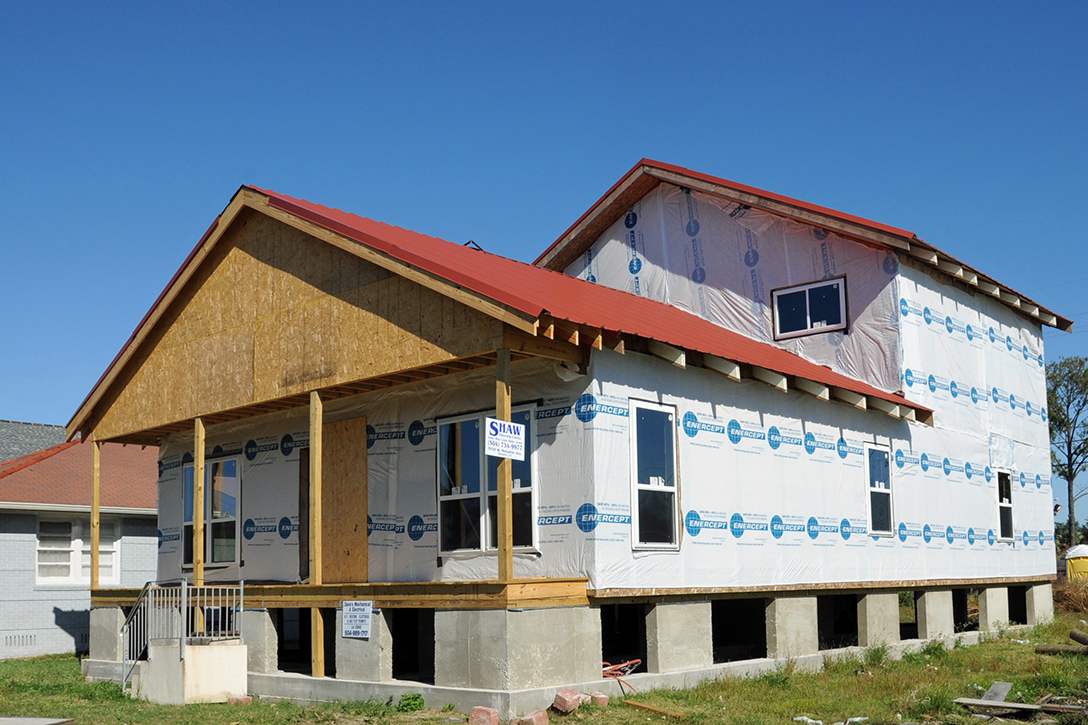 Despite his checkered history with FEMA, the Trump White House nominated Craig to be FEMA’s deputy director. He withdrew his name after reports surfaced about the IG’s investigations.

Given the conflict of interest and other questions that Craig’s conduct raised, Brian said, “the fact it wasn’t preposterous for that person to come back to be nominated for FEMA — that to me is the swamp” that Trump promised to drain.

Brian defines the “the swamp” as the cozy relationships between those in the executive branch with both former high-ranking federal employees as well as former members of Congress who become lobbyists pushing for more government contracts.

The public, she said, appears to define the “swamp” differently. The public considers federal workers to be “overpaid and not doing the work,” she said. “They’re the swamp the public wants drained.”

Brian conceded that there are times when the use of contractors might be prudent — for short-term projects, for example. But she is concerned that federal agencies increasingly are being staffed by people who know how to manage contractors, but who lack the expertise crucial to fulfilling the missions of federal agencies and serving the public.

That trend is likely to continue. Despite their growing role in government, contractors largely operate under the radar. And the federal Office of Personnel Management, critics say, has done little to help agency managers choose the right companies to do the work.

Indeed in 2016, when Sen. Elizabeth Warren (D-MA) looked into federal contractor misconduct, she found that contractors had underpaid 300,000 workers and exposed thousands of workers to dangerous workplaces.

This year, federal agencies lost one source of federal information about contractors when Congress repealed a new Obama administration regulation that would have required contractors to report any violations of labor laws concerning wages and worker health and safety.

Fortunately, Brian says, nonprofits like POGO and Good Jobs First have done the research to build their own databases on contractors. But the research is not easy, she adds. It takes one-full time staffer to look for US attorneys’ press releases, and media accounts of contractor misconduct, she says. “The lack of federal information is ridiculous.”