The highly anticipated release of long-withheld US government documents related to the assassination of President John F. Kennedy is scheduled for October 26. In the runup to this event, the media have devoted more attention to this history-altering political murder than at any time since the Oliver Stone film “JFK” came out in 1991.

As one of the outlets digging deep into the tragedy, WhoWhatWhy has pointed out that many questions remain unanswered and many key issues are yet unresolved. Accordingly, we are dedicating more articles to the topic leading up to the highly-anticipated data dump, and we are putting together a crack team to analyze the documents once they are released.

The story of Captain James Young, a Navy doctor who said a bullet was found in President John F. Kennedy’s limousine on the day of his assassination, could have been corroborated by the president’s own physician. However, for unknown reasons, JFK’s doctor — Rear Admiral George G. Burkley, who was present in the trauma room in Dallas, and also at Kennedy’s autopsy — never got a chance to talk about the events of that day.

Below is proof that Burkley wanted to testify, and that what he had to say was suppressed at several levels. What survives is a memo concerning Burkley’s belief that other people participated in Kennedy’s assassination. Whether this opinion is based on the discovery of the bullet described in our earlier story, or something else, we will never know.

Although Kennedy was shot in the back, indicating the presence of a shooter behind him, there was also a suggestion of a shooter in front, according to some of the doctors at Parkland Hospital in Dallas, including the chief of Neurosurgery: Because of the condition of the skull and brain, he had the impression JFK was struck from the front or from the side, as opposed to the official conclusion of all shots from behind. Did Burkley have the same impression?

The year of the Warren Commission hearings. Thousands of people were called to testify, but Burkley was not.

In 1976, the US House of Representatives established the Select Committee on Assassinations (HSCA) to investigate the murders of Kennedy and Martin Luther King. Burkley tried to reach out to them through his lawyer, William Illig, as reflected in a March 18,1977 Memo to the File, written by Richard A. Sprague, chief counsel to the HSCA. Here is a key excerpt from that memo:

Dr. Burkley advised him [Sprague] that although he, Burkley, had signed the death certificate of President Kennedy in Dallas, he had never been interviewed and that he has information in the Kennedy assassination indicating that others besides Oswald must have participated.

It seems that nothing ever came of this.

This opinion — “that others must have participated” — is reflected in the JFK Library Oral History Interview of Burkley in 1967. When asked if he agreed with the Warren Commision as to the number of bullets that entered Kennedy’s body, Burkley responded, “I would not care to be quoted on that.”

Every time there’s an official investigation into the Kennedy assassination, all kinds of astounding facts come to light during hearings behind closed doors — but those facts are buried beneath mountains of minutiae, often recorded on faded Xerox paper.

In contrast, the reader-friendly books and reports summarizing these hearings, such as The Warren Report, published in 1964, are all well-packaged and pre-digested for easy swallowing by the media and the public.

From these summaries, you would never guess what was in the material their authors were supposed to have summarized. And they contain many more words devoted to undermining the witnesses.

The Final Report of the Assassinations Records Review Board (ARRB) contains stunning examples of deception based on euphemism, vaguery, and omission. What follows is how the authors of the Final Report handled the memo from George Burkley’s lawyer to the HSCA, in their chapter, “Medical Evidence.”

There were three closely related problems that seriously impeded the Review Board’s efforts to complete the documentary record surrounding the autopsy: a cold paper trail, faded memories, and the unreliability of eyewitness testimony. An example of the cold paper trail comes from Admiral George Burkley, who was President Kennedy’s military physician and the only medical doctor who was present both during the emergency treatment at Parkland Memorial Hospital and at the autopsy at Bethesda Naval Hospital. In the late 1970’s, at the time of the HSCA’s investigation, Dr. Burkley, through his attorney, suggested to the HSCA that he might have some additional information about the autopsy. (Page 123)

From this bland statement, you might think Burkley was referring to something both indefinite and possibly trivial — instead of a definite claim (true or not) that challenges the very foundation of the official story. As mentioned above: “he has information in the Kennedy assassination indicating that others besides Oswald must have participated.”

They did finally admit that Burkley believed in conspiracy. But they did so without acknowledging that his belief was based on first-hand information, and they buried it in a place where you would not expect to find it — in the chapter “Pursuit of Records and Information from Non-Federal Sources.”

Burkley’s personal attorney apparently told the HSCA that his client believed there was a conspiracy to kill President Kennedy. Mr. Illig, Burkley’s attorney, however, is now deceased. The Review Board staff asked Burkley’s daughter, the executor of his estate, to sign a waiver allowing the Review Board access to papers at Illig’s law firm, but she declined to sign and return the waiver. (Page 131)

Notice the wording: he “apparently told the HSCA” — as if it had only been a rumor; as if they could not confirm the rumor because Illig is dead; as if no paperwork existed documenting Burkley’s comments to Illig which, in turn, were conveyed to the HSCA. That Memo to the File still exists: 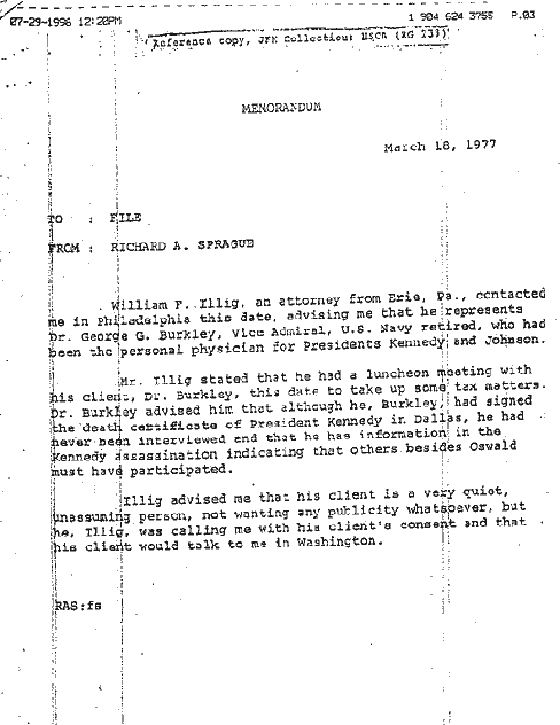 We may never know what it was George Burkley saw or heard that made him believe Kennedy was killed by conspiracy, but he certainly wasn’t the last to believe it.

Correction 1/22/2019, 2:30 p.m.: An earlier version of this article incorrectly stated that Captain James Young himself found a bullet in the limousine. Young inspected the bullet, but it was found by others.