Trump’s lack of experience navigating international politics was on full display earlier this month when he spoke on the phone with Taiwan’s president, violating a Washington policy that dates back several decades and infuriating China. Luckily, for all the complexities of the East Asian arena, there is no shooting war there at present. He and his similarly untested team will face far more convoluted and dangerous choices in the Syrian civil war, a festering conflict that has already drawn in just about every regional and global power and destabilized a number of key US allies.

Syrian government forces, backed by Russia and Iran, are in the final phase of rolling over Aleppo, which was the most significant urban stronghold of the rebels. Not only the eventual fate of the US-supported insurgency is on the line, but also Europe’s cohesion in the face of the worst refugee crisis in almost a century.

This leaves Turkey, embroiled in its own spiral of chaos, authoritarianism, and anti-Western sentiments, with a golden if precarious opportunity to play arbiter over both issues. In doing so, analysts say, it is likely to step on the toes of either Russia, the US, or both.

This summer Turkey sent a force, composed of both its own soldiers and allied Syrian militants, to occupy a chunk of neighboring northern Syria in an operation it dubbed “Euphrates Shield.” It’s a challenging area, riddled with different militant groups and swept by chaotic battles, but the Turks, who boast NATO’s second-largest army, appear determined to stay.

A Buffer Zone for Refugees

“Given that the Battle of Aleppo has been all but won by the Syrian-Russian joint front, Turkey is seeking to carve out not so much a zone of direct geopolitical influence but rather a de facto chunk of Syrian territory for a buffer zone,” George Voloshin, an expert on Eurasian affairs at the geopolitical consultancy Oxford Analytica, told WhoWhatWhy in an email. Ostensibly, he said, the zone would exist to house refugees (close to three million Syrian refugees currently reside in Turkey alone) and to ensure adequate border protection against ISIS and other radicals.

“[Turkish President Recep Tayyip] Erdogan now wants to get as much as possible in view of a future peace negotiation by settling the terms of Syrian peace directly with Russia.”

Turkey’s ambitions, and Europe’s likely compliance, are arguably Machiavellian. Erdogan, who endured a failed military coup attempt in July, recently (again) threatened to flood Europe with refugees after coming under criticism for trampling human rights and civil liberties. So most observers have doubts about the depth of his altruism either toward the refugees or Europe.

Turkey first proposed a buffer zone in northern Syria, a safe area for rebels and refugees protected by international forces, about a year ago. Analysts say its real motivation has been partly to hedge against a complete rout of the rebels it supports, but mostly to stop the Kurds. The Turkish government has been seeking to suppress the Kurds at home and also wants to block them from carrying out their self-styled experiment in radical democracy by merging their autonomous areas in northern Syria.

Now Erdogan is trying to form such a safe area alone. He is facing an incredibly complex landscape: one of the many challenges is the ambiguous status of the Kurdish militia, which Turkey considers a terrorist force but which has been the most reliable US and European ally on the ground against ISIS. The Kurds have also received support from Russia and some rebel factions, and they have largely remained neutral toward the Syrian regime, whose forces are also present in the same area just north of Aleppo.

Nevertheless, experts say, there is promise as well as danger in Turkey’s adventure in its southern neighbor. What happens next depends on Erdogan’s moves as well as on the success of US and Russian attempts todefuse the conflict between Turkey and the Kurds.

“If Turkey would really nation-build in northern Syria, you would have an option that’s not Assad,” said Joshua Landis, a prominent Syria expert at the University of Oklahoma, who runs the Syria Comment blog.

“If Turkey wants to impose a full-on occupation in northern Syria, in which they will provide good governance, a police force that can bring stability and accountability to northern Syria so that the international community can go and live there, and help rebuild and invest money, with a true commitment to long-term occupation, then there could be rebuilding and investment, and it could reverse the flow of refugees so that Syrians in Turkey could begin going back,” he said.

Crucially, this does not have to mean a partition of Syria, which has been a significant option on the minds of observers in recent years. Landis sees the “dreamy” scenario, as he calls it, as a possible experiment in non-violent competition, where rebels, regime and possibly Kurds are given a chance to demonstrate who can build the best, most democratic and prosperous, Syria. The winners, then, might be able to convince the others to join in their project.

“If you could stabilize [a rebel enclave], you would be in a sense in a race, like there was between East Germany and West Germany, to see who would be a better Germany,” Landis added. “If you could get a viable Syrian rebel state that could be rebuilt and provide some good governance, maybe the rest of Syrians would eventually say, ‘hey, I want to be part of that state. I don’t want to be part of an Assad state.’ ” 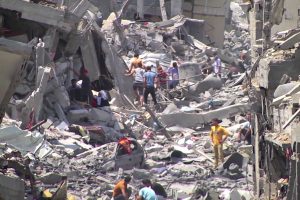 As dreamy as this may sound, it might well be the EU’s preferred course for Syria, as the Union reels from a surge of populism and right-wing sentiments and looks forward to a year of unpredictable elections. In fact, if a December 3 report in The Times is to be believed, the EU has recently offered something to Assad that could result in just that: significant financial aid and recognition of his continued rule over much of the country in exchange for a “peace deal” with the rebels.

Navigating a Dangerous and Fragmented Area

There is a lot that could go wrong. The area is flush with jihadists. Plus, there is no telling how Assad will act — and without his cooperation and that of the Kurds, a full-blown peacekeeping operation could easily turn into a nightmare for Turkey.

“My personal opinion is that anybody who gets into Syria is a fool,” said Landis.

“The Syrians are so fragmented and so divided amongst themselves that you get sucked in—it’s like herding cats. And there is no right answer. Because whoever you promote, there are going to be three or four different groups that are furious. … And the Syrian government is going to exploit that. The Syrian government is probably licking its lips right now at the thought of how it’s going to draw Turkey into this swamp — by promoting Arab groups that will fight against those that Turkey is promoting, and that will ultimately kill Turks. The Kurds will want to do it — they’ll think that if we can just bleed the Turks, they’ll leave.”

Four Turkish soldiers were killed and nine wounded by an alleged Syrian airstrike on November 24. So far in the Euphrates Shield campaign, Turkey has lost at least 19 soldiers and suffered more than  100 injuries. Some saw the air strike, which happened on the anniversary of Turkey’s downing a Russian bomber jet over the border last year, as the latest in a series of warnings from Russia and the US to Turkey.

Currently, there are two key Syrian cities to watch, Al-Bab and Manbij, which Turkey, together with the disparate rebel alliance it leads, has vowed to take.

Al-Bab is held by ISIS. Kurds — for whom it is the last obstacle to forming a contiguous territory in Syria — and Syrian regime forces have also trained their sights on it.

Manbij is held by the Kurdish-led Syrian Democratic Forces alliance.

“Various Turkish officials have made clear that what they want is for the SDF/YPG to completely withdraw [from Manbij] and move to the [east of the Euphrates] river,” said Ege Seckin, a Turkey expert at the London-based analysis firm IHS.

“There are some reasons to think why that might not be possible or why that is unlikely, the first of which is that a lot of the SDF groups, whether we talk about the Sunnis or the Kurds in Manbij, are actually locals.”

Another reason why Turkey may have to soften its objectives has to do with its own domestic security: Seckin pointed out that the Kurdish movement, both in Turkey and in Syria, is currently focused on the goal of joining and developing its territories in Syria. If that aim is frustrated by Turkey, he said, the Kurds would likely shift their attention back to the Turkish mainland, where Kurdish rebels are already fighting the Turkish army and police.

“[Violence in Turkey could escalate] especially if we see a transfer of the expertise and the weaponry that the YPG have in their control over to the Turkish side,” said Seckin. “I’ve heard from some sources that there is now a tunnel network that crosses between [the Turkish and Syrian cities of] Nusaybin and Qamishli across the border — an underground tunnel network very similar to what is the case in Gaza, for example. The Israeli military have not been able to completely root out those networks, and I am sure the Turkish military would also have a very difficult time.”

The main reason Turkey has been able to propose a buffer zone as a credible option in Northern Syria wasits reconciliation with Russia this summer, reassuring skeptical observers that a buffer could be made safe for refugees.

“It can be safe only if the Russians provide an assurance to the Turks and to the US that they will not try to disrupt this plan,” said Seckin. “The reason why [in early 2016] we predicted that it was so difficult for that to happen was because of the continued risk [of conflict] between Turkey and Russia… Bottom line, now it is much easier.”

Trump’s ascendancy to power in the US could also propel the plan — in a way that shows just how complex and unpredictable the situation is.

“I am thus inclined to think that the Trump administration may want to play Russia and Turkey off against each other (one could well say: “Again?”) in order to set Russian ambitions back a little bit,” said Voloshin, explaining that he draws this conclusion more from the people Trump has chosen for his cabinet rather than from the President-elect, whom he considers “a loose cannon.”

“Supporting the buffer zone at the expense of Syria could be a way of doing so.”

But, experts agree, there are lots of things that could go wrong.

2 responses to “No Learning Curve: Syria Will Immediately Test Trump”