I trekked to Austin, Texas, in March for South by Southwest — to see what the self-proclaimed cutting-edge minds of America (and the world) are doing about the challenges that face us. What I found was a reflection of the self-absorption and destructive head-in-the-sand, or nose-in-the-navel, approach that is only hastening our potential demise as a species.

This annual mega-festival is one of the most talked-about cultural phenomena in the world. Tens of thousands come to imbibe a vast range of offerings from the frontiers of music, film and technology. And to be completely surrounded by stimulating sights, sounds, ideas, and conversation about what’s trending and why.

Instead of boldness and breakthrough, though, I found a corporate-dominated fun-fest for those who like whatever is cool at the moment, and wish to get a leg up in one’s industry. 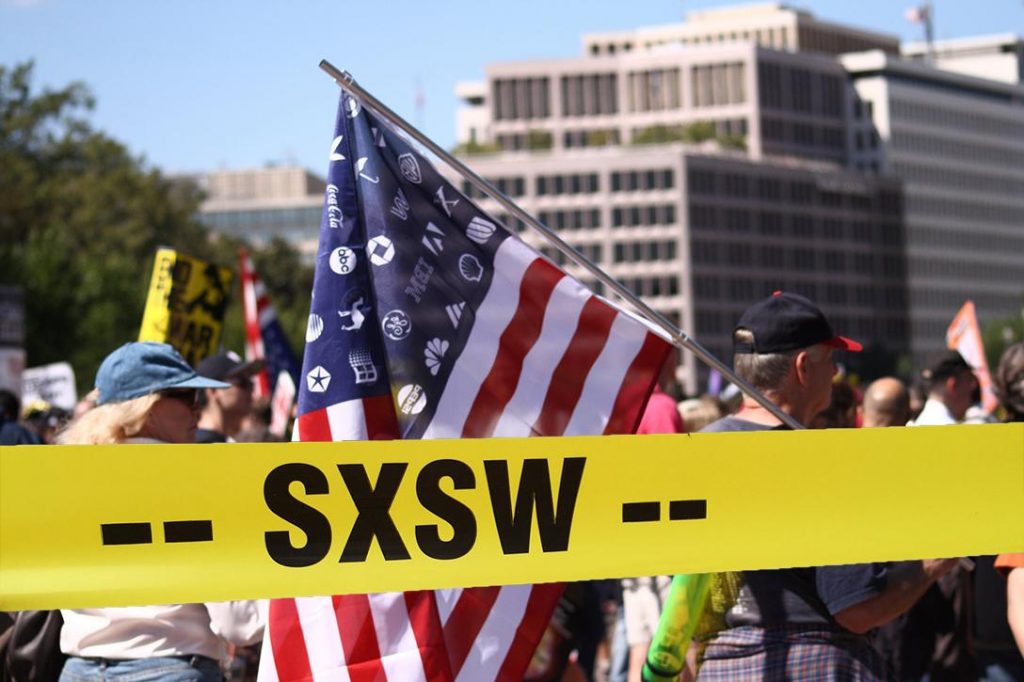 What are our priorities?
Photo credit: Adapted by WhoWhatWhy fro

More people, it seemed, were eager for the latest in “personal experiences,” sampling orgasmic new heights of gaming, meeting angel investors, getting in on the newest Uber or Airbnb. When they could be bothered to even look up from their various digital devices. The keynote speakers, if you were among the fortunate to get in to hear them, were the President of the United States and the First Lady.

I attended one panel after another praising strategies and gizmos that would apparently enhance one’s performance if not personal branding.

There was a certain desperation in the air — a terror of irrelevancy.

As Interactive SXSW gave way to musical SXSW (and since every “really good” restaurant in town was long booked up by the swells), I found myself wandering from one sponsored “taco meetup” to another beer-fueled, aspirant band performance policed by no-nonsense British or Spanish trade functionaries. 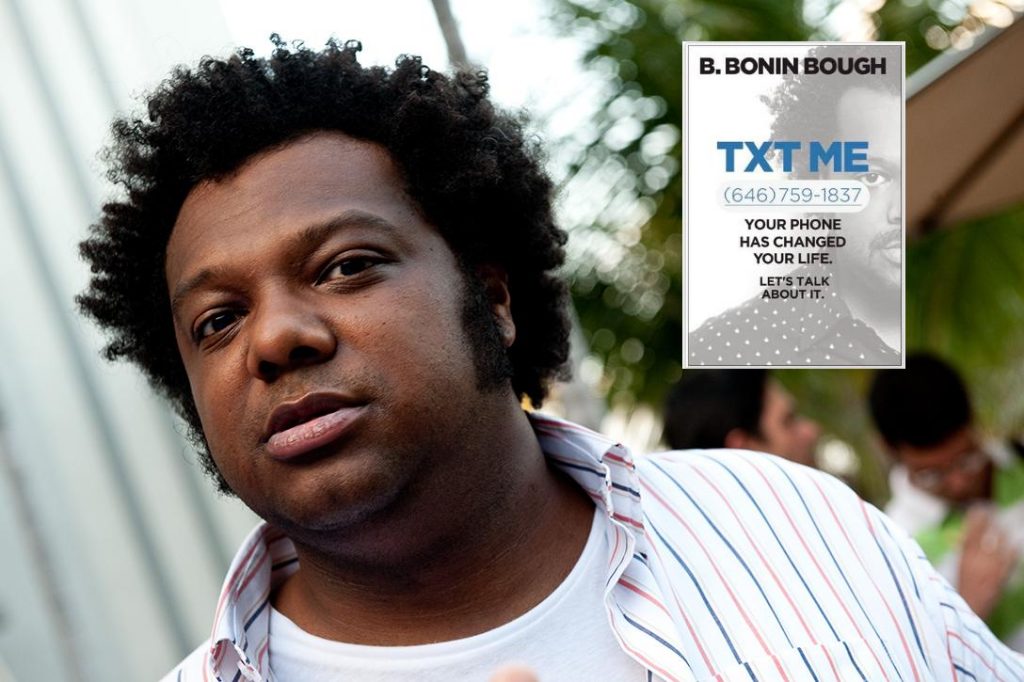 Bonin Bough, author of “TXT ME. Your Phone Has Changed Your Life. Let’s Talk About It.”  Photo Credit: Josh Hallett / Flickr (CC BY-SA 2.0)  and BenBella Books

My growing disappointment was crystallized when I was approached by a person handing out copies of a hardcover book.

The free book — with a hip looking young black man, complete with stubble and wild hair, on the cover — was titled “TXT ME.” Just below the title, in large letters, was a real number to text. And below that, it said, “Your Phone Has Changed Your Life. Let’s Talk About It.”

A quick glance inside revealed that the book was some kind of gimmick from a food conglomerate, and that one of the recent noteworthy happenings at SXSW was when the author — apparently something of a “SXSW star” — introduced a machine that made custom Oreo cookies.

The future, he said, with eyes glowing at just the thought of it, was unlimited. Someday, we could go to the market the day after the Super Bowl, and buy Oreos emblazoned with the logo of the winning team. (Let’s put aside the irony of a large corporation using a black man to promote Oreo Cookies. In some circles, an “Oreo” is a person who is black on the outside and white on the inside. But this enterprising fellow was Kraft Foods — now rebranded as Mondelez International — inside and out.)

Everywhere I looked were logos and brands, people offering to teach us new ways to market stuff that we didn’t know we needed until these people told us we did.

To be sure, a small slice of the programming was high-minded and dedicated to the environment, social justice, and inventions that actually matter. But that was truly a twig bobbing in a sea of froth.

And, I must add, one kind soul accepted my rather late proposal for a panel on the media and democracy — although, when I got there, the sign on the door erroneously announced a different subject, and the panel seemed to have gotten lost amid the vast number of simultaneous competing offerings and the general exhaustion. The small audience looked like they were having their minds blown by a vigorous counter-culture discussion.

Look: SXSW is huge — and I caught a number of noteworthy films, saw a few intriguing technological advances, got a few new ideas, met pleasant enough people. But c’mon. It’s getting a little late in the day. We need to head in a whole new direction and not obsess on a better way to make cookies. We need less consumerism. And definitely less stuff. More boldness, more edge, more willingness to challenge orthodoxies to their face. The much-vaunted “disruption” — about something more than headphone efficiency.

I was reminded of this when, right after SXSW, I headed north to the Dallas area, where I spent a day with Gary Shaw, a retired architect who was one of the earliest researchers into the assassination of John F. Kennedy.

Shaw told me that he had been invited to SXSW way back in 1991, when its co-founder and managing director Roland Swenson held a panel on the JFK assassination. Swenson was not just superficially riding the popularity of the about-to-be-released film JFK. He also co-hosted an annual conference in Dallas called the Assassination Symposium on Kennedy (ASK), which lasted for four years.

“During this period,” Shaw told me, “[my wife] Karen and I attended and worked in one of the SXSW events. Huge and wild!!! Both of us agreed that, percentage wise, there were more weird people there than at ASK!!!”

Austin’s informal municipal slogan, a bumper-sticker plea to resist the forces of greed, self-absorption, commercialization and conformity that increasingly dominate this country, is “Keep Austin Weird.” Well, it would be nice if the people behind cultural phenomena like SXSW figured out a way to keep their projects weird, too.

Oh, by the way, Oreos have 42 million Facebook likes. Sweet!

4 responses to “How We Lost Our Way: South By Southwest’s Squandered Potential”