As we watch President Obama being warmly welcomed in Cuba, we think back to the secret, shameful things done in the past by the US to undermine Castro, not counting the various assassination attempts. This report lays bare one of the more hair-raising schemes.

On March 13, 1962, the Joint Chiefs of Staff proposed to President John F. Kennedy that the United States attack itself — and blame Cuba. This is what is known as a “false flag” event.

This proposal came at the request of the CIA’s Edward Lansdale who was in charge of the anti-Castro project.

Kennedy dismissed it as lunacy, certain to lead to war. This set him on a fatal collision course with the most powerful people in the country.

This little-known proposal, code-named Operation Northwoods, is highly relevant today. It provides a crucial backdrop to the murderous mindset of those whom Castro — and Kennedy — had angered.  Moreover, we would be foolish to assume that  the basic nature of institutions has changed. The temptation to engineer so-called false flag events may simply be too great to resist.

Was Northwoods an anomaly? Certainly not. Creating provocations to justify action — by making it appear you are only reacting — has long been a ploy of many governments, over time and throughout the world.

The United States has hardly been immune to the temptation to shape events, opinion, and historical trajectories: An explosion on the US battleship, The Maine, in Havana Harbor, may have been designed to build public support for the American takeover of Cuba; the Gulf of Tonkin incident, an attack blamed on the North Vietnamese to justify widening the Vietnam Conflict; Operation Gladio, in which terrorist attacks in  Europe in the 1970s were blamed on leftists but engineered by right-wing networks supported by American intelligence. And WhoWhatWhy has covered the recent use of falsified atrocities to justify the overthrow of Muammar Qaddafi and the strategic grab of that valuable North African real estate.

So it is no surprise that many Americans do not trust their government when it assures them it was caught completely unawares by the 9/11 attacks. Because past is prologue, we would do well to learn the particulars of Northwoods.

Peter Dale Scott — professor of English at Berkeley, former Canadian diplomat, poet, author of several critically acclaimed books on the pivotal events of America’s recent past — has unusual insight into such events. Here is a short excerpt from his book, American War Machine: Deep Politics, the CIA Global Drug Connection, and the Road to Afghanistan (Chapter 9: “ 9/11 and the American Tradition of Engineered Deep Events.”):

We know that the Pentagon was capable of planning atrocities as pretexts for war from the series of documents known collectively as Project Northwoods.

Northwoods was a JCS [Joint Chiefs of Staff] response to a request from Edward Lansdale, who in 1962 was chief of operations for the anti-Castro Cuba Project, also known as Operation Mongoose.

Lansdale had asked “for brief but precise description of pretexts which would provide justification for US military intervention in Cuba.” (1) The JCS document, signed by JCS Chief Lyman Lemnitzer, obliged with a list of false-flag possibilities such as the following:

We could develop a Communist Cuban terror campaign in the Miami area, in other Florida cities and even in Washington. The terror campaign could be pointed at refugees seeking haven in the United States. We could sink a boatload of Cubans en route to Florida (real or simulated). We could foster attempts on lives of Cuban refugees in the United States even to the extent of wounding in instances to be widely publicized. Exploding a few plastic bombs in carefully chosen spots, the arrest of Cuban agents and the release of prepared documents substantiating Cuban involvement, also would be helpful in projecting the idea of an irresponsible government.

This was only one of nine paragraphs in an annex proposing a menu of (in its words) possible “provocation” and “deception” against Cuba.

[Ed: To read about more of these proposed engineered events, please go here.] 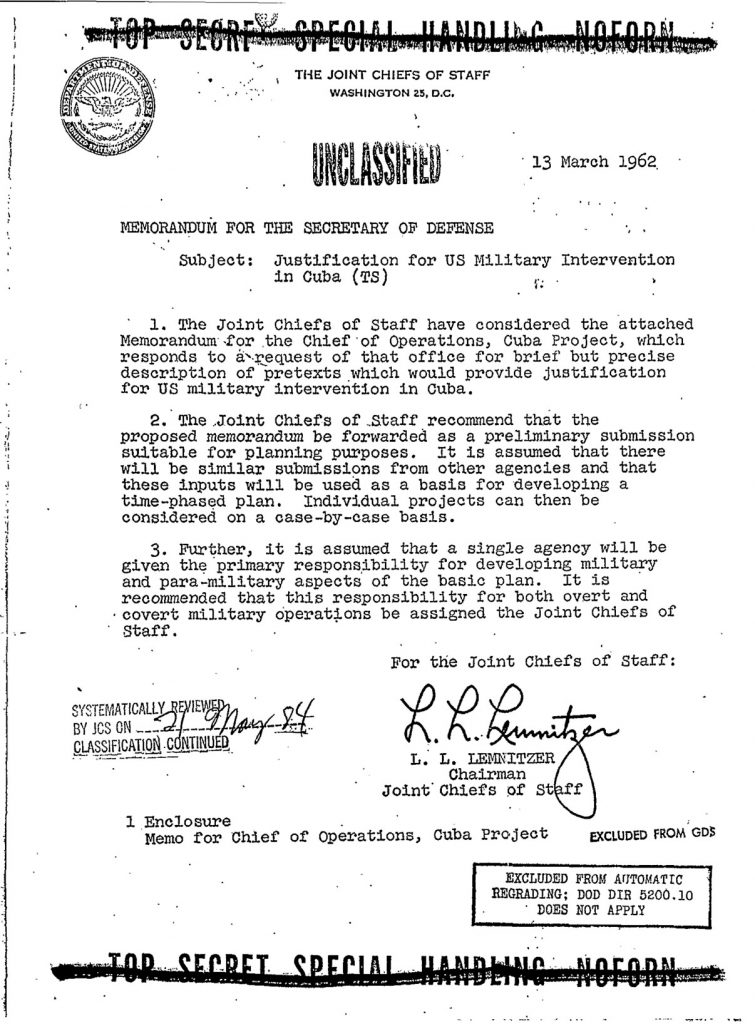 That Lemnitzer would forward such a provocative document is not surprising. Only a few months earlier, in July 1961, he had joined CIA Director Allen Dulles in supporting a plan for a nuclear surprise attack on the Soviet Union “in late 1963, preceded by a period of heightened tensions.”(2)

Air Force General Leon Johnson later told the National Security Council that the JCS estimated a preemptive strike would result in “at least 140 million fatalities in the USSR.”(3)

One year later, in May 1963, another JCS document continued to write of “engineering a provocation as a pretext for invasion” and argued that “the engineering of a series of provocations to justify military intervention is feasible and could be accomplished with the resources available.”(4)

This document was prepared by J-5, the JCS Directorate of Plans and Policy, “in response to a request [of March 25, 1963] from the Chairman of the JCS to provide comment and recommendation concerning the requirements for and desirability of fomenting a revolt in Cuba, giving consideration to the advantage of engineering an incident as an alternate cause for invasion.”(5) This chairman was Kennedy’s choice to succeed Lemnitzer, Maxwell Taylor.

(Taylor is generally remembered as the advocate of a flexible response rather than “massive retaliation” to deal with international crises. But he is also the general who, from as early as 1961, was meeting with other hawks “to get Kennedy to… use military force in both Laos and South Vietnam.”(6) Significantly, Taylor as JCS Chairman in 1963 was simultaneously promoting J-5 plans for escalated attacks, or 34A Operations, against North Vietnam.)

All this Cuban planning was in support of JCS OPLANS 312 (Air Attack in Cuba) and 316 (Invasion of Cuba). These were not theoretical exercises but actively developed operational plans that the JCS were only too eager to execute.(7)

(It is not generally realized that the blockade of Cuba, now enforced for almost a half century, began as the first step in planning for OPLAN 316.) (8)

In support of these plans, J-5 served as a workshop for manufacturing pretexts, or what we may call deep deception events. As James G. Hershberg wrote in 1990,

A review of Pentagon planning makes it clear that for a small circle of high civilian and military officials, the idea  that the United States might deliberately provoke events in Cuba that could serve as a pretext for U.S. intervention represented a possible course of action, frequently invoked, rather than an unthinkable libel that had emerged from the paranoid fantasies of Havana and Moscow.(9)

At least one of the false-flag deceptions envisioned in the Northwoods document — “Cuban’ shipments of arms which would be found, or intercepted, on the beach” of another country — may have been implemented.

Venezuela announced in November 1963 that it had discovered on a Venezuelan beach a cache of Cuban arms, consisting of rifles, machine guns, and ammunition.

This was shortly after John F. Kennedy had asked CIA Director John McCone for evidence of Castro’s intervention in Venezuela “that could be presented in a Public forum, such as the OAS [Organization of American States].”   [Especially after the agreement with Khrushchev not to invade Cuba, Kennedy was obsessed with stopping a wider spread of Castroism in Latin America. His request for evidence, however, should not be interpreted as an invitation to manufacture it.]

CIA officers brought one of the cached rifles to the Kennedys, and Richard Helms reports that the president responded, “Great work.”(10)  [Ed: To learn more about this episode, please go here.]

7.  g., Memorandum from the Joint Chiefs of Staff to President Kennedy, November 16, 1962, JCSM-910-62, http://avalon.law.yale.edu/20th_century/msc_cuba186.asp: “The Joint Chiefs of Staff are glad to report that our Armed Forces are in an optimum posture to execute CINCLANT OPLANS 312-62 (Air Attack in Cuba) (1) and 316-62 (Invasion of Cuba). (2) We are not only ready to take any action you may order in Cuba, we are also in an excellent condition world-wide to counter any Soviet military response to such action.”