Anybody who has played a sport will have had a coach who told them that, win or lose, you’ve got to keep playing hard until the final whistle. But when the game is over and you’ve lost, it’s equally important to admit defeat, shake hands and move on.

But the GOP’s evangelical base likely won’t allow their presidential candidates to do that with gay marriage—and they could end up paying a heavy price next November. Last week could well have been one of the decisive moments in the race for the White House—not so much for the Supreme Court’s ruling itself as for the Republican reaction to it.

Instead of shaking hands and moving on, which admittedly is difficult on an issue as charged as gay marriage, most Republicans seem determined to keep playing as if the outcome hadn’t been decided. And even those who begrudgingly accepted the Supreme Court ruling may find themselves severely hobbled by the recalcitrant views of the GOP base.

Jeb Bush and Marco Rubio, possibly with an eye toward the general election, noted that they were not pleased with the outcome but were ready to move on. Rand Paul tried to stay on the sidelines and later declared that maybe it’s time to get the government out of the marriage business altogether. It’s not a coincidence that the trio is among the frontrunners and not vying for the title of “Tea Party darling.” 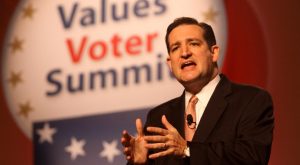 Even after the Supreme Court declared that gay marriage was legal in all 50 states, Ted Cruz told states to ignore the ruling. Photo credit: Gage Skidmore / Wikimedia Foundation

Most of the other candidates, to varying degrees, played to the evangelical base. Mike Huckabee was sure that “Jesus wept,” while Ted Cruz wanted to vote out Supreme Court justices and told states to ignore the ruling. Scott Walker wants a constitutional amendment allowing states to reject gay marriage, and Bobby Jindal indicated that the decision is an assault from the left on First Amendment rights. In one of his signature perplexing moves, Rick Santorum compared gay marriage to global warming as the issue most important to the survival of the country.

Instead of accepting SCOTUS’s gift of taking the issue of gay marriage off the table, candidates who are competing for the top spot among evangelical Christians are trying to outdo each other with angry responses. This could very well force candidates like Bush and Rubio to swing to the right, giving up a good position for the general election and alienating the majority.

The numbers show how much of a losing issue gay marriage is for the GOP.

Rarely has public opinion swung so quickly and thoroughly on a major and controversial issue. According to the Pew Research Center, there has been a nearly 20% shift in favor of gay marriage within a decade—from 36% who supported it in 2005 to 57% who are in favor of it this year.

That stands in stark contrast to abortion, for example, where roughly the same percentage of people consider themselves “pro-choice” and “pro-life” now, as 20 years ago.

Opposition to Gay Marriage is Dying—Literally

And numbers prove that public acceptance of gay marriage is a trend virtually certain to continue. Pew polls show that those with a neutral or negative view of gay marriage tend to be Americans aged 55 and older—of which, according to the CDC, more than 2 million die annually.

Baby Boomers are somewhat split on the issue, but 53% of the “Silent Generation” (70 years old and up) does not support gay marriage at all. Part of the problem for Republicans is that some three million people whose views on this issue align with the evangelical ring will be dead when it’s time to go to the polls in 2016.

Worse still, those dying voters are being replaced by millennials—the strongest supporters of gay marriage with almost 3 out of 4 in favor. From now until next November, an additional 6 million of them will become eligible to vote.

This puts the Republicans in a tough spot: either alienate potential voters, or alienate their loyal base. White evangelical Protestants are the group most opposed to gay marriage, by 70% to 27%.

By remaining vehemently opposed to gay marriage, the base is forcing Republicans to make a fruitless choice—either remain on the wrong side of history, or lose the nomination to someone who would rather be right-wing than President.