NATO allies lost a common enemy when the Cold War ended, but they soon found a new use for their spies: going after each other, according to former CIA official Michael Scheuer. That is why the revelation from WikiLeaks that the National Security Agency (NSA) spied on at least three French presidents should come as no surprise—least of all to the French, who are probably doing the same thing to the Americans. The news certainly didn’t surprise Scheuer, now a professor at the Georgetown Center for Security Studies.

“I suspect the French probably knew we were listening, and now they have to go through the act and there will be some cold period between us and them over it,” Scheuer told the BBC. A closer look at the US embassy certainly could have tipped off the French.

US MO: Spying Shed Atop Embassies

In 2004, a “spying den” was added to the roof of the US embassy in Paris, yielding direct lines of sight to French government buildings, the paper Libération, which worked with WikiLeaks in disclosing the information, noted. The paper published a picture of that addition, saying it has fake, painted-on windows. A similar structure sat atop the US embassy in Berlin and reports indicate they can be found elsewhere across the world.

Scheuer likened the post–Cold War climate of intelligence gathering to the 19th century, saying “that nation states look out for themselves.” Before that, the former spy noted, NATO countries refrained from spying on each other. In those days, national security, not commercial interests, dictated government behavior. 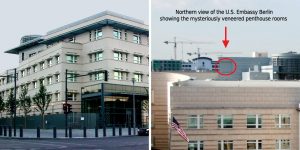 The US had spy perch similar to the one recently reported in Paris atop their embassy in Berlin as well. Photo credits: De-okin / Wikimedia / PanchoS / Wikimedia

“It’s certainly a different age that we live in,” Scheuer said. “We’re in a situation where we’re all competitors now. There is no need for unity.”

Because the international community lacks that one-for-all unity, it’s unlikely the revelation that the US was spying on German Chancellor Angela Merkel or three French presidents will have any major repercussions. Of course, the target countries have to make a big deal out of how unacceptable that type of behavior is, while summoning the US ambassador for a diplomatic rebuke. But protesting too much would be counterproductive, since everyone assumes that France and Germany and other European countries are doing pretty much the same thing.

“We probably shouldn’t be so shocked,” Scheuer said. “Everybody is listening to everybody now.”

To the ex-CIA officer, spying is just business as usual. He says that the timeline of spying on the French, which started at least under George W. Bush and was continued under President Obama until at least 2012, makes sense. The US was probably initially interested in the country’s plans for Libya, an area where the French took the lead, in how the French were reacting to the global financial crisis and, more recently, in what President Francois Hollande’s plans were for Mali.

Even though the US keeps getting caught, thanks to document releases from WikiLeaks and the disclosures from Edward Snowden, Scheuer indicated that it is in the interest of the US to keep spying on its allies for now, which is exactly what’s happening.

“I’m very sure we want to keep an eye on what the Bulgarians and the East Europeans are doing vis-a-vis the Russians,” he said with regard to the newer NATO members.

If the geopolitical situation changes, Scheuer thinks that the allies may give up their not-so-secret embassy dens. But once a spy, always a spy: If NATO members begin to view Islamists as a more serious threat than they do now, Scheuer thinks they may just combine forces again.