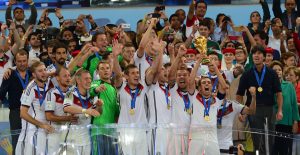 Corruption charges and reports of inhumane working conditions leading up to the 2018 and 2022 World Cup events may undercut the cheering at these international soccer showcases. Photo credit: Wikimedia Foundation.

We long ago learned that nothing in big-money sports is “just a game.”

Under recently confirmed Attorney General Loretta Lynch, the US Department of Justice (DOJ) has indicted nine top soccer officials, including two current vice presidents of FIFA, arguably the most powerful body in world sports, on charges that include racketeering, money laundering and wire fraud.

The question of whether embattled FIFA president Joseph “Sepp” Blatter will finally be forced to step down has drawn the attention of world media. But behind these headlines lurks a story of migrant laborer exploitation that could make life difficult for Russia and Qatar, Blatter-regime-approved sites of upcoming World Cups.

Parallel US and Swiss investigations into FIFA could have consequences reaching far beyond the world of soccer. Opponents of Russian President Vladimir Putin and his actions in Ukraine will likely use the FIFA corruption investigations to try to strip the country of the right to host the 2018 World Cup. This would combine politics and sports in a way not seen since the US boycotted the 1980 Moscow Olympics and the Soviet Union and its allies retaliated by staying away from the Los Angeles games four years later.

Qatar’s stock market dropped sharply upon the news of the investigations. This is a clear indication that at least one of the future World Cup hosts feels as though it is not as much of a lock that the tournament will take place there as FIFA would have the world believe.

Several current and former FIFA officials were arrested in Switzerland early Wednesday; they are awaiting extradition to the US. The indictment also named a total of five US and South American sports marketing executives.

“The indictment alleges corruption that is rampant, systemic, and deep-rooted both abroad and here in the United States,” Attorney General Lynch said. “It spans at least two generations of soccer officials who, as alleged, have abused their positions of trust to acquire millions of dollars in bribes and kickbacks.”

US officials left no doubt that the indictments and arrests were just the beginning.

“Today’s announcement should send a message that enough is enough,” said Acting US Attorney Kelly Currie in the DOJ press release. “After decades of what the indictment alleges to be brazen corruption, organized international soccer needs a new start—a new chance for its governing institutions to provide honest oversight and support of a sport that is beloved across the world, increasingly so here in the United States. Let me be clear: this indictment is not the final chapter in our investigation.”

Indeed it is not. While the current US investigation focuses primarily on corruption involving marketing and broadcast deals, Swiss prosecutors simultaneously seized documents at FIFA headquarters in Zurich, as part of their probe into whether officials were bribed to award the 2018 World Cup to Russia and the 2022 World Cup to Qatar.

Together, the investigations could have far-reaching consequences for the world’s most popular sport, which has long been plagued by allegations of corruption. But whether the probes will explore the human rights abuses in the construction of World Cup venues is uncertain—though these abuses are at the very core of why this scandal should be of interest beyond the sports world.

Too Hot to Play?

The decision to award the 2022 World Cup to Qatar was controversial for two reasons. One has to do with the scheduling of the event itself.

The climate in the tiny, oil-rich nation dictates that the World Cup would, for the first time, have to be held around Christmas, because extremely hot temperatures would make competition dangerous in the summer months. Moving the tournament from its usual summer schedule is opposed by the powerful European soccer federation UEFA, which is not generally supportive of Blatter’s heavy-handed, 17-year rule as FIFA president.

But what’s been happening in Qatar since it was awarded the 2022 tournament would appear to provide an even more serious reason for re-thinking FIFA’s decision.

According to numerous reports, migrant workers making the country World Cup-ready have had to endure inhumane living and working conditions reminiscent of well-documented human rights violations in Russia leading up to the 2014 Winter Olympics in Sochi. 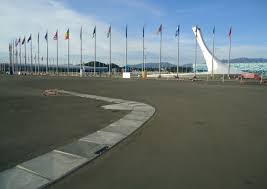 Inhumane working conditions leading up to the Sochi Olympics in Russia led to the condemnation of Russia in 2014. Will Qatar face similar blowback? Photo credit: Wikimedia Foundation

While the International Olympic Committee largely turned a blind eye to the conditions in Sochi, the shake-up at FIFA may create more pressure for reform. And the clock is ticking: unless changes are made, the International Trade Union Confederation (ITUC) estimates that at least 4,000 migrant workers in Qatar will die by 2022 because of substandard worksite conditions.

For their own reasons, which have more to do with organizational in-fighting than moral outrage, factions in both FIFA and UEFA may use the indictments of FIFA officials to try to strip Russia and Qatar of the upcoming tournaments. Coincidentally, geopolitical conflicts may lend weight to their efforts.

Just last week, Sens. John McCain (R-AZ) and Bob Menendez (D-NJ), who ironically has also been indicted on corruption charges, took the unusual step of sending a letter to delegates of the FIFA Congress that is scheduled to be held Friday in Switzerland.

In the letter, the two lawmakers ask delegates to deny current FIFA President Sepp Blatter a fifth term in office, because he continues to support the decision to hold the 2018 Cup in Russia.

“Given Russia’s ongoing violations of Ukraine’s territorial integrity, and Putin’s efforts to undermine the principles of multilateral cooperation, shared norms, and international security agreements, we believe that allowing Russia to host the World Cup would bolster the Putin regime at a time when it should be condemned,” McCain and Menendez write.

But Blatter and his agenda are not easy to dislodge. Just last week, two of his rivals pulled out of the race for FIFA president, with one of them, former Portugal soccer great Luis Figo, blasting the way the organization is run.

Yet FIFA spokesman Walter de Gregorio told reporters in Zurich that there would be no re-votes. Whether Blatter gets his way this time, as he usually has for the past 17 years, remains to be seen.