An Open Letter to Our Readers: The Case for Democracy - WhoWhatWhy
Reading Time: 4 minutes 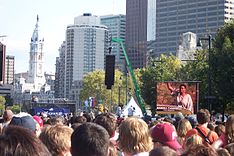 A 2008 voter registration rally in Philadelphia.

In the US political process, very few people run for federal office and a few more bankroll these campaigns. A tiny percentage of the electorate donates smalls amount of money or large amounts of time to the candidate of their choice. Others give what they can spare: space on their rear bumpers or in their front yards, or, perhaps most importantly, their time. For the vast majority of Americans, however, active involvement in the political process is limited to casting ballots.

Many of them are not even taking advantage of that privilege. This hinges on a variety of reasons, ranging from personal to ideological, and oftentimes the result feels as if elections increasingly resemble a pantomime of democracy. But if our democracy is to have any chance at all to work, voting rights must be held sacrosanct. This means that each person who is eligible to cast a ballot must be allowed to do so, and that every one of these ballots must be counted accurately. That is the very foundation of democracy.

Tragically, that foundation is under assault. 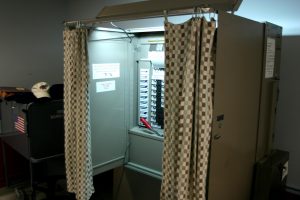 A voting booth at the University of Buffalo.

It’s looking more and more like a system that puts offices up for sale… and business is good. There are plenty of people and groups on both sides of the ideological divide who are willing to put up tens of millions of dollars or even more to make sure that those who get elected do their bidding. Other threats to our democratic process include (but are no way limited to):

• State legislatures that try to limit instead of expand ballot access;

• Voting machines that operate haltingly and without sufficient oversight;

• Making votes in some states count less than those cast in another; and

• Gerrymandering, which ensures that only a very small percentage of congressional districts are competitive.

Unfortunately, the system is not set up to do much about any of these things. On the executive branch level, the Federal Election Commission (FEC) is largely powerless. In most cases, it will issue fines to candidates and individuals who violate campaign finance laws—and these fines are generally a drop in the bucket compared to the billions of dollars that are being raised to buy the politicians’ loyalty.

Most members of the legislative branch are fine with a system that ensures that the seats of most incumbents are safe. Even if an office holder is voted out, a lucrative lobbying gig is waiting for a loyal servant of big-money donors.

With regard to the judicial branch, the Supreme Court recently opened the floodgates to additional billions in “dark money” donations from individuals, corporations, private-interest groups and foreign entities.

When the courts and the legislators themselves show no interest in defending core democratic values, that leaves the press and ordinary citizens.

Starting now, WhoWhatWhy is assembling a team of reporters and other volunteers to cover these issues as well as the presidential race as a whole. The growing team includes veteran journalists, a former Senatorial candidate, enthusiastic young reporters, and college students willing to write for a byline. Just as citizens can participate in democracy in a variety of different ways, we are asking for your assistance in this endeavor.

We know that not everybody can donate money to help boost our coverage. However, we are asking you to volunteer your time. If you are interested in joining the team, please contact us. If you have a tip about something that is eroding the foundation of democracy, please tell us. This is especially useful for any local effort that restricts access to the ballot box. If we write about something that more people should know about, please forward our stories or link to them on your own networks.

Here are some of the types of stories we will delve into, with your help:

—Two watchdog groups are calling on the FEC to end the charade of shadow candidates. Shadow candidates are politicians, among them Jeb Bush, who are pretending not to run for the presidency while already out there campaigning and raising huge sums of money—all in an effort to sidestep recordkeeping requirements and contribution limits.

—In Kansas, Beth Clarkson, a professor with a PhD in statistics, last week filed a lawsuit requesting access to the real-time audit logs of voting machines in Sedgwick County. Clarkson believes that there is an irregularity in voting patterns that can only be checked by auditing the electronic voting machines. What the pattern allegedly shows is that GOP support reflected as a percentage increases with the number of votes cast in a district. This appears to be counterintuitive, as Republicans do better in rural areas, where fewer ballots are cast. Clarkson’s work is an extension of an academic study, which first drew attention to this anomaly in 2012.

Millions of Voters Were “Too Late”

An innovative study involving two researchers and Google estimates that an additional 3–4 million Americans would have been eligible to vote if registration deadlines had been extended until Election Day in all states. Their research simply took into account how many people searched online for “voter registration” in the run-up to an election.

“Many Americans sought information on ‘voter registration’ even after the deadline in their state had passed,” the authors of the study stated. This research makes a strong case for opening up the registration process in order to allow as many eligible voters as possible to cast their ballots.

We at WhoWhatWhy will bring these and other issues to your attention in the months ahead. We invite you to join us in our efforts to to revitalize this quadrennial exercise, and justify its potential.

7 responses to “An Open Letter to Our Readers: The Case for Democracy”