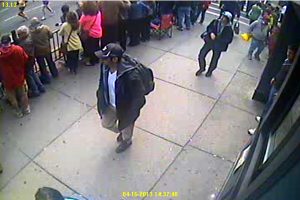 Tsarnaev Brothers on the day of the marathon bombing. FBI handout.

What do former Massachusetts Gov. Deval Patrick, an appeals court justice, several potential members of the Boston Marathon bombing jury and thousands of regular Americans have in common?

They all believe that they’ve seen a video of accused bombing suspect Dzhokhar Tsarnaev dropping a deadly backpack behind victims at the marathon on April 15, 2013—a video his defense said “does NOT actually exist.”

In a pre-trial hearing yesterday, Tsarnaev defense attorney David Bruck argued that the April 18, 2013, press conference in which former Boston FBI Special Agent in Charge Richard DesLauriers identified the brothers should be excluded from evidence. That, he argued, is because the FBI agent described the video footage that doesn’t really exist, which subsequently was used to convict Tsarnaev in the media.

U.S. District Judge George A. O’Toole ordered the defense and prosecution to edit the recording of DesLauriers’ press conference in a manner satisfactory to both sides. He reserved the right to rule on the defense’s motion to suppress the entire recording if the two sides can’t agree.

Still, how is it that so many people believe they’ve seen a video that doesn’t exist? And, why, if it doesn’t exist, was this farce allowed to continue for nearly two years?

As WhoWhatWhy pointed out last month, verbal intimations by government officials, video of Tsarnaev and his brother walking down Boylston carrying backpacks like thousands of other marathon-goers and a TV re-enactment are all that’s ever been “seen” by the public.

The only time a video of this nature has been seen is in a National Geographic docu-drama entitled, “Inside the Hunt for the Boston Bombers.” The video, however, was not actual footage of Tsarnaev, but a re-enactment of video the FBI said it saw. The grainy footage wasn’t even shot in Boston—actors created the scene on the streets of Phoenix, Arizona.

The issue of the video was even considered a reason to move the case out of Boston, with one 1st Circuit Court of Appeals judge comparing it to a televised confession in a landmark Supreme Court case involving prejudicial pre-trial publicity.

At a Feb. 19 hearing, appellate Judge Juan Torruella asked whether a “video of Tsarnaev placing a backpack at the site of the bombing” was “the same thing” as Wilber Rideau’s TV confession. In Rideau, the U.S. Supreme Court overturned his 1961 murder conviction because his confession was broadcast widely in the parish from which his jury was drawn. Tsarnaev’s attorneys cited the Rideau case in their attempts—so far futile—to argue that such publicity has hurt their client’s right to a fair trial in Boston.

And now, as the opening of the trial draws near, inferences and Hollywood re-enactments may be all that’s left of the so-called video evidence of Tsarnaev dropping a backpack.