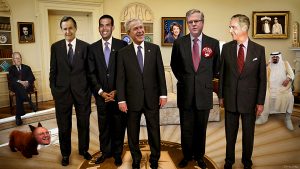 The Bush Dynasty and Friends. Collage by DonkeyHotey.

We are all dunces, are we not? At least that’s what the big media seem to think.

Both Jeb Bush and Barack Obama are men who have openly and publicly struggled with their ambivalence about their family inheritance. Both responded by leaving the place of their youth to create new identities for themselves: Barack Obama, as an organizer in the poor African-American neighborhoods of Chicago; Jeb Bush in Mexico, Venezuela, and at last in Cuban-influenced Miami. Both are men who have talked a great deal about the feeling of being “between two worlds”: Obama, in his famous autobiography; Bush, in his speeches. Both chose wives who would more deeply connect them to their new chosen identity. Both derived from their new identity a sharp critique of their nation as it is. Both have built their campaign for president upon a deep commitment to fundamental transformation of their nation into what they believe it should be.

Frum, selling the old patriotic snake oil, is identified in the article as a “senior editor at The Atlantic.” Does that name ring a bell?

So we’re getting our “trusted” journalistic assessment of Bush Son #2 from the man who helped create Bush Son #1’s trio of terrors—Iran, Iraq and North Korea—the  “Axis of Evil.”

Frum may be a master distracter, but how can he possibly think you will accept his comparison of this son of privilege with Obama, who began his career as a nobody, a half-black guy out of nowhere? (Whatever connections you ascribe to Obama via his mother’s USAID ties, they simply don’t rate at all.)

On the other hand, if Frum wanted to find a real basis for comparison, he certainly could have: neither Jeb nor Obama can be his own man. The system simply doesn’t allow it. Neither can have a “deep commitment to fundamental transformation” and neither can make the country “what they believe it should be.”

Why? Because nearly all who get to the top are at the beck and call of others who are wealthier and more powerful. These others consider most “issues” a joke. They don’t care about immigration so long as their plants and mines are adequately staffed—at adequately low wages. Nor do they care about the other hot-button causes that define campaigns and their coverage.

In this one way, to be sure, these political animals, and their parties, are plenty alike—enough to make us weep for the “two party system” that never was.

But you will never hear that from David Frum.

8 responses to “MediaFail: Jeb Bush, the Media, and the Public as Dunce”