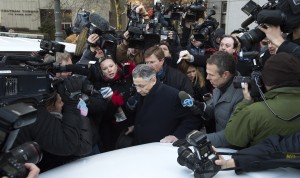 What is less well-known is how his and a string of other corruption cases are eroding democracy, one bribe at a time.

It would be easy to dismiss Silver’s prosecution as too provincial to care about, seeing as it involves only New York State. Undoubtedly, the arrest of a lawyer who held one of the state’s most powerful positions for 21 years was a seismic event in New York.

Much more, though, is at stake.

By several different measurements, New York is the most corrupt state in a nation that presents itself globally as the avatar of good governance, the rule of law and democracy.

The U.S. exports this view via one of the most stringent anti-corruption laws in the world, the Foreign Corrupt Practices Act of 1977. Congress passed it after a Securities and Exchange Commission report revealed that 400 U.S. companies had paid $300 million to foreign government officials, politicians and political parties.

In country after country, U.S. public diplomacy decries corruption as antithetical to democracy. This argument, of course, is selectively applied by Washington when other interests, such as national security, trump the global graft fight. The State Department repeatedly couches its anti-corruption statements in terms of the rule of law, arguing that graft helps prop up authoritarian leaders.

Why Play in a Rigged Game?

However, corruption has a much more insidious and direct effect on democracy than just helping dictators buy influence. A team at the University of Ottawa surveyed all democracies globally, and found that voter turnout fell as corruption increased.

So besides the economic damage and harm it does to the legitimacy of government institutions, graft is also chipping away at the essence of democracy—the participation of voters.

Perceptions of widespread corruption fuel a deeper cynicism about politics in New York and elsewhere, said Doug Muzzio, a political science professor at Baruch College. “This causal linkage is expressed as ‘Why participate in a rigged system?’ ”

Few political machines are as rigged as those in the Empire State, which birthed the infamous Tammany Hall that reigned over New York City via graft and patronage for more than 100 years spanning the 19th and 20th Centuries.

The allegations against Silver don’t deviate much from a familiar script.  Silver, a lawyer, created an all-but-fictional personal injury practice to hide his payoffs, according to U.S. District Attorney Preet Bharara. He earned them by, in one case awarding state grants to a doctor who sent asbestos claims to another law firm that employed Silver. In turn, it paid him referral fees and a salary. In another case, Silver sent real estate developers with business before the state to a law firm run by a former aide. He got a cut of the legal fees, according to the charges. Silver says he is innocent.

Even though Silver tried to remain as Speaker, pressure from fellow Assembly Democrats forced him to make way for the election of a new speaker on Feb. 10. However, he declined to relinquish the legislative seat he’s held since America’s Bicentennial, in 1976.

A New York State of Fraud

The public corruption crime wave reached tsunami proportions in New York in the modern era. More than 2,500 New York public officials were convicted of federal corruption charges between 1976 and 2010. Silver is the fifth state legislator charged with abusing the public trust since 2000, according to the good government group Citizens Union.

That’s helped contribute to New York’s falling voter turnout, according to Citizens Union Executive Director Dick Dadey. It now ranks 47th nationally, having dropped over the last 20 years from “the middle of the pack to the bottom of the barrel,” he told WhoWhatWhy. Nationally, turnout has remained relatively stable since the early 1970s.

The state legislature Silver sat atop is close to approving expenditures of more than $140 billion. If New York were a country, its annual spending would rank as approximately the 30th largest in the world by that measure.

It’s roughly on par with the yearly budget of Indonesia, which, coincidentally, suffered from decades of official theft under the U.S.-allied Suharto government, to which Washington often turned a blind eye.

Although it would be easy to say the comparisons end there, that kind of big money certainly seems to have inspired the type of criminal behavior associated more with banana republics than one of America’s original 13 colonies.

Maybe the very same anti-corruption advice the United States hands out in the name of protecting democracy abroad should be required reading at home, too.

This article was updated to reflect that Silver will be replaced as speaker next week.